END_OF_DOCUMENT_TOKEN_TO_BE_REPLACED

Posted by admin
· 128 Comments
Hello and Happy Monday to all. Have you recovered from the royal wedding weekend?
Official photographs from Saturday’s wedding were released today by Kensington Palace. The three images were shot at Windsor Castle shortly after the Duke and Duchess of Sussex returned from their carriage ride. END_OF_DOCUMENT_TOKEN_TO_BE_REPLACED

Today Kate and William were able to spend time enjoying Bhutan’s breathtaking scenery as they hiked to the iconic Tiger’s Nest Monastery high in the Himalayas. END_OF_DOCUMENT_TOKEN_TO_BE_REPLACED

Hello, we are back with a quick briefing on the latest from the Lindo Wing and several updates.

We begin with something new, The Very Latest here on the blog. I started the page because frequently there are little tidbits or newsbytes in between posts that merit sharing, and this seems an easy way to keep everyone up to date on that sort of thing. We will include notes and links that may not warrant their own full-blown post, like retail updates (items back in stock, sales, copyKates, etc.), or items we want to get published right away that we’ll expand upon in a later post. It has actually turned out to be very handy as we await the birth of Kate and William’s next child, but it will remain a permanent fixture here on the blog. From today’s Very Latest updates: We will keep everyone updated on Kate’s situation via Facebook, Twitter and our Very Latest page right here on the blog.

Moving on to the other topics, we have quite a few IDs that have been made in the last week, including one that resolves perhaps the Ultimate UFO here at WKW. Can you guess the item I’m referencing? Here is a visual clue.

Yes, it is the clutch that Kate has carried (and carried, and…well, you know the drill) for years, crafted in black suede with a petite grosgrain bow. Above we show the Duchess carrying the bag on a night out in Mayfair with William in 2012, as well as at the Order of the Garter in 2008. Here is a wide shot of Kate with the clutch on that 2012 night out. Many of us looked and looked, and then looked some more for the bag’s maker. Yet we were never able to determine who made the clutch, it has remained a mystery all these years. That’s until last week, when Brittany from the Repli-Kate It page on Facebook shared this post:

That is Kate’s bag in another color, discovered via an auction on eBay for a pink version of the handbag, that is where these photos are from. (The auction is over, it ended on the 23rd.) The bag is by Mascaro, it measures 8″ x 4.5″, with a concealed snap closure on the inside of the flap. A huge Tip of the Tiara to Brittany for solving the mystery, you can visit her Repli-Kate It page here, she is a whiz at putting together outfits, locating great repliKates, and more.

Mascaro is a brand whose accessories Kate has used for some time; below you see her carrying a Mascaro bag for the 2012 War Horse premiere, and wearing the brand’s heels at the 2011 wedding of Harry Aubrey-Fletcher and Louise Stourton. (We were fortunate that the inimitable Lizzie Darcy identified the heels several years ago.) Next, the necklace Kate wore to a youth reception and barbecue during the 2011 North American tour. We knew the Duchess was wearing the Logo Leaf Earrings by Vinnie Day, but the necklace hadn’t been identified. We now know the necklace is also by Vinnie Day, the company got in touch with Anna of My Small Obsessions to let her know it was a bespoke piece made especially for Kate. Also identified, the jacket Kate wore to the wedding of Peter Phillips and Autumn Kelly in May 2008. (In all candor, not my favorite look on the Duchess.) Again, the information came via MSO. The photo below is not from the Phillips/Kelly wedding, but from the wedding of Charlie and Lucy Savoy.

A Tip of the Tiara to Poppy Golightly on Facebook for making the ID and sharing the info with My Small Obsessions. 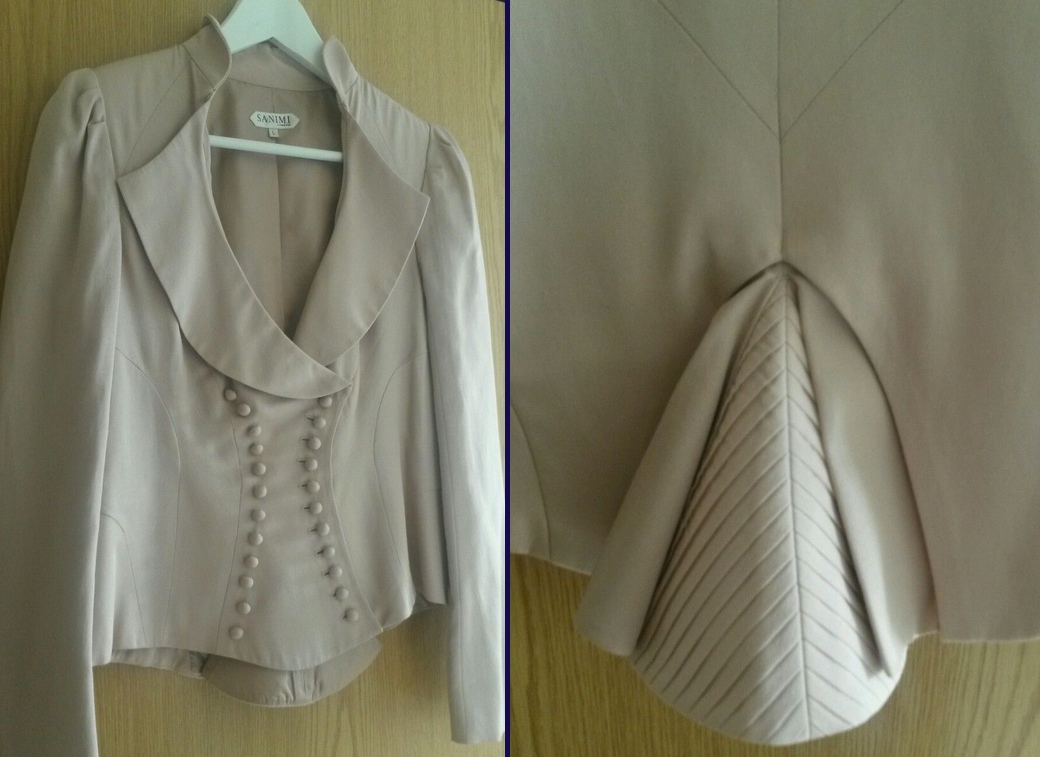 It seems Sanimi is no longer in business. From what I could glean online the company was located in North Kensington, it appears they specialized in party frocks, especially silk pieces, and perhaps lingerie. (Sources for items below: Pinterest, Clothes Agency, Pinterest.) Perhaps one of our readers will be more familiar with the brand, and can fill us in via a comment or email. One more item, it regards the jacket we have seen Kate wearing frequently and commonly thought to be by Barbour. Most recently the Duchess was seen wearing it when enjoying a playdate with George at Snettisham Park. It turns out the jacket is not by Barbour. Anna of My Small Obsessions contacted Barbour and they advised her it was not their piece.

Also today, Madderson London has released the maternity version of Kate’s ‘Naomi’ shift dress(£230), made of a lighter weight ponte jersey knit, and with only one set of the decorative flaps. The Duchess wore the Naomi in standard sizing (£450), it is a more robust weight, made of 100% wool. Kate’s Wrap Skater Dress in Polka Dot ($63) from the ASOS Maternity collection is back in stock. The Duchess wore the frock in March for her visit to the Brookhill Children’s Centre in London.

UPDATE: This dress is slightly different from Kate’s, despite ASOS calling it the “Kate” dress. Out thanks to Lisa, she left a comment alerting us to the distinction, so we put the two dresses side-by-side to better highlight the difference between the two, it’s the way the polka dots are placed. In the original frock the dots are scattered randomly with no seeming pattern; in the new ‘Kate’ (ahem) version the dots are more organized, almost in rows. We are fortunate to have some photos from a WKW Facebook friend wearing the dress. Rachael Tagg (who is not expecting), is one of many Kate fashion followers who purchased the frock. Rachael very much likes the dress, and I can see why – it’s a great fit on Rachael! And one more retail note, this one from Target,. where two Kate-favored brands have combined for a small capsule collection. We’re talking about Orla Kiely and Aden and Anais; they have come up with a selection of Swaddle-Plus 4-Packs ($39.99) and Little Bib 3-Packs ($15.99) . Orla Kiely for Aden and Anais at Target

We will be watching the goings-on at St. Mary’s Hospital almost around the clock, and will continue to update as warranted.