Kate is Casual for a Little Shopping

We have a very brief post to share with a look at what Kate wore when out shopping at one of her favorite retailers today, Peter Jones. I am unable to license the photos, but you can see them in this Daily Mail story.

Everyone will recognize Kate’s coat, it is the Reiss Rubik Houndstooth Coat, worn for yesterday’s engagements at the Action for Addiction Centre for Addiction Treatment Studies. Updating the coat’s availability since yesterday’s post was published shows the coat is becoming scarce:

Mary Smith, a WKW Facebook friend shared that she stopped at Bloomingdale’s to have a look at the coat in person; she tells us it is “gorgeous & the fit is amazing.”  Mary saw it at the Bridgewater, NJ store in sizes 0, 6 & 8; there were also quite a few at the Short Hills Bloomies.

The Duchess was wearing black tights, and had on a black turtleneck dress, or it might have been a top she would have paired with a skirt.

Kate’s boots are a style first noticed when she attended a SportsAid workshop in November of 2014. She is wearing the “HalfNHalf Stretch Rider” by Stuart Weitzman for Russell and Bromley . The boots have a stretch panel on the back and suede on the front; the photo lower right is digitally lightened to better show the difference between front and back. The HalfnHalf is still offered at Russell and Bromley (£395). In the US Stuart Weitzman carries a similar style called the 50/50. The biggest difference is the front of the boot, with that front panel reaching to the knee; the heel is also a bit shorter. A comment from Tara notes the 50 50 has come in two heel heights; below right you see the higher heel on a gray and black pair at Lane Crawford. With thanks to Brenda for the tip, we have a great repliKate to share: the Lands’ End Women’s Stretch Suede Tall Boots, also carried under the name School Uniform Suede Tall Stretch Boots. You can read more about the boot on our repliKate Footwear page or pop over to Lands’ End and have a look at the boots.

Kate carried her Tod’s D Style bag in grey leather, a piece she has had for a long time. We show the contemporary version of the bag at Farfetch ($1609) in the medium size. 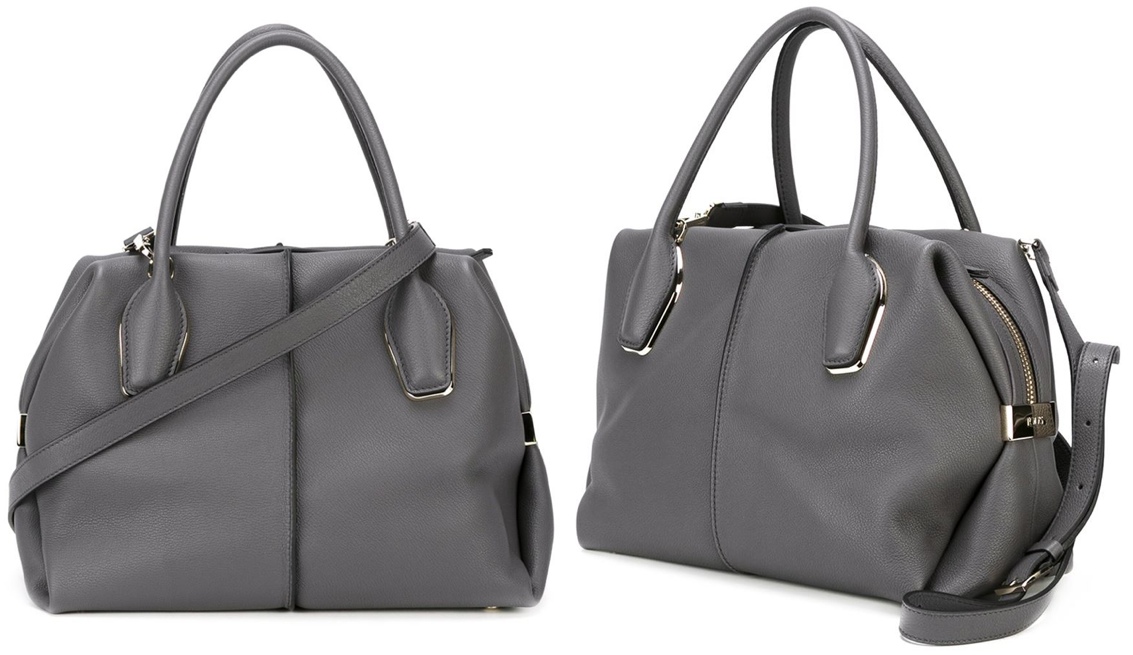 The D-bag is actually named in honor of Diana, Princess of Wales; she carried the original tote and the Italian leather goods firm renamed if for her.

More from The Handbag Concept:

Though it has been updated in style since its launch, with rounded corners and a zip, the style hallmarks are still there – quality leather, exposed stitching and a clean, classic design that screams luxury without flaunting an obvious designer label.

The Daily Mail’s story may be seen in its entirety here.

A quick retail update: the John Lewis cashmere cardigan Kate wore when out shopping in 2012 is back in stock in ‘toast,’ that is the color name. The ribbed band at the waist on this version of the cardigan is thinner than Kate’s, our thanks to Rochelle for pointing out this distinction.

This eBay auction has an image of Kate wearing the sweater. Our thanks to Jennifer and Sandra on the WKW Facebook page for the info on the sweater.

Our final tidbit this evening is related to Kate’s shorter hair. People has an interview with Richard Ward, who does Kate’s hair, offering possible reasons why she opted for the new length. From Monique Jessen’s story:

“It’s much easier to look after and takes half the time to blow dry,” says Ward…

“It’s a practical style and a great option for a mom who has had long hair, who has a busy life and is short on time,” the royal mom’s longtime hair dresser … tells PEOPLE. “It’s slightly more sophisticated but with all the benefits of long hair.”

We will see you Tuesday when Kate returns to the Anna Freud Centre for the organization’s annual Christmas party. Our other update involves another pair of boots, only these were identified some time ago. Here we show Kate wearing the boots when shopping in February 2012 and a closeup from when she was released from the hospital in December of 2012. Our final note today is also about boots, in this case, Kate’s favorite Rhumba boots by Aquatalia, the prize in our giveaway showcasing our fundraiser for EACH, one of Kate’s patronages.  The lucky winner is….