The day started with anticipation that was palpable. 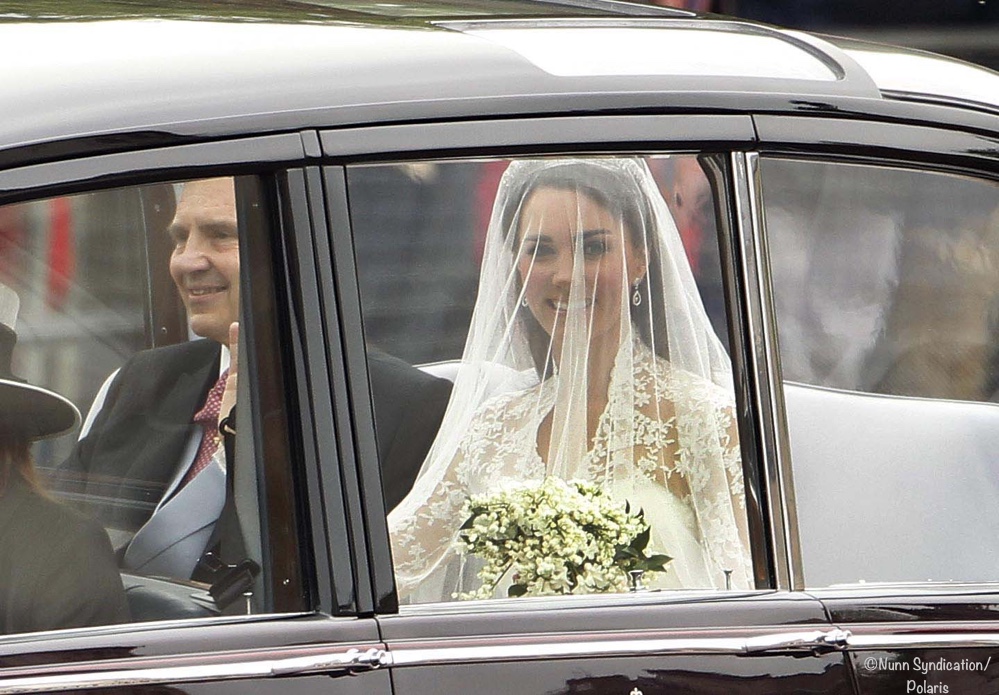 The drive from The Goring hotel only intensified the suspense. When Kate Middleton stepped out of the Queen’s vintage Rolls Royce onto the carpet leading into Westminster Abbey, she also stepped into an image that captivated the world. A wave to the crowd. 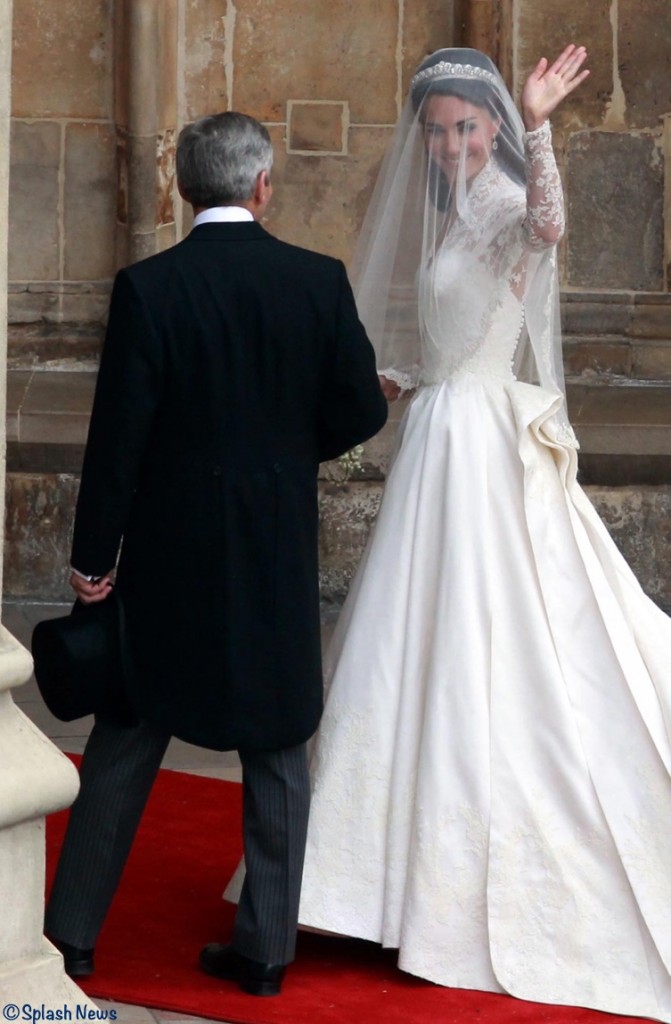 A final arrangement of the train. 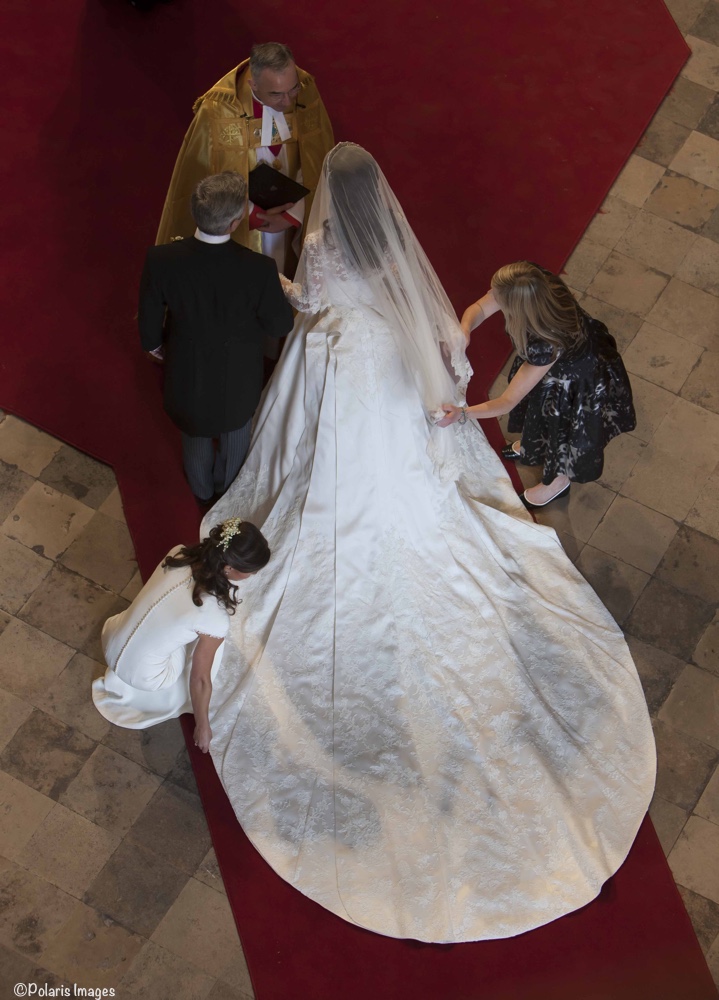 And it was time to head up the aisle. The dress was both ivory and white, with long lace sleeves and a high collar. 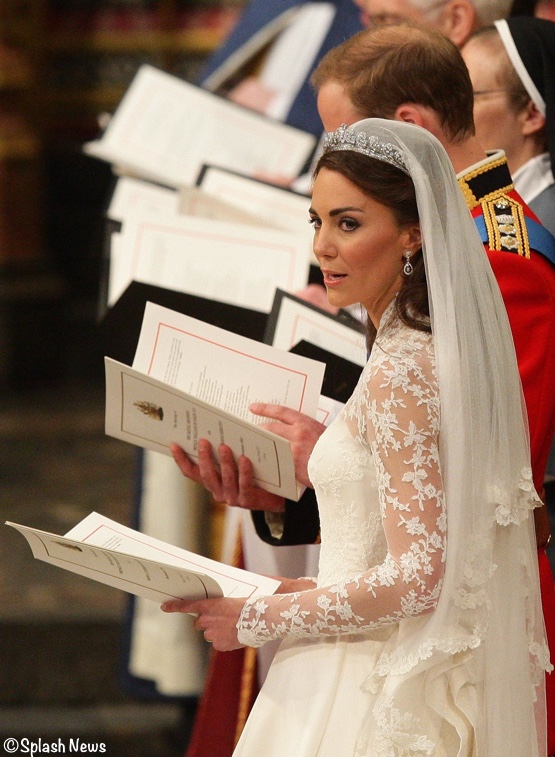 The train was just under nine feet. The dress design incorporated hand-cut English lace and French Chantilly lace, appliqued by hand. The work was done by artisans from the Royal School of Needlework, based at Hampton Court Palace. From the Palace news release:

“Individual flowers have been hand-cut from lace and hand-engineered onto ivory silk tulle to create a unique and organic design, which incorporates the rose, thistle, daffodil and shamrock. There had been much discussion in the media about Miss Middleton’s plans for her hair: would it be worn up, or down and loose? Would she wear flowers, as rumored, or a tiara?

The veil needed to be simple and it was, adding a sense of gentle softness to the look. Made of ivory silk tulle, it was hooped and lay flat, allowing the focus to be on the bride and her gown.  The Duchess wore a vintage Cartier tiara loaned to her by the Queen. 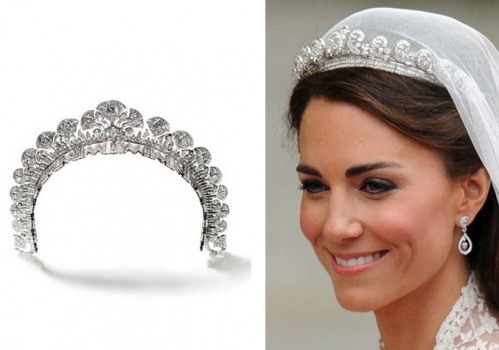 Her hair was styled in a demi-chignon. The tiara was originally purchased by King George VI in 1936.  That was the bride’s “something borrowed,” what was “something new”? The earrings worn by Catherine, Duchess of Cambridge, as she is now called. A gift from her parents, the drop earrings were shaped like oak leaves with a pave diamond acorn suspended in the middle. Sister Pippa wore a similar pair; both sets were made by Robinson Pelham, and are said to be inspired by the Middleton family’s new coat of arms, which includes oak leaves and acorns. Her wedding shoes, made of ivory duchesse satin were also adorned with hand-done lace, crafted by the Alexander McQueen team.

As expected, her bouquet was all white, with lily of the valley, myrtle, sweet william and hyacinth. Many wondered what Prince Harry said to William as Kate entered the Abbey.  The Telegraph used a lipreader; evidently, he whispered “Wait ’til you see her” or “here she comes” depending upon what version of events you believe. As for what the Prince said to his bride:

The gown was exquisite. The Prince wasn’t the only one reacting favorably to the frock, WWD (Women’s Wear Daily, subscription required) had reactions from some of the most renowned wedding dress designers in the world. From their story: Hundreds of thousands lined the streets to watch the couple’s carriage procession. The carriage entering the gates of Buckingham Palace. Up the steps and into the palace. A closer look at some of the younger members of the wedding party. The gown was restrained, exuding an understated elegance, not an easy combination to pull off.  Ms. Burton did it exceptionally well.  Below, the Duchess speaking with Julia Gillard, Australia’s Prime Minister. Other comparisons are inevitable, but many actually highlight contrasts more than similarities. While Princess Diana’s gown reflected eighties excess, today’s vision was much more down to earth. The bride wore the dress well; it did not wear her. The only other details we can think of related to what Kate wore today involve her makeup and nails. First, the nails, from Vogue UK‘s report:

“…a custom-blend for Kate’s nails, including Bourjois’s no. 28 Rose Lounge and Essie’s 423 Allure, to create the off-white bridal shade the Duchess-to-be was looking for.”

For those interested in a “similar” gown, Women’s Wear Daily shares the following from the king of knockoffs, Allen B. Schwartz Of ABS:

“Schwartz, who arose at 1:30 a.m., Pacific time, said he’ll use a different lace around the bodice and a polyester fabric for the gown. I’ll clean up the train and it’ll have the look and will be a lot more salable and a lot less pricy,” he said. He expects the wedding gown will wholesale for $400. Schwartz said he’ll start booking the dress for June 30 delivery.”

Tonight the Duchess was in another McQueen creation. More on that tomorrow.

We’ll leave you with a video via Westminster Abbey.

More than 24 million people in the UK watched the service on television as well as 23 million in the USA. pic.twitter.com/onWCH3XFUE