As we start to wrap up our ‘Best of’ voting we have the companion post to our ‘Favorite Tour Dress’ poll.

Because we didn’t want that previous post on dresses to have too many choices there are two looks from the tour being included with this poll, they felt like a better fit here. Unfortunately, by minimizing the previous post this one feels beyond overwhelming, I apologize in advance for that. A reminder, the top choices from the previous dress post and this post will have something of a fashion face-off as we attempt to ascertain the most popular apparel look, not including accessories.

Alexander McQueen Sailor dress (which I mistakenly recalled as being separates). The other tour look we wanted to include is this, the Whistles separates worn in Los Angeles. Amanda Wakeley’s navy silk mikado suit worn for the Darwen Academy visit in April, as well as for the official Royal Tour photograph. We saw another Issa on Kate, this one worn for a little shopping in April. The Blue Pleated Zara dress worn the day after the wedding, April 30, as Kate and William left the Palace grounds. (And also worn for Prince Philip’s 90th birthday church services.) The Reiss Shola dress was worn for William and Kate’s meeting with the Obamas in May. This year at the Epsom Derby we saw Kate in the Reiss Peacock Dress and ‘Nessie’ Tweed Jacket by Joseph. At Wimbledon, the Duchess wore Temperley’s Moriah in ivory. When previewing the exhibition showcasing her wedding gown with the Queen, Kate chose Joseph’s Scala dress. Kate wore the Amanda Wakeley Sculpted Felt dress for a visit with William to Royal Marsden. 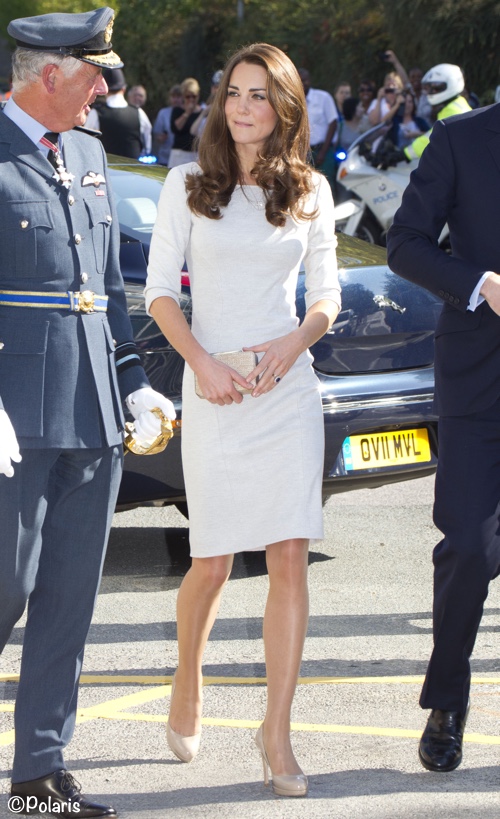 The Mulberry Pleated Shirt Dress in ‘cabbage’ debuted at the press reception in advance of the Queen’s Jubilee. We saw a return to Zara, Kate selected the Lace Tulip dress for the Gary Barlow concert fundraiser. For December’s visit to Centrepoint, we saw Kate in Ralph Lauren’s Turtleneck Dress in olive melange. This little lull in public appearances by the Duchess of Cambridge seems a good time to look at the remarkable impact she is having on the apparel and accessories industry.

Leading up to the wedding many columnists and fashion insiders played down the significance of the Duchess’s clothing and accessory choices, minimizing her potential as any kind of legitimate style influence. Some began to acknowledge there might be something there (ahem) as both dresses worn for the engagement pictures rapidly sold out; the intense interest in pieces Kate wore for official events brought even more weight to bear on the topic.

She’s not putting herself up on a pedestal and alienating herself from people who can’t afford the extreme high-level designers. She’s breaking the rules where she needs to,” says Marissa Webb, the head of women’s design for J.Crew.

While Diana famously drew from designers and fancy gowns, Middleton has gone for more affordable and accessible wear, including a Burberry trench coat that sold out as quickly as photographs of her in it surfaced.

They estimated that just a single appearance could generate up to $14million for a brand or its stockist.

Multiply that $14 million by just the number of appearances the Duchess will be making in the next month, and you’re talking about what titans of industry refer to as “real money.” Another way of looking at the math comes via Fashionista:

According to a Reiss spokesperson, traffic to their site was up 500% the day Kate wore the camel bandage dress, and a dress sold every minute.

The demonstration of Kate’s ability to move product is clear-cut, we’re guessing that the CEO of Whistles (a store included on our Kate’s Favorite Clothing brands list) has probably changed her mind since telling The Telegraph in March that the Princess had no impact:

“I don’t think Kate’s made a difference to sales: maybe a few hundred pounds. A pretty dress is a pretty dress; it’s going to sell, regardless.”

“And while Middleton has championed the midpriced designer line Issa and bespoke coats by Katherine Hooker, the only occasion when she’s worn a high-end designer was her wedding… Still, fashion watchers anticipate that Middleton will tap a top couturier when she starts attending black-tie galas in the future.”

The young couple was busy that last Friday of February, their second official appearance together was at the University where they first met, Saint Andrews in Scotland.

Miss Middleton and Prince William were on hand to help kick off the University’s 600th Anniversary celebration. Here is how each looked back in 2005 when they graduated.

It turns out the suit was by Italian clothier Spagnoli. The Daily Mail broke the news of “the Italian job”.  (Ahem.)

In doing so, she was retracing the fashion footsteps of Princess Diana, de Keyser’s premises were frequented by William’s late mother when the boutique was known as Emma Somerset.”

The designer told People magazine how she felt about Miss Middleton’s style choice:

“She looked stunning, and we are proud and flattered that a style icon for women of all the world like her has worn Luisa Spagnoli,” managing director Nicoletta Spagnoli tells PEOPLE. “The color red is perfect for her brunette hair and pale skin.”

The company offers a broad range of styles, below we show looks from the Spring 2011 collection. More looks from that group. The line has proven so popular Hollie de Keyser plans to open a Spagnoli shop just down the street from her own boutique.

We wouldn’t be surprised if soon Prince William is known as “the man who accompanied Kate Middleton to ______” (just fill in the blank), as opposed to “The Future King of England”.