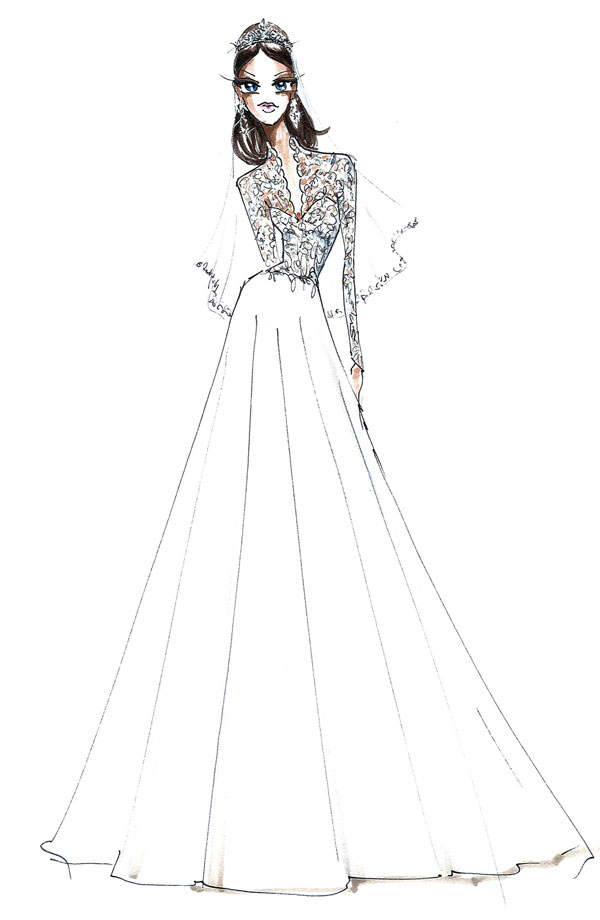 In the “imitation as the highest form of flattery” category (ahem), knockoffs of Kate Middleton’s wedding gowns are about to hit the market.

We were surprised to see Nordstrom offering an “in the style of…” dress, behold the JS Collections ‘Duchess’ Wedding Gown.

“…a royalty-inspired wedding gown designed with a corseted bodice and a beautifully full, pleated skirt that sweeps back into a three-foot train. A delicate lace overlay creates the long sleeves while also shaping the demure collar and low, scalloped V-neckline.”

The gown will be made of polyester with nylon lace (?) and may be pre-ordered now for September delivery. It is priced at $698 USD.  To see all of the styles in the fall JS Collections lookbook, click here. The WWD story details the changes Mr. Schwartz will make to lower the price point on the gown:

“..said he’ll use a different lace around the bodice and a polyester fabric for the gown. I’ll clean up the train and it’ll have the look and will be a lot more salable and a lot less pricy.” he said. He expects the wedding gown will wholesale for $400.”

The ABS dress will be available earlier than the JS Collections dress at Nordstrom, deliveries are expected to begin at the end of June.

Another company making a replica gown, Faviana. Below we see shots of that dress from The Daily Mail. Sketches of the Faviana style B219 Wedding Dress. The dress is also described as “Kate Middleton’s Wedding Gown in Chiffon French Lace and Chiffon,” rather close to that line we thought the Palace didn’t want crossed, the profiting-off-the-Duchess line. Here is how the dress is shown on the Faviana website.

The images above clearly show how a dress that is cut on the bias differs from one that is not.Â  This style will not be available until August.

For those interested in the topic, Counterfeit Chic has an excellent piece on the legalities of “CopyKates”. From that post:

“In the case of Sarah Burton’s Alexander McQueen creation for Kate, copyists can take comfort in the fact that, while the style is flattering to Kate and the many would-be dupliKates, the dress is not especially original.”

Many readers will recall the Robinson Pelham earrings worn by the Duchess; there is a replica on the market already, QVC is taking orders for Kenneth Jay Lane’s ‘Royal Wedding Earrings‘. The earrings are $39 USD, available in July, and knowing KJL’s work, probably of decent quality. From the QVC item page:

“”As soon as I saw the earrings on the royal bride, I was inspired to create a style that’s destined to become a classic. With good old-fashioned hard work and American ingenuity, we worked all weekend to bring it to you. Now, you can be the princess you deserve to be.”

There’s no doubt we will see many more imitations, we’ll keep you apprised as mandated by time and interest levels.