Whilst enjoying a bit of a breather here at WKW InterGalactic HQ (heh, heh, heh) we thought it might be helpful to update some of the most asked-about items under discussion of late.

We begin with the “It is Zara, not DVF” black and white dress, a frock Kate has been photographed wearing on several occasions. It turns out the dress is by Zara, several eagle-eyed WKW commentors shared that information; they knew because they own the dress. There are several eBay auctions underway offering the Zara dress, the two outer photos in the image below are from eBay UK auctions currently underway. 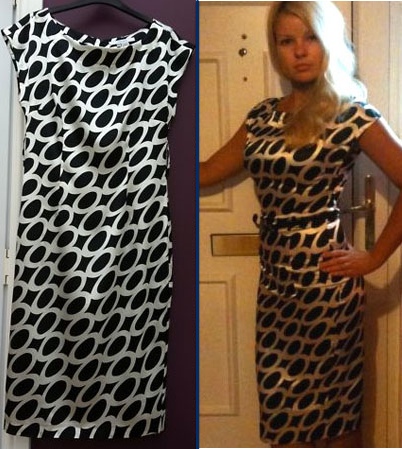 Next, we look at the dress worn by Kate the day before her wedding to Prince William. It has stumped your faithful correspondent, as well as our wonderful Facebook fans and friends. Many found it online at various sites, thinking it was this garment:

Looking at the image and then seeing it described as the Issa London Bird Print Skort Dress convinced me this was not the garment under discussion. Kate didn’t appear to be wearing a skort, it seemed to be a regular dress. Additionally, the ‘skort dress’ looked much shorter than what she was wearing at the Abbey and at the Goring Hotel the day before her wedding. Especially when one factors in how tall Kate is, it becomes clear it can’t be the shorter frock shown above.

Now if we could only sort out the sweater she is wearing over the dress… sigh. BTW, for those who also recognized the LK Bennett Maddox wedge (formerly known as the Greta wedge) shoes with the Issa dress, a heads-up: LK Bennett is making more available online *this* Friday morning (6.17.11) at some point between 5:30-8 am, that’s the only time window we have. They will be offered in both the back Kate is wearing above, as well as the taupe.

Friday, July 8:
*An evening reception at the Beverly Hilton, followed by a working reception at the home of the British Consular-General,
Saturday, July 9:
*A charity polo match at the Santa Barbara Polo & Racquet Club in Santa Barbara sponsored by Tiffany, William plays and Kate awards the prizes. For more on this function, click here.
*A black-tie reception in Los Angeles for BAFTA (British Academy of Film & Television Arts), Prince William is the President of the group. This will be black-tie, look for loads of young actors. (It will also be the toughest ticket in town that night.)
Sunday, July 10
*A visit to the Inner-City Arts School in a very rugged part of Los Angeles, a tour of Sony Studios, attendance at the Service Nation: Mission Serve job fair, a group working to help military men and women returning home.

To see Jamie Lowther-Pinkerton’s full statement on the trip, click here. (Including some words about that household help that was going to be hired for Kate & William.)

Hi Guys I have exactly the same black and white zara dress she has worn a lot, first seen when she was partying in London 2007 and most recently to a wedding this year. It's amazing how many followers it has, I have had messages form people from Australia to USA. If you're interested, here's the link xx

PS She looks a million times better than I ever did :)

about the last image you posted on facebook fan page, i don't think they were in darwen academy: her hairstyle is different and she doesn't wear a shell.

If you're in Los Angeles on July 8th, Prince William and Kate will be attending the Variety Venture Capital summit @ The Beverly Hilton.

I'm going for work but when I saw they were attending it made my day!

I bought two BCBG Ruffle Jackets today on Ebay! I got lucky because both were cheap and both were Smalls. I bought one in an off white/ivory color and a white one. I am going to compare the two when they arrive. I wonder if Kate got the off white one. In some pictures the jacket doesn't look white, and it looks more like an off white. I know the jacket came in mocha, black, and white. Maybe there was an off white color, too! Any ideas?

Hi - meant to also say that you may want to check http://www.rupertsanderson.com/high-heels/malone-grey-suede.html... Did she wear these pair the other day?