As many readers are already aware, there is good news to share today, Kate has been released from the hospital. The Duchess was released this morning, bundled up against the cold weather in a periwinkle scarf and black/navy checked coat, she was carrying a beautiful bouquet of bright yellow flowers. More from the Daily Mail:

A St James’s Palace spokesman said: ‘The Duchess of Cambridge has been discharged from the King Edward VII Hospital and will now head to Kensington Palace for a period of rest.

‘Their Royal Highnesses would like to thank the staff at the hospital for the care and treatment the Duchess has received.’ Kate had been hospitalized since Monday with Hyperemesis Gravidarum, a potentially life-threatening disease afflicting pregnant women.  She and William both looked very happy this morning, but Kate also appeared a little fragile. It is an enormous relief to see Kate out of the hospital. The Daily Mail interviewed Caitlin Dean, a spokesperson with Pregnancy Sickness Support, a UK resource for pregnant women coping with nausea and vomiting, as well as Hyperemesis Gravidarum.

She will need people to look after her, literally bring food to her and quickly, if she wants a piece of toast or an apple it needs to come straight away before a bout of nausea sets in.

The emotional side is going to be really tough on her. It’s just so unrelenting, you wake up thinking you’ve got a whole day to get through and this lasts for months. The coat is from the fall/winter 2010 collection. It is constructed of 40% wool/60% Cotton. The piece is in a navy and black pattern, double-breasted, with slip pockets on the front.

The Simyonette also features ruffled trim at the cuffs, shoulder and back. A better look at those ruffle details. 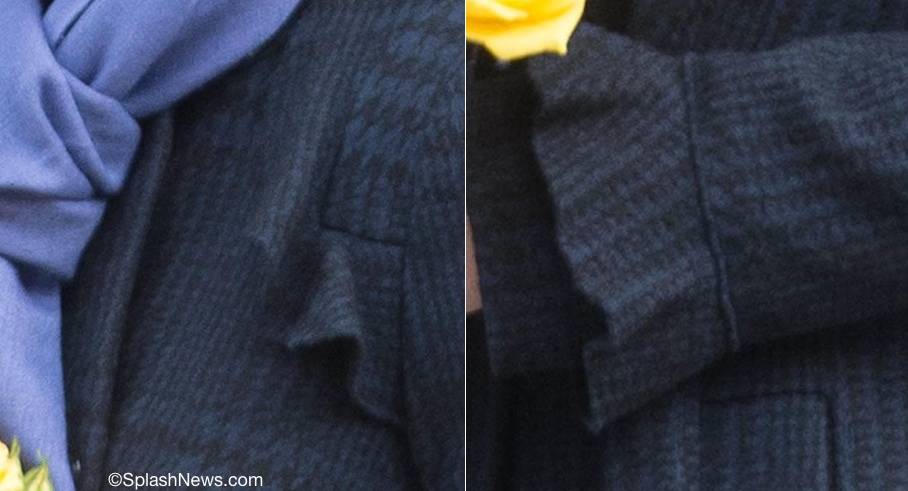 The coat originally sold for $675. (A fun little side note, the woman who found the coat is also named Kate.)
This is not the first Diane Von Furstenberg coat we have seen Kate wear, she has worn DVF for the last two Remembrance Sundays. Kate was also wearing what we think are her Charge It boots by Russell and Bromley. We don’t know the maker of Kate’s periwinkle blue scarf, should we find out who it is we’ll update the post.

One other note, The Telegraph had a column yesterday I think many readers will find interesting: “Back off, people – the Duchess of Cambridge is not a Brood Mare“. As one might deduce from the title, the piece examines the baby frenzy and fallout from same, especially the circumstances that arose requiring Kate’s pregnancy be made public:

Of course I share the excitement at the prospect of a royal baby, but every single mother I have spoken to this week has said that her main reaction has been one of anxiety for Kate. No normal woman wants her pregnancy discussed before the 12-week scan.

So back off, people. The unborn child, already in the international spotlight before its eyes have been formed, may be third in line to the throne, but first and foremost it is the darling baby of Mr and Mrs Wales. We would do well to remember that, and wish Diana/Dorothy/Philip/Michael/Elizabeth/Squeak and his/her parents all the luck in the world. Whatever it takes to keep both mother and child safe and healthy is ultimately the only thing that matters, I know readers agree with that sentiment.

That brings us to a reminder that Kate will not be at the next several engagements that were scheduled, Prince William is attending those alone.