We begin with a few updates, the first involving Prince William’s return to work in Angelsey…. or not.

There were multiple reports last week that William returned to work at RAF Valley in Wales, while at least one other story claims William remained with Kate and her family in Bucklebury.  Regardless, there seemed to be general agreement that the Prince spent this weekend at a bachelor party in honor of his friend James Meade, who will marry Lady Laura Marsham September 14. It is expected both Kate and William will attend the wedding.

William and friends visited Saunton Sands Beach in Devon (in southwestern England), known for its favorable surfing conditions. William is definitely expected back in Wales for his Wednesday appearance at The Anglesey Show.  More from the Daily Post:

Excitement is building after it was announced that the Duke of Cambridge will attend the Anglesey Show on August 14 to say a big thank you to the community before he departs the island after more than three years.

On his visit Prince William will be presented with a gift by show organisers, and will also meet young farmers.

The event, which is the largest two-day agricultural show in North Wales, will feature a collection of livestock of up to 300 cattle and 800 sheep. There will also be 350 trade stands featuring agricultural products, clothing, crafts and vehicles.

And there are expectations Kate will join him at some point before his tour of duty at RAF Valley ends in September. More from the Express:

However, a royal source has said that the mother and child will join Prince William at the farmhouse that the couple rent very soon.

The Express story notes that Kate, William and Prince George are expected to join the Queen in Scotland at some point during HM’s annual visit to Balmoral:

The family are due to holiday in Balmoral in the next few weeks, where Prince George will meet his great-grandad Prince Philip for the very first time.

In Bucklebury reaction to the Prince’s arrival remains positive. A store where Kate and her family have shopped, L. Interiors, is offering these in honor of the newest Royal. And Bucklebury Parish is offering a mug in honor of Prince George, this one created by Emma Bridgewater.

Our thanks to Bucklebury Farm Park for the tip on this item. The mug is also available for pre-ordering at Emma Bridgewater.

The company has also created Prince George Crown in the same motif. For many the most anticipated piece in the collection was the blue wrap dress modeled after Kate’s engagement dress. Unfortunately there was a bit of a hiccup, the dress color was mislabeled. The good folks at Racked put an image from the Lookbook next to the product listing on BR’s site, where the color was originally listed as “tulum turquoise”. You can understand the confusion; comments on the company’s Facebook page reflected customers’ consternation, here is a small sampling:

Several WKW friends tried on and/or purchased the dress, they were kind enough to share some of their photos with us. Below we see Jessica Reinis of CNN in the dress, she tried on the frock at the Lincoln Center store. The dress is not silk like the original Issa, at $130 I wouldn’t expect it to be. It is a blend of 50% Rayon, 28% Lyocell, 19% Cotton, 5% Spandex. Below, WKW Facebook friend Veronica Aliaga in the frock. As of this writing it appears the blue “Three-Quarter Sleeve Wrap-Tie Dress” (as the dress is named) is sold out online. The availability online and in-store is better for the Merlot version. ‘The Lady and the Rose’ on Twitter tried on the dress in both the blue and merlot, posting these photos on twitter. 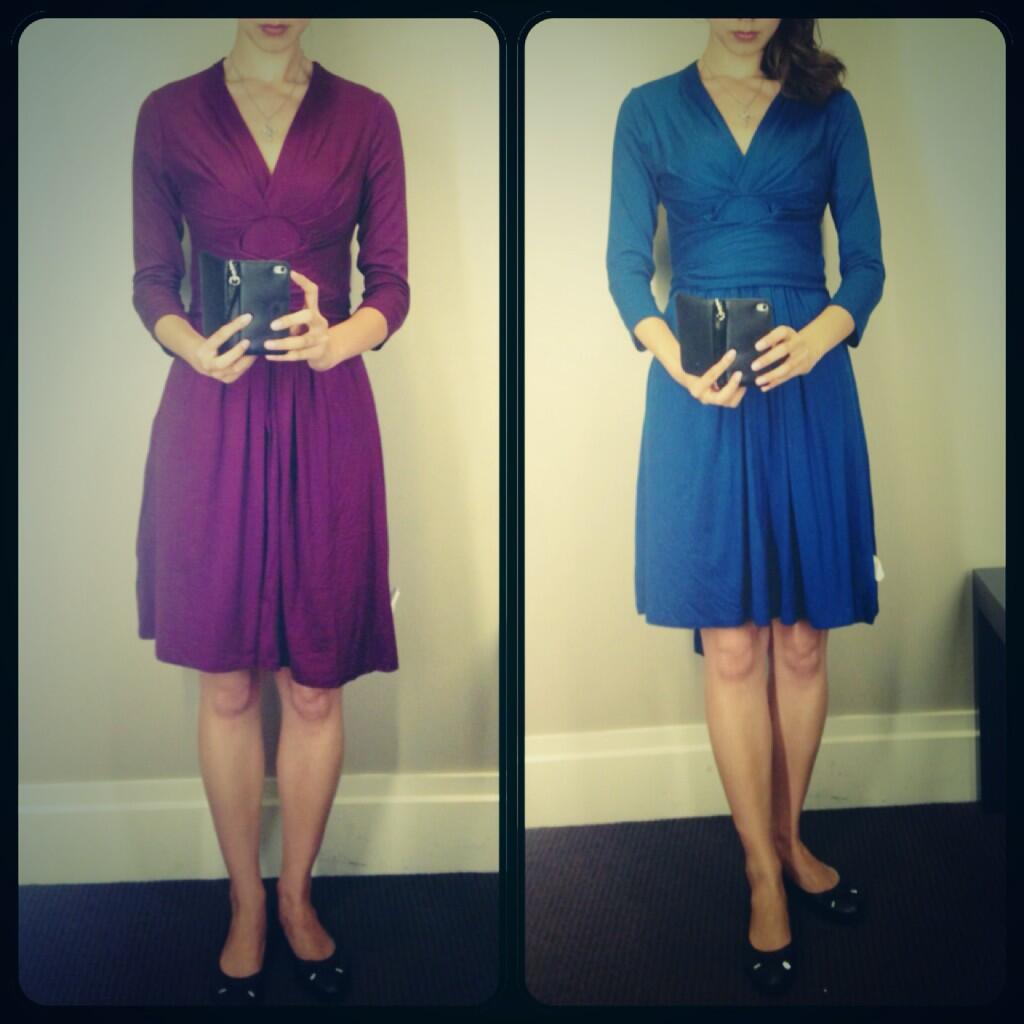 Things that do remain available online include other frocks, like one that is a solid repliKate for the black dress Kate wore shopping just days before her wedding. The original style remains available at the Issa London site, we show it below. Accessories also seem to be in healthy supply.

Good luck to all those hunting for pieces from the Banana Republic/Issa collaboration. (To see why I don’t believe we will ever see Kate wearing Issa again, click here.)

We have very big news about our Baby Cambridge Fundraiser. And this one calls for a drum roll.

As you can see, we have exceeded our goal!! Thanks to each and every one of you who donated, we are ever-so-excited about the news. The beneficiary of your generosity is EACH (East Anglia’s Children’s Hospices), one of Kate’s patronages. For newer readers, the Fundraiser is a joint effort of five online royal fashion and news bloggers (British Royals, Kate Middleton Style, HRH Duchess Kate, A Petite Princess and yours truly).

There have been a number of giveaways and promotions designed to help draw attention to the Fundraiser since our launch several months ago. Today we have an update on the lucky winner of our most recent giveaway here at WKW; some may recall that particular promotion was sponsored by the fabulous folks at Style Rocks.

Knowing Kate’s affinity for citrine, Style Rocks donated an enormous citrine cocktail ring for the giveaway. Alese T., the winner, was kind enough to share photos of the beautiful ring. How beautiful is it on Alese?! That isn’t the end of our promotional efforts, the Fundraising effort runs through the end of August, we would love to exceed our goal by as much as possible.  Stand by for a remarkable giveaway this week.

We also have an update on our polls asking for your favorite maternity style worn by Kate. I don’t think too many readers will be surprised by the results. With more than 2500 votes, the #1 choice among all of Kate’s maternity styles is the Polka Dot dress by Topshop, shown below when Kate first wore it to the Warner Brothers Studio Tour in late April of 2013. Many thanks to everyone who took part in the voting!

We’ll see you in just a few days with that exciting giveaway we mentioned.

Lili was very right about the blue Issa dress. The Issa blue dress was terrible material I returned it right away however the red print ceramic dress was gorgeous. I absolutely adore it and am keeping it. The material is gorgeous.

I went to my local Banana Republic store the other day and I have to agree with some other reviews. I think the quality of the material used to make a version of the coveted original Issa dress worn for the engagement photo is cheap-felt like a cotton blend to me-not worth the price in my opinion. Also, the dress appears to be a teal blue, less of a cobalt or royal blue color.

For what its worth, I did feel that the version of the short sleeved dress the duchess was photographed in when she went shopping felt like a much nicer, thicker, more expensive material. That might be worth a shot.

That ring is gorgeous!

I was so excited about the Issa for Banana Republic collection...then I actually went to my local store and saw the dresses... The material is cheap and not worth $130. The dresses could have been better looking in a different fabric. It is a super casual fabric for the price. I have bought many "Copy Kate" dresses, but they have been less expensive than this one and much more expensive LOOKING. On a positive note: The mugs and souvenirs of George's birth are really cute!!!

What's the best way to send you a photo? I don't see the email/contact link anymore.

The bets email is Susan@WhatKateWore.com. Thanks! :)