We have some tour updates and a possible new engagement on the agenda for the Duchess. We begin with that second topic; below, our Kate’s Calendar entry: We move now to Kate’s tour wardrobe. We can expect some surprises, some pieces we have seen before and an elegant party frock. Most, if not all ensembles will display an element of sartorial diplomacy, something the Duchess is quite skilled at. Do I think we’ll see Kate in a sari? No. But I do think we’ll see designers with a connection to India and perhaps Bhutan as well? Yes, very much so.

One of the biggest factors impacting wardrobe selections: the weather. Following is the forecast for the tour locations, beginning with Mumbai on Sunday. Even taking into account minor shifts in the jetstream resulting in slightly altered temps, it’s clear there will be significantly different weather conditions for almost every leg of the tour. From a sunny 100℉ in New Delhi to 50℉ and rainy in Bhutan is quite a variance. But Kate and her staff will have considered all contingencies while assembling her working wardrobe. Attention to detail while planning precisely what to wear on the tour is explained in this Telegraph story:

A small team have made a rehearsal trip to India and Bhutan, on which Kate’s private secretary Rebecca Deacon made notes on factors to consider about the locations the Duchess will visit, so that she has an idea of what outfits will and won’t work.

On previous trips it’s been clear that specific locations were selected to provide maximum visual benefit. Consider the dramatic image of Kate and William on the steps of the Sydney Opera House in 2014. Kate’s yellow Roksanda Ilincic dress stood out against the backdrop. As the couple walked down the steps toward the cameras the effect became even stronger. Another good example is seen in this shot at Echo Point in Australia’s Blue Mountains. The location is ideal as a backdrop and Kate’s ikat print dress by Diane von Furstenberg coordinated well with the scenic view. We can look forward to equally visual backdrops on this trip. An obvious place ideal for this is the Taj Mahal, but we’ll see many other stunning vistas.

In terms of how many outfits we’ll see, one way to guesstimate is to look at the number of engagements and keep an eye on how many times in the course of a day Kate is likely to change clothes. The Telegraph story mentioned above says that number is somewhere between 12 to 15 outfits.  In terms of specific designers Kate will wear, several names on the British front are likely: Alexander McQueen, Jenny Packham, Temperley London, Erdem, Russell and Bromley and LK Bennett were all seen on the 2011, 2012 and 2014 tours. Among the non-British brands included in that tour trifecta: Jimmy Choo and Diane von Furstenberg.

Today we glance at pieces from a few of the UK-based brands. Erdem’s spring and summer collection offer a number of pieces that have a ‘Kate look’: left to right we show the Yasmini Silk Voile High-Neck Dress, Brooke Dress, the Maddox Striped Organza Dress (with a touch of the Reiss Peacock dress feeling), and the Anne Cotton Blend Lace. The fact most of the styles are sleeveless won’t be a deterrent to the Duchess if she is fond of a style, Erdem has previously modified off-the-rack pieces for her. Below left we show Kate in a customized piece worn in Singapore in 2012, on the right you see the sleeveless version of that dress. Three other Erdem designs: the Kuni Dress in a delicate floral stripe, the Fabrizia Floral-Cloqué Dress in blue and the Devika Silk Print Dress. 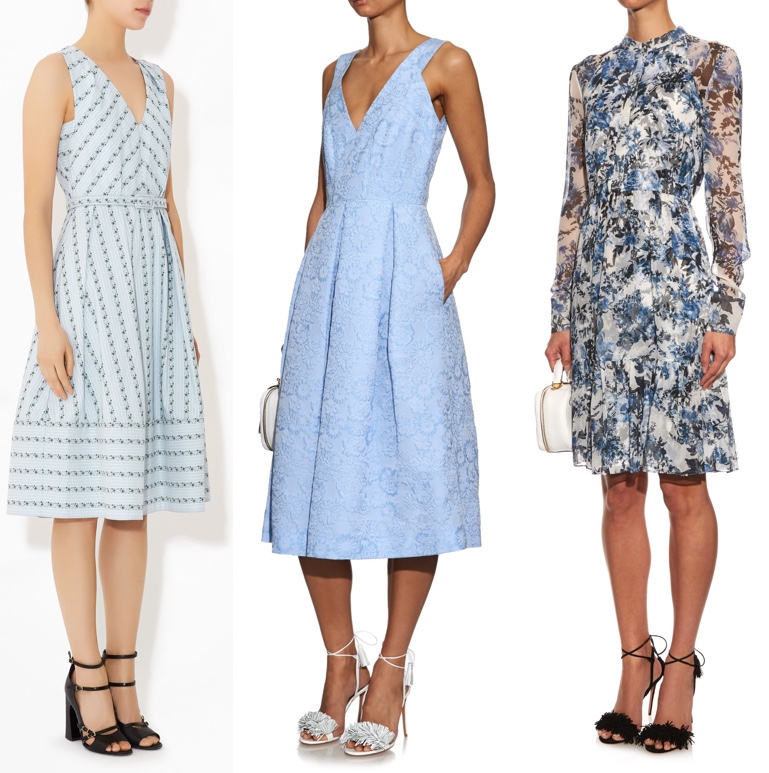 This spring Alexander McQueen has a sizable collection of knits, variations on the blue piece seen above; there are little peplum cardigans, dresses, tops and skirts offered in a pastel palette of yellow and minty green, pale pink and the soft blue seen here. But the McQueen outfit that immediately comes to mind when thinking about India’s hot temps is the bespoke broderie anglaise separates, that look was ideal for Singapore’s heat and humidity during the Jubilee tour. © The UK in Singapore

Temperley London is perhaps uniquely positioned for this tour because of its history with lotus flower prints. The lotus is India’s national flower and Temperley has offered a variety of items showcasing that motif over the years. Below you see Kate wearing the brand’s Lotus Leopard Scarf at the end of the 2012 tour. Chatting with Kate Johnson and Lucy Windsor on the WKW Facebook page I was reminded of the Eliah Flower Show Dress (thank you Kate!), along with the Toledo dresses, both embellished with a lotus flower design. All Photos via Lyst.com

This spring Temperley has some fresh, crisp cotton pieces that look ideal for warmer climes. They’re all part of the designer’s Gilda group; we show (l to r) the the Gilda Skirt and Gilda Crop Top in white; the Long Gilda Dress in blue, and the shorter Gilda Dress in white. Several pieces are also offered in a crisp, sunny yellow.

A closer look at the embroidery. This sort of look seems a good fit for some of the more casual Indian engagements, it has the feel of those McQueen broderie anglaise separates.

Other Temperley options include the Kiri Mae Pleated Dress, it would require a longer lining (although at 100% polyester I’m not sure how comfortable it would be); a variation of the Magda Short Dress shown in the center could work; if the lightweight White Holzer Dress on the right had a proper lining it might be suitable, although it seems quite long, even with Kate’s height. When considering dressier pieces I wouldn’t be surprised to see Kate wearing a variation of the V-Neck Kapena Silk Dress at some point, in either the white seen on the left, or the shell and gold on the right; in the center we show the Stefania Knee-Length Dress in white and blue. One consideration I neglected to initially mention: the symbolism of the color white. In Hinduism white can represent purity but it is most closely associated with mourning. Bhutan is a Buddhist country, where white connotes knowledge and longevity, as well as purity. It is unlikely to be the dominant color in Kate’s ensembles for the Indian portions of the tour. Many thanks to Mackie for commenting and reminding me of this!

Colors we can expect to see used as design elements include the saffron and green of India’s flag, as well as the yellow and orange of Bhutan’s flag.

We share a few Jenny Packham looks only to highlight an approximation of those colors, not to suggest the frocks precisely represent the flag colors or that we’ll any of these styles on the tour. The only formal event is Sunday night’s red carpet gala; at Tuesday’s birthday party for the Queen attire may be a cocktail dress. We’ve not heard details on the expected dress for Thursday’s private dinner with the King and Queen of Bhutan.

It’s possible we could see India’s national bird, the peacock, used within a garment or accessory design, and/or the raven, Bhutan’s national bird. We will cover additional British retailers we weren’t able to get to (Beulah London, LK Bennett) in a Thursday or Friday post.

Our thanks to Pascale and StyleRocks for sponsoring another wonderful giveaway.

We’ll see you Wednesday for coverage of the pre-tour reception William and Kate are attending.