The pageant was held on the private grounds of Windsor Castle and broadcast live on ITV.  Below, the Queen and Duke of Edinburgh arriving. Below, a portion of the program for this evening, shared by Sue Courter. This is part of the letter Prince Charles wrote for the program.

It could not be more fitting that a quite different group that also enjoys The Queen’s unfailing interest and support – horse, of myriad breeds and colour – will join the 600 soldiers, sailors airmen and women who make up this evening’s celebration. The show getting underway. The Pipes and Drums of the Royal Scots Dragoon Guards. The event showcased multiple military units and 900+ horses. More from The Telegraph:

The numbers involved in looking after 900 horses from around the world look like this: There are 1,160 horses stabled on site (for the birthday celebration and the Royal Windsor Horse Show) that have needed 3,000 bales of hay this week, 600 bags of hard feed, 4,400 bales of shavings, with 600 loos, 80 showers and a village shop for their riders. Below, a montage of images showing the Band of the Household Cavalry and the Irish Guards Band performing. Tonight’s celebration “told the story of Her Majesty The Queen’s remarkable life from her birth in 1926, through World War II to the Queen’s Coronation in 1953, continuing with her reign right up to the present day.” Acting as emcees, comedy duo Ant and Dec (Anthony McPartlin and Declan Donnelly) helped segue through the various elements in the Queen’s life covered in tonight’s program. More from The Daily Mail:

Famous actors narrated the historic moments from the Queen’s life starting with Downton Abbey star Jim Carter who covered the monarch’s childhood years and introduced his wife Imelda Staunton who performed a song.

Dame Helen took the audience through the monarch’s war years and how the nation fought against Nazi tyranny.

The guest of honor seemed to enjoy herself immensely.

What a show. No room for error from the @HCMRegt!#HMQ90pic.twitter.com/M9dOVXOv2V

Jaguars zipping about the arena. Princes Philip, William, and Harry were all wearing their Windsor Uniforms tonight, worn only at Windsor Castle. The uniform is marked by its distinctive red cuffs and lapels. The Duchess was in a Zara jacket, the retailer’s Blazer with Back Pleat ($99). The piece is a poly/rayon blend with a touch of elastene for stretch. It features raglan sleeves, a back pleat adding extra volume (akin to what we used to call a swing coat), front pockets, oversized buttons, and what Zara refers to as a Peter Pan collar. Our thanks to Morel Melany for sharing the jacket ID on Twitter. 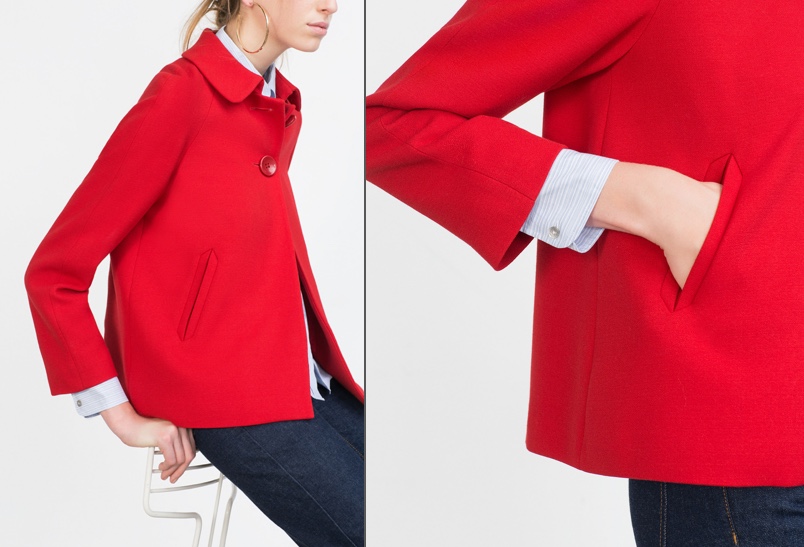 The Duchess was in another lace dress, it appears to be another one by Dolce and Gabbana, the brand’s Cotton Blend Lace Dress ($5995). It is a departure from the other Dolce and Gabbana lace dresses we have seen the Duchess wear, those have been sheaths. Today’s skirt has a bit of a boho feel, almost a 70’s peasant-style dress. The frock is described this way on the Net-a-Porter site:

Dolce & Gabbana’s white dress is a romantic choice for special events or brides. This exquisite design is crafted from pretty cotton-blend lace with sheer sleeves, a nipped-in waist and tiered, swishy skirt. It comes with a smooth satin slip for coverage.

Our thanks for this identification to Pinball Wizard, also on Twitter. The jacket and dress do not seem like items well suited to be worn together; several friends at the event suggest perhaps Kate added the jacket at the last minute, realizing it was chillier than anticipated.

UPDATE MAY 16: The Duchess also carried a black clutch and shawl/wrap/scarf. The bag looks like the Prada clutch in black satin (£940) we first saw Kate carry in India.

Fittingly, Kate’s earrings are a pair loaned to her by the Queen. We have seen them on several occasions. They were first worn to the 2011 BAFTA dinner in Los Angeles (center), as well as to the 2013 and 2015 diplomatic receptions at Buckingham Palace.

We leave you with this previously unseen photograph, used in a video portion of tonight’s presentation. It shows Princesses Elizabeth and Margaret with their father, King George VI.

HM The Queen via The Telegraph

We will see you tomorrow for the Heads Together launch at Queen Elizabeth Olympic Park with Kate, William and Harry.