Kate brought back a much-loved gown for tonight’s Taste of Norfolk, a gala dinner in support of EACH. Many readers will recognize the frock as the Jenny Packham design first worn to a 2011 dinner benefiting ARK (Absolute Return for Kids).  Below, Kate in the gown tonight.

Kate has been patron of East Anglian Children’s Hospices since January 2012. More about the charity from The Daily Mail: The function was held at Houghton Hall, not far from Anmer Hall, Kate and William’s country home. The evening was hosted by the Marquess and Marchioness of Cholmondeley, David and Rose Cholmondeley. It is a stunning setting for any event, especially something like this evening’s dinner. Below, a file photo taken at dusk.

Readers will remember Kate was at Houghton Hall in early June when she took Charlotte and George to the Houghton Hall Horse Trials. More about this evening’s festivities from Richard Palmer’s story for The Express.

With a special five course meal prepared by five Michelin – starred chefs, the Duke of Cambridge knew his luck was in at the dinner at Houghton Hall, three and a half miles from the couple ‘s 10-bexroom country mansion at Anmer Hall on the Queen’s Sandringham estate.

“William has to put up with my cooking most of the time,” Kate, 34, told the chefs. “It’s the reason I’m so skinny,” said William. The evening included a champagne reception, the special dinner, music, and a performance by the EACH Treehouse Choir.

Tonight’s function benefits The Nook Appeal; an EACH effort to raise funds for a new children’s hospice in Norfolk called The Nook. Fundraising for the new hospice started in November of 2014 (our post on that event is here). The budget for the new hospice is £10 million; thus far, EACH has donations and pledges totaling £2.5 million. The new hospice would provide more overnight accommodations, more private family support areas, and treatments such as hydrotherapy.

Kate’s gown was first worn to the ARK Dinner in June 2011.  Below, Kate at the ARK function and the dress as it appeared on the runway. The June 2011 dinner was an important engagement: it was the first formal event Kate and William attended after their April wedding, and William delivered the evening’s keynote address. Here is how the dress was described on the Jenny Packham Facebook page in 2011:

Below, tight shots from 2011 showing the fabric used for the gown. I had forgotten how beautiful it was, shining and shimmering as it moved, the light reflecting off the crystals and sequins.

One store offering the gown was My Theresa. Below, the retailer’s design notes on the dress: You can see the back of the dress in this photo from Richard Palmer. A closer look at the bodice this evening and five years ago. And she wore the LK Bennett Agata sandals seen at the ARK dinner. Below left, you see the shoe as worn in 2011, and below right, the sandal this evening.

LK Bennett has reissued the shoe, although there are distinctions between the two designs. The new style is leather, as opposed to suede; the heel is lower, and the bow is wider.

Kate wore the diamond chandelier style earrings loaned to her by the Queen. 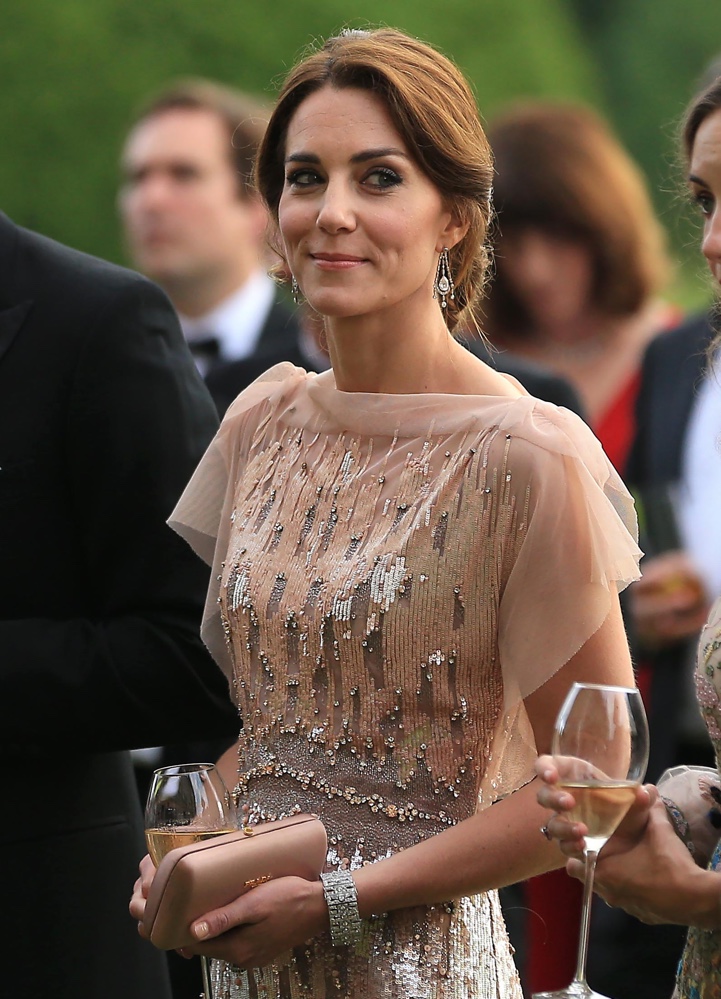 We have seen the earrings on multiple occasions, including the China State Dinner in October.

We also saw tonight’s bracelet at the state dinner. It is originally thought to have been a choker-style necklace worn by Queen Mary (seen below) before it was converted to a bracelet. When asked to list their top 5 choices from the many gowns Kate has worn this dress is on almost everyone’s list. Once again, we can see why this is the case: the cut and color, the touches of tulle combined with the lavish embellishment result in an ultra-elegant design that is very flattering on the Duchess. We also have an update to Kate’s Calendar.

We’ll see you Friday when we’ll be seeking your input on the jewelry Kate wore in the recent flurry of engagements. In the meantime, be sure and vote for your favorite pieces here if you haven’t already done so.