The Duchess brought back her Missoni coat for today’s Service of Hope at Westminster Abbey. The service follows the terror attack in Westminster two weeks ago when five people were killed (including the terrorist) and scores injured. Some of the flowers left at the Abbey since the attack. Prior to the service, the Dean of Westminster the Very Rev John Hall told the BBC the attack was “senseless” and said the service will be one of hope to bring communities together. Below, Melissa Cochran arriving for the service. She is from Utah; her husband Kurt was killed in the attack. The couple was in London celebrating their 25th wedding anniversary. Ms. Hall is recovering from multiple physical injuries, including a shattered leg. Kate being greeted by officials; I believe she is speaking with Metropolitan Police Acting Chief Craig Mackey. From the Daily Mirror:

Witnesses and hundreds of brave emergency services members involved in the response effort are among 1,800 people attending the service, just yards from where the deadly attack unfolded.

William delivered the second reading, the Parable of the Good Samaritan (Luke 10:29 – 37). Also at the service was more than 400 police officers, firefighters and medics and several faith leaders.

Two hundred diplomatic representatives from across the world also attended. Between prayers and hymns the royals led a candlelight tribute to the victims as each of the 1,800 people in the congregation lit a candle and then recited the Lord’s Prayer.

Following the service, the trio met with some of those in attendance. The Abbey is just minutes away from the site of the attack. As you can see in the photos, it was a bright, sunlit day in London. We make the shift now to what Kate wore for today’s service, a very tough turn when writing about a service like today’s. (But I also believe it is okay to talk about something that brightens one’s day.) Kate was in the Missoni Long Snake Stitch Coat, a piece that is no longer available; below you see it as it was shown on the Nordstrom website.  The fabric is what makes the coat distinctive, a textured zig-zag, or snake stitch, in black, gray, and white. The coat was first worn for the Battle of the Somme 100th Anniversary ceremonies in June of last year. This is from that June 2016 post:

The fabric is a blend of 50% rayon, 32% rayon cupro and 18% polyester.  The coat has an A-line silhouette; it is single breasted with oversize patch pockets, and a back vent. You can just glimpse the black dress (or possibly a skirt, but I would bet on a dress) beneath the coat. If I can find a better photo of it, I will add it to the post.

The Duchess carried a new handbag. It appears to be a style that is from the Beulah London – Aspinal of London collaboration.

The two luxury labels collaborated on a line in 2015; we featured the designs in a July 2015 post. (Which I had to be reminded of, thank you to Lisa for her Facebook post identifying the bag.)

25% of the profits from each handbag sold were donated to the UN’s Blue Heart Campaign Against Human Trafficking. Some readers will recognize the distinctive Beulah Blue Hearts motif. More about the symbol from Beulah London:

The handbags measure 4.5″ x 8.5″ x 1″, have one inside zippered pocket and an easily removable lightweight chain.

Only 50 handbags were made in each style. According to the Beulah website, they have two of the black style in stock. The Cobalt Blue version of the bag is available at Orchard Mile ($485) and also at Aspinal of London. Kate wore the Sylvia Fletcher for Lock & Co. hat, a variation on the ‘Salsa’ style shown in hot pink.

We saw the Gianvito Rossi black suede heels at this afternoon’s service. The Signature Pumps are a point-toe style with a 4″ heel. They are available in most sizes at Forward; in most sizes at My Theresa;

Many recognized the Sylvia Fletcher for Lock and Co. hat as soon as they saw it.

Kate’s earrings are a pair we’ve seen before, loaned to her by The Queen.

A closer look at her updo. 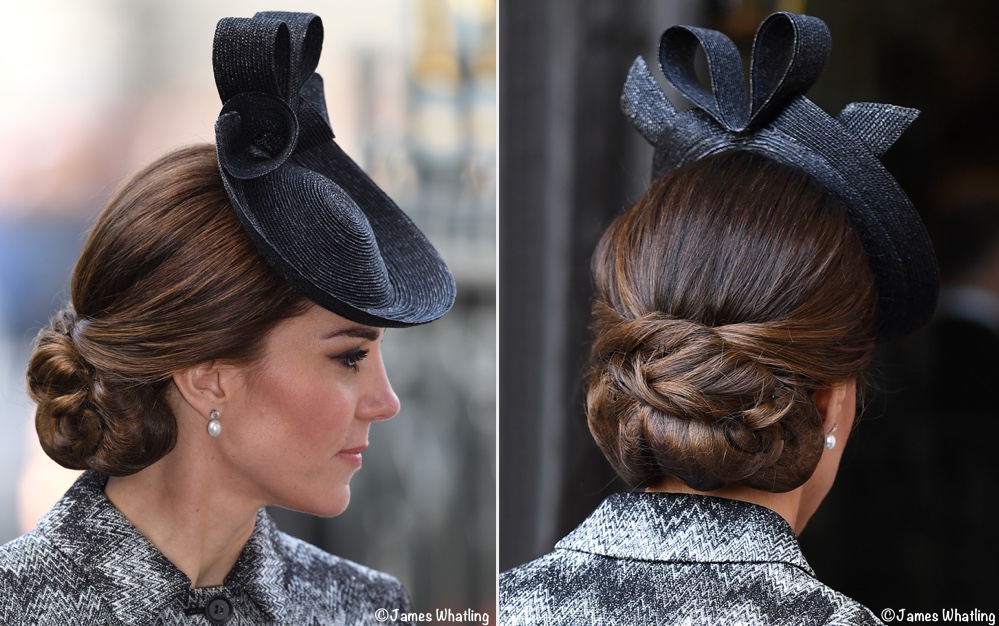 Kate looked lovely. Hat, shoes, clutch, pearl earrings, sheer dark hose-- all perfect. I personally steer clear of anything resembling "snakeskin," so this coat was not a favorite for me. However, I understand that she can't wear plaids/brocades/solids all the time, and the colors were entirely appropriate for such a sad occasion. Sending thoughts and prayers for the victims and their families as well.

Thank you for the link to the Order of Service, which I found quite moving.

I was wondering whether Kate might wear something dark and somber to this event, or perhaps something pastel or light (being a service of "hope"). In the end, she definitely got it right.