The Duchess Wears Gucci at the V&A, and Kate in a New BBC Documentary

Kate chose a Gucci dress with a retro feel for today’s engagement at the Victoria and Albert Museum. The occasion was the formal dedication of the V&A’s new Exhibition Road Quarter, the biggest architectural project the Museum has undertaken in 100 years. More from the V&A:

Providing a new entrance, courtyard and purpose-built gallery for temporary exhibitions, the Exhibition Road Quarter will showcase the best of contemporary design, as well as celebrating the beauty of the V&A’s existing building. This video of Kate’s departure from Rebecca English of The Daily Mail offers a look at the courtyard.

Video: the Duchess of Cambridge leaves the V&A pic.twitter.com/9mHNx2nSVJ

From a CNN story:

One of the year’s most anticipated architectural endeavors, the Exhibition Road Quarter designed by Amanda Levete and her practice, AL_A, opens today at the Victoria and Albert Museum in London.

Below, 6-year-old Lydia Hunt presents Kate with a bouquet; Lydia’s father, Tristram Hunt, is the director of the V&A. The Duchess greeting guests and dignitaries at the event. One of the design elements I love is seen in this picture shared by the always-awesome Gemma of Food Fash & Fit. We have more from her post on today’s events:

More difficult to capture with my camera was the reimagining of the Aston Webb Screen, which originally hid this area from public view on Exhibition Road, and separated the museum from its nearest neighbours, the Geological Museum, Natural History Museum and Science Museum.

The photo above is from 1981. Below, Kate in front of the new screen. And a wide shot as seen in a video by Amanda Levete Architects.

Originally a shrapnel-pocked brick wall with a gate topped with the royal crest, the screen has been transformed into a see-through metal mesh that uses perforations to recall the original WWII damage, maintaining a link to one of the most important events in London’s history.

Gemma also shared a picture of the inscribed stone adjacent to the screen that is seen above left in the video screen grab. Kate in the Sainsbury Gallery, an enormous new space at the Museum. The Duchess unveils a commemorative marker from today’s ceremonies. A closer look, with thanks once again to Gemma of Food, Fash, Fit for sharing her photos with us. Here is a 35-second time lapse of the project.

Our V&A Exhibition Road Quarter project is our biggest transformation in 100 years!#RevealVAMhttps://t.co/Xmm2XAXpOcpic.twitter.com/T9EQqT6Y4I The frock is from Gucci’s pre-fall collection, constructed in a black and white cotton/nylon tweed that showcases the brand’s signature  petersham ribbon (also referred to as web) in blue and red.  NOTE: Net-a-Porter refers to the dress as “Grosgrain Ribbon Trimmed,” but as Sarah and Bonnie point out in their comments, it is trimmed with petersham ribbon. To see a photo that shows the difference between the two, visit A Fashionable Stitch. The tailored design has a round neck, short sleeves, and a concealed back zipper. From Bethan Holt’s Daily Telegraph story:

With its abbreviated length, tweed fabric and neat button and pocket detailling, the shift dress recalls the elegant look which Jackie Kennedy made her own in the early 1960s when she often wore pieces inspired by Coco Chanel’s designs. That connection makes sense for Kate who has often nodded to Kennedy’s style codes in her wardrobe choices, from her houndstooth skirt suit by Eponine London to her penchant for chic pillbox hats.

Here is a good look at the nubby tweed fabric, as well as the navy and red petersham trim. The dress is available at Net-a-Porter ($2980) in very limited sizing, but in stock on the Gucci UK site in most sizes (£1790). (If you are in the US the link is likely to redirect you to the US site, you will need to click “Ship to the UK” in the far upper left of the site.) There is a distinction between the dress Kate wears and the style available through Gucci; the brand’s version has a split sleeve on the back (shown lower left), with the ribbon topped by buttons. Kate’s dress does not have the additional embellishment. Our thanks to Evangelina on Twitter for her speedy ID of the dress, as well as Mary Noël and Mary Ann. Some might not be aware “The V&A holds the national collection of fashion, one of the largest and most comprehensive collections of dress in the world.” (That is from a V&A tweet today.) The Museum shared thoughts on Twitter about Kate’s look, linking to a 1966 mini dress by André Courrèges.

The Gucci dress worn today by the Duchess of Cambridge demonstrates the continuing influence of 1960s style on contemporary fashion. This dress by André Courrèges epitomises the clean lines & straight cut of the period, in display in Gallery 40. The Museum also noted that “In 2015, we acquired a pair of L.K. Bennett nude ‘Sledge’ court shoes, a preferred style of the Duchess of Cambridge.” A red version of the dress was seen in Gucci’s pre-fall collection photos. The red version is done in a wool/silk blend that is available at Net-a-Porter ($2700) without the sleeves embellishment. It is offered at Saks with the embellishment. We also show the frock in black wool and silk, offered at Farfetch ($2700).

The Duchess wore her ‘Art’ navy pumps by LK Bennett.

We initially saw the heels at Kate and William’s final public engagement before their wedding, a visit to Darwen Academy. 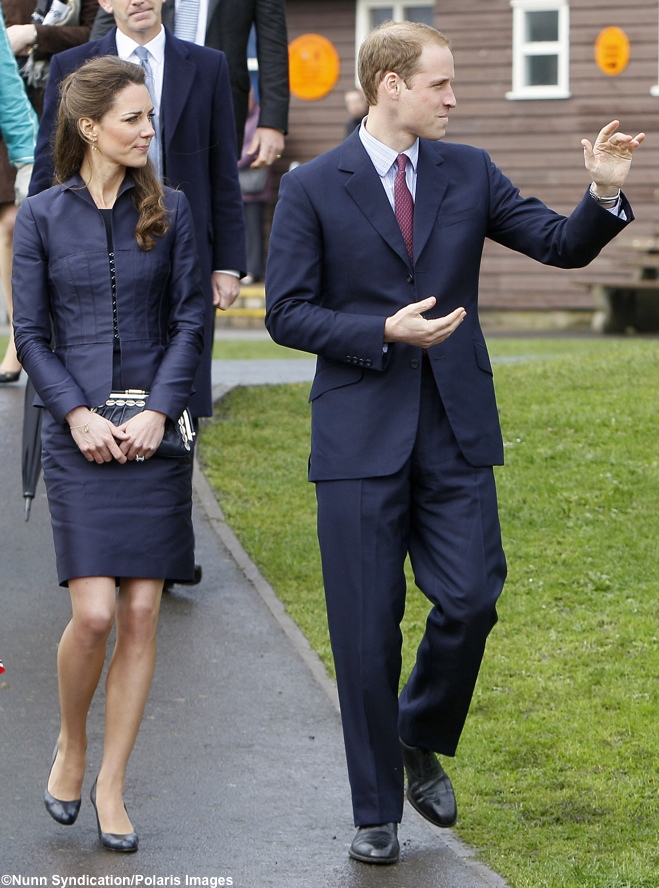 Kate carried a new (to us) red handbag. It looks like the bag could be a custom version of Emmy London’s Natasha bag, minus the gold piping. Kate owns the Natasha in several colors; it could well be this style. Tiffany C. messaged to say she has three Natasha bags and she believes it is the Natasha; also, Middleton Maven says Emmy London verified Kate carried their bag.

Kate’s hair was in a partial updo. Two engagements have been added to Kate’s Calendar since our last post. One is a July 13 visit to the Natural History Museum; we have details here.

The other is at Wimbledon on Monday.   In her role as the new royal patron of the AELTC Kate will attend a match at Wimbledon. Previously, the Queen was the organization’s patron; HM started serving in that capacity in 1952 and turned over the patronage late last year. Below, the Duke and Duchess at Centre Court last July. Kate will meet ball boys and girls before the match, as well as stewards, along with medical and safety personnel. Monday is the first day of play, with first round matches for Gentlemen’s Singles and Ladies’ Singles. The matches begin at 1 pm local time, that’s 8 am EDT/5 am PDT. Here is a 1-minute Wimbledon video.

Kate has a sizable role in a new BBC documentary about the network’s Wimbledon coverage: “Wimbledon and the BBC 1927-2017.“

From The Daily Mirror’s story about the special program:

“I was really taken by Agassi and Sampras, Ivanisevic and Steffi Graf. Those are my first memories. Roger [Federer] is my mother’s heartthrob. I don’t think she will mind me saying that! I think he probably knows that too.”

Kate also said she queued for hours to get into the tournament before joining the Royal Family, adding: “Being able to go into Wimbledon and be part of an amazing atmosphere is special.”

Many readers will recognize what Kate is wearing, the jacket and skirt by Armani Collezioni first seen in April of this year. The Duchess is also wearing her Mirabelle Lolita earrings. Kate reveals in the program she wanted to be a tennis star. Back to The Mirror’s story:

Kate, talking in a BBC documentary to mark 90 years of coverage, also said she wanted to be a tennis star.

She said: “It inspires young people including myself. Every time Wimbledon is on I am thinking ‘Yes, I could do the same’ and get out the racket. Sadly, not the same results.” This Saturday Prince William, Prince Harry and Kate will attend a service of rededication of the grave of Diana, Princess of Wales. Princess Charlotte and Prince George will accompany their parents to the private family ceremony.  This will be at Diana’s gravesite at Althorp House, the Spencer family estate. More from The Telegraph:

Kensington Palace said in a brief statement: “The service, which will fall on what would have been the Princess’s birthday, will be conducted by The Archbishop of Canterbury and attended by her family.” And from The Evening Standard:

William, Kate and Harry’s visit to Diana’s grave will be a totally private event. There will be no media facility for this service.

The royals thanked the media in advance for understanding the family’s need for privacy for this event.

This summer there is a special exhibit at Althrop, “Diana: Walking in Her Shoes.”  The exhibit is done in tandem with The Diana Award, “the charity set up in memory of Diana, Princess of Wales’s belief that young people have the power to change the world for the better.  It is committed to fostering and developing change through practical action with young people.” The exhibit showcases the work done by 20 recipients of the Diana Award’s ‘Legacy.’