Kate in Catherine Walker and a New Brooch for Battle Anniversary

The Duchess wore a new Catherine Walker coatdress for today’s commemoration of the 100th anniversary of the Battle of Passchendaele in Ypres, Belgium. UK Prime Minister Theresa May greets Kate as dignitaries gather for the memorial. Prince Charles arrives for the service of remembrance. The Prince of Wales and Queen Mathilde. The battle started 100 years ago today; ceremonies were at Tyne Cot Cemetery. It is the largest of all Commonwealth cemeteries in the world in terms of burials.

There are 11,961 Commonwealth servicemen buried there, of whom more than 8,300 remain unidentified. The site also contains the Tyne Cot Memorial, which commemorates nearly 35,000 servicemen from the United Kingdom and New Zealand who died on the Ypres Salient after 16 August 1917 and whose graves are not known.

Military units taking part in the service included the Band of HM Royal Marines Plymouth, Band of the Welsh Guards and Central Band of the Royal Air Force. A headstone marks the grave of an unknown Canadian soldier. From The Daily Telegraph:

Exactly 100 years after thousands of British and Commonwealth troops went “over the top”, Charles, the Duke and Duchess of Cambridge and Prime Minister Theresa May joined the King and Queen of Belgium and some 4,000 descendants of those who fought, for a ceremony at the enormous Tyne Cot cemetery near Ypres. Awaiting the start of the service. In his address to the gathering, the Prince said: “We remember it not only for the rain that fell, the mud that weighed down the living and swallowed the dead, but also for the courage and bravery of the men who fought here.” From the War Graves Commission:

Welsh poet Hedd Wyn and Irish poet Francis Ledwidge, who were both killed in action on the first day of Passchendaele, were honoured during the commemorations Kate is given a bouquet to place graveside. Prince Charles and Sir Timothy Laurence receiving the wreaths they will place at the memorial. The service concluded with a fly-past of Belgian F-16s in a missing man formation. A video of the flyover.

King Philippe, the Duchess, Queen Mathilde, Prince William, and you can just see Theresa May in the lower right corner as they watch the jets. Before the service, Kate and William visited with interns from the War Graves Commission. The interns play a vital role in helping visitors learn about the cemetery and the stories of those buried there. Kate and William toured parts of the cemetery. Here you see them accompanied by Victoria Wallace, Director General of the Commonwealth War Graves Commission.

The Duke and Duchess of Cambridge are visiting Bedford House, the final resting place of more than 5,000 Servicemen of WWI. pic.twitter.com/IYdaknJQbL — Kensington Palace (@KensingtonRoyal) July 31, 2017

Now to what Kate wore for today’s commemoration. She was in Catherine Walker’s Melrose coatdress. 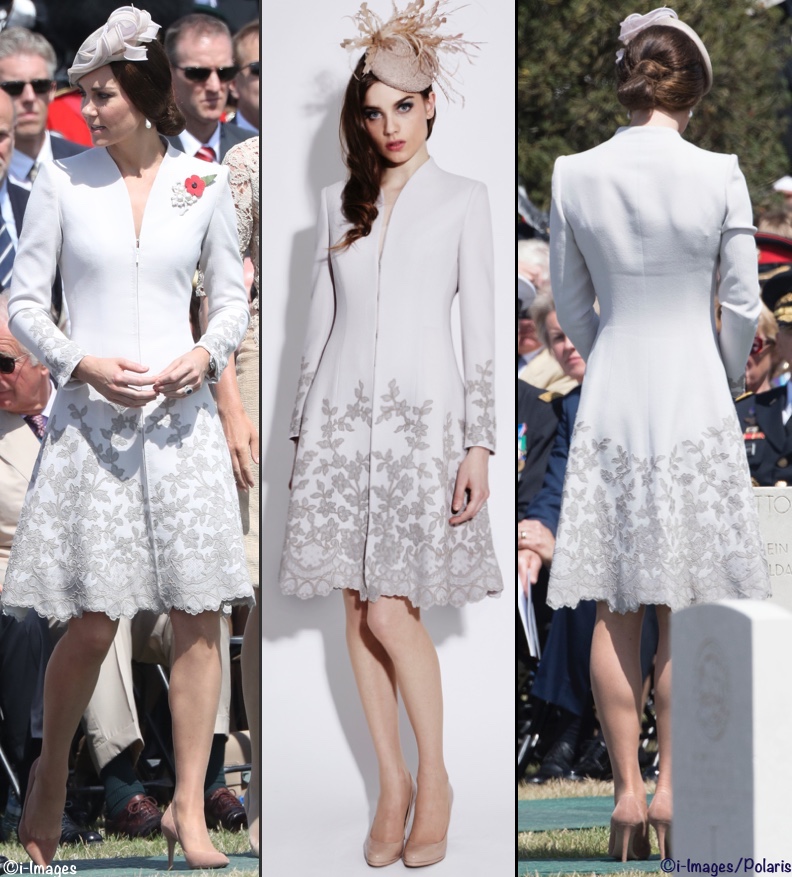 The garment is described as being made of dusty pink Venetian wool, a lightweight higher-end fabric. It is decorated at the hem and cuff with hand appliqued taupe lace.

Kate wore a new hat for today’s ceremony. It has the look of a Jane Taylor design, but we’ve not yet found a specific style it matches or received confirmation from the milliner. We’ll pursue this as soon as we get the post up. UPDATE:  It turns out Kate’s hat was by Jane Taylor, but it’s a style we’ve seen before. The Duchess was wearing the Fleur style first worn in Belgium in 2014. Anna of My Small Obsessions thought it looked familiar, and she was right. Anna received confirmation from the milliner it is the same piece with new embellishment. She also had on a brooch we’ve not seen before; it is another loan from the Queen, featuring multiple leaves with three large mabé pearls.  A Tip of the Tiara to Jelena, who tweeted it was worn by HM on a state visit to South Korea.

More about the piece from Her Majesty’s Jewel Vault:

The Duchess wore Princess Diana’s Collingwood Pearl and Diamond Earrings, so-called because they were a gift from Collingwood Jewelers. The earrings were previously worn to the Spain state dinner in mid-July. They were part of Diana’s private jewelry collection.

Back to the Order of Splendor:

Brooches are not really a regular part of The Duchess of Cambridge’s wardrobe, but her use of the Pearl and Diamond Leaf Brooch – together with the Collingwood Pearl and Diamond Earrings from the collection of the late Diana, Princess of Wales (first worn for the Spanish state banquet) – adds a nice touch of extra formality for a significant remembrance occasion.

Today we saw a new pair of Gianvito Rossi pumps, although they are the same color, praline, as Kate’s frequently worn pair. Originally many of us presumed they were the signature 105 style with its 4″ heel (below left). But HeavenQRF noticed today’s heel height is different from the pair we’re used to seeing; she deserves a Tip of the Tiara as well, for I would never have noticed the disparity in heel height. It looks like Kate wore the brand’s Signature heel in the 3.5″ heel version. We show it at Forward ($675); it is also available in limited sizing at Savannah ($670).

Some may recall that Gianvito Rossi’s point heel suede pump comes in three heel heights: the 4.1″ we often see Kate wear; the 3.5″ style worn today; and the lowest heel, which is 2.75″ – 3″.  Below you see the design in all three heights as offered at My Theresa.

Kate wore her hair up. This 1:30 video shows the Duke and Duchess walking through the cemetery and meeting with the interns.

The Duke and Duchess of Cambridge visit the Tyne Cot Cemetery. #Passchendaele100pic.twitter.com/rFFZmW9TDQ The Duchess’s new private secretary is Catherine Quinn.  Currently, she is Chief Operating Officer and Associate Dean for Administration at the University of Oxford’s Saïd Business School

From a Kensington Palace statement:

“Catherine is a member of the Boards of the Charity Commission for England and Wales, the Met Office, and the Royal British Legion.

“She has an MBA from Oxford University’s Saïd Business School and degrees from US and UK universities.”

And from People magazine:

Quinn is also a member of the Boards of The Charity Commission for England and Wales, The Met Office, The Royal British Legion and The National Memorial Arboretum.

Ms. Quinn will start in her new position in October.

A couple of quick housekeeping notes: