The start of the performance was delayed because of a security concern at the Oxford Circus tube station about an hour before the show was scheduled to begin. The station is very close to the Theatre. It turned out there was no security incident, but as ITV pointed out in its story: “The delay meant that a traditional pre-show lineup for performers to meet the royal party had to be dropped.”

Hannah Furness of The Daily Telegraph shared a video of the Duke and Duchess arriving at London’s famed Palladium Theatre.

The Duke and Duchess of Cambridge arrive for Royal Variety Performance. Nearly an hour delayed by Oxford St incident pic.twitter.com/mU0QOWafHA The event is a fundraiser for the Royal Variety Charity, officially called the Entertainment Artistes Benevolent Fund. The organization helps hundreds of entertainers in the UK every year. The Queen is the charity’s Patron. More on the event’s origins from The Daily Mail:

It became an annual event at the suggestion of George V in 1921, when the King decreed that ‘the monarch or a senior member of the Royal Family, would attend an annual performance, in aid of Brinsworth House and the Royal Variety Charity, once a year thereafter’.

The Duke and Duchess at the Performance in 2014. “God Save the Queen” before the entertainment gets underway. It sounded like tonight’s performance was still enjoyable, despite the delay. More from People magazine.

At the actual performance, Kate was left in giggles as William was forced to join in the show’s audience participation. William had gamely taken part in a comedy skit from host Miranda Hart, obligingly shouting her catch-phrase “such fun” on request.

While the Prince performed his part enthusiastically, Kate burst out laughing as the spotlight fell on them. Laura pointed out on the Facebook page and Twitter the frock’s similarity to a style from the a/w 2017 runway collection (left) and a Jenny Packham Bridal design on the right. The dress has a layer of illusion tulle covered in sequins and crystals in a floral motif. Here you see how the gown plays under different lighting conditions. The floral theme was carried out at the hem.

And a closer look at the crystal/sequin embellishment. These two images show the earrings a little better. Tonight’s ensemble was almost identical to one worn in Paris in March: Kate wore the same earrings, handbag, and shoes. 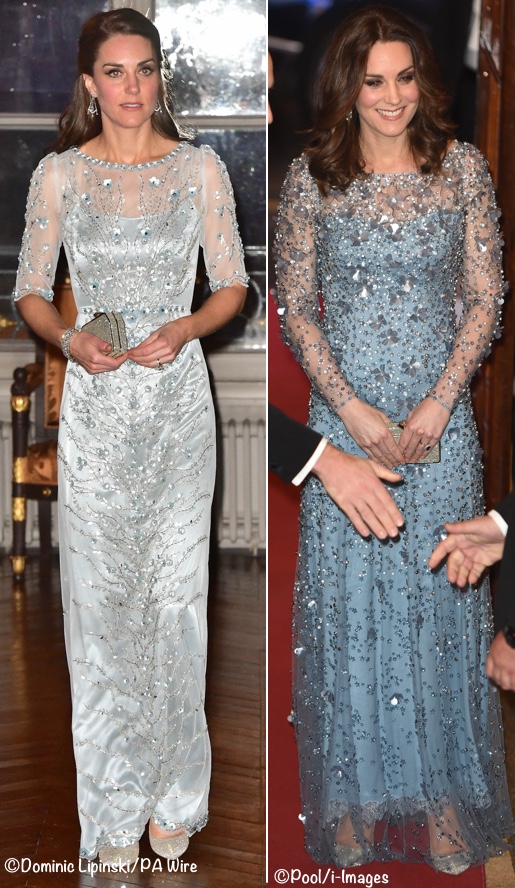 There were many references to Disney’s Elsa the Snow Queen from Frozen. This was an outstanding look for the Duchess. All of the elements worked well together and she looked lovely. We have a couple of repliKates for tonight’s look: below left, the Brianna Embroidered Gown ($133.50), as shown at Dillard’s; in the middle, the Adrianna Papell Ombré Beaded Gown ($195.99 in Black Friday sale) as seen at Macy’s; on the right, Adrianna Papell’s Sequin Gown ($206) as shown at discounter Bluefly. We’ll leave this portion of the post with another video from Hannah Furness, it shows Kate and William onstage after the entertainment concluded.

Late night for Duke and Duchess of Cambridge at Royal Variety, invited on stage to congratulate host Miranda Hart and performers pic.twitter.com/lQFUrjYDor

In case you haven’t seen our post on the best Kate-related Black Friday deals and discounts, here’s a glance at a few of the promotions. We begin with Séraphine Maternity, where almost everything is 20% off; coats are excluded. Our thanks to Middleton Maven for the tip on this one! A sampling of some of the shoe sales underway.

The US Links of London site is discounted 25%; the promotion is 20% off on the UK site, as well as on the Canada site. Absolutely gorgeous dress and Kate looks beautiful. I’m not really a fan of that icy/pale blue colour on her however. She seems to wear that shade a lot.

I think Kate looks absolutely fantastic in this gown, shoes, makeup, hair.........Sitting down in a dress with embellishments is not as bad as people might think. The fabric is complex, so the cut is simple and the fit is perfect. And those shoes and bag work too! I liked the Paris gown better but that's just my personal taste. This was a big hit IMHO!

I hate to say it, but I really dislike this dress. The embellishments are over-the-top, and sadly, the dress seems to be wearing her. However, Kate is a gorgeous woman, and I am glad to see her looking happy and healthy!

I can't think of a thing to add to the existing comments about this dress, so I l'll let those stand, ha! However, on a bit of a side track, the Adrianna Papell repliKate is a very pretty look at a great price - I'd love to see that one in person!