The Duchess wore an Erdem dress to this afternoon’s preview of the Chelsea Flower Show. Emily Andrews of The Sun tweeted a video of the couple as they arrived.

Video:#DuchessOfCambridge in a stunning Erdem dress arrives at Chelsea Flower show with Wills to show the Queen & other royals around her @The_RHS “back to nature” garden #RHSChelsea pic.twitter.com/fPghcMjFMB

It was officially press day at the event, as well as an opportunity for VIPs to see the show. 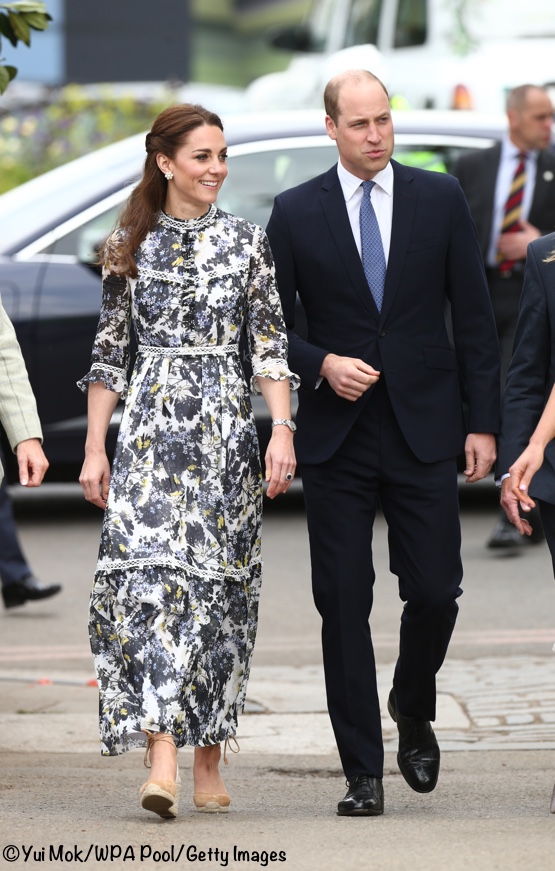 There was a full complement of royals at the show. Below, the Duke and Duchess of Gloucester as they arrived. The Earl and Countess of Wessex. Prince and Princess Michael of Kent, fresh off the wedding of their daughter Lady Gabriella Windsor this weekend. The bride with groom Thomas Kingston at St. George’s Chapel on Saturday. I thought I might do a post on the wedding later this week if people would enjoy that coverage. Prince Andrew was also in attendance. HM visited the Back to Nature garden that was unveiled today. A quick video tweeted by the Royal Family.

Gardening Charity The Royal Horticultural Society was founded in 1804 by Sir Joseph Banks and John Wedgwood and the charity aims to “enrich lives through plants and make the UK a greener place”. pic.twitter.com/CxcZRH9b5E

HM always seem to be smiling when attending this event, I think of it as one of her favorites. Today she was wearing the Stewart Parvin ensemble seen at the wedding of the Duke and Duchess of Sussex last May. (Something I would have missed entirely if Laura hadn’t pointed it out.) The Duke and Duchess greeting HM. ITV’s Lizzie Robinson reports that “Kate included some of the Queen’s childhood memories in her garden including carrots and beetroot which she remembers planting as a girl.” The couple also showed HM pine cones collected by their children for the display. A wide shot of the garden. More from The Telegraph’s piece by Hannah Furness.

As the Duchess waited for the arrival of her grandmother-in-law at her “back to nature” garden on Monday, she was seen nervously tidying up the walkways by picking up stray leaves and twigs and, for want of a better idea, stuffing them into her handbag.

Her last-minute adjustments did not go unappreciated by the Queen, who remarked as she approached the woodland: “It’s very tidy.”

That would explain this shot. More on the Queen’s involvement with the garden via The Telegraph:

All three generations of the family had helped the Duchess with her garden planning, with the Queen sharing her own childhood memories of planting vegetables and hearing a waterfall at Sandringham.

It is thought to be the first time the Queen, who is patron of Chelsea Flower Show and has visited almost every year since her coronation, has contributed so directly to a show garden.

Proclaiming the finished version “lovely”, she expressed surprise that the Duchess and her co-designers had managed to “fit so much in” to the small space which had been created as a woodland. 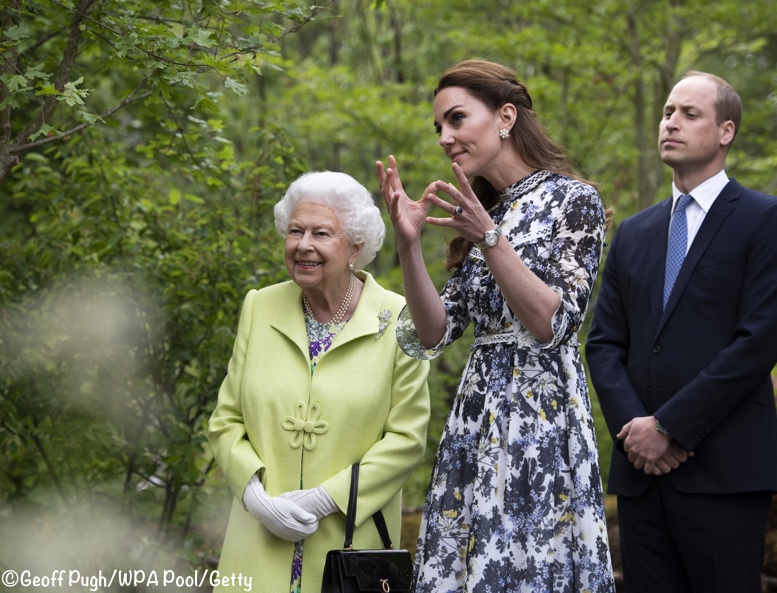 The Telegraph also noted that Kate was “…heard to say “Thank you very much, your majesty. We will see you later,” ahead of a private reception on site that evening.

In a Twitter post this afternoon Kensington Palace asked how high a score followers thought Prince George gave the Back to Nature garden on a scale of one to ten.

How many marks out of ?for the #RHSChelsea Back to Nature Garden, Prince George? pic.twitter.com/rJ44lUrHzd

Kate walking in the garden. This year there is a D-Day 75 garden at the Royal Chelsea Hospital, marking the June anniversary of the Normandy invasion in France. The garden celebrates the lives of veterans who took part in the Normandy invasion. A sketch showing

From the D-Day Revisited site:

11th Armoured Division veteran Bill Pendell MM was chosen by D-Day Revisited to represent the Normandy veterans in this garden tribute and he was so looking forward to attending the Chelsea Show in May.  Sadly this was not to be as Bill passed away 1st December, aged 97.  His loss calls into focus the diminishing time we have left with our wartime generation and strengthens our resolve to make this garden a reality in his memory.

Below, a veteran in the garden today. The garden will be gifted by the veterans to the town of Arromanches, Normandy, on June 6. 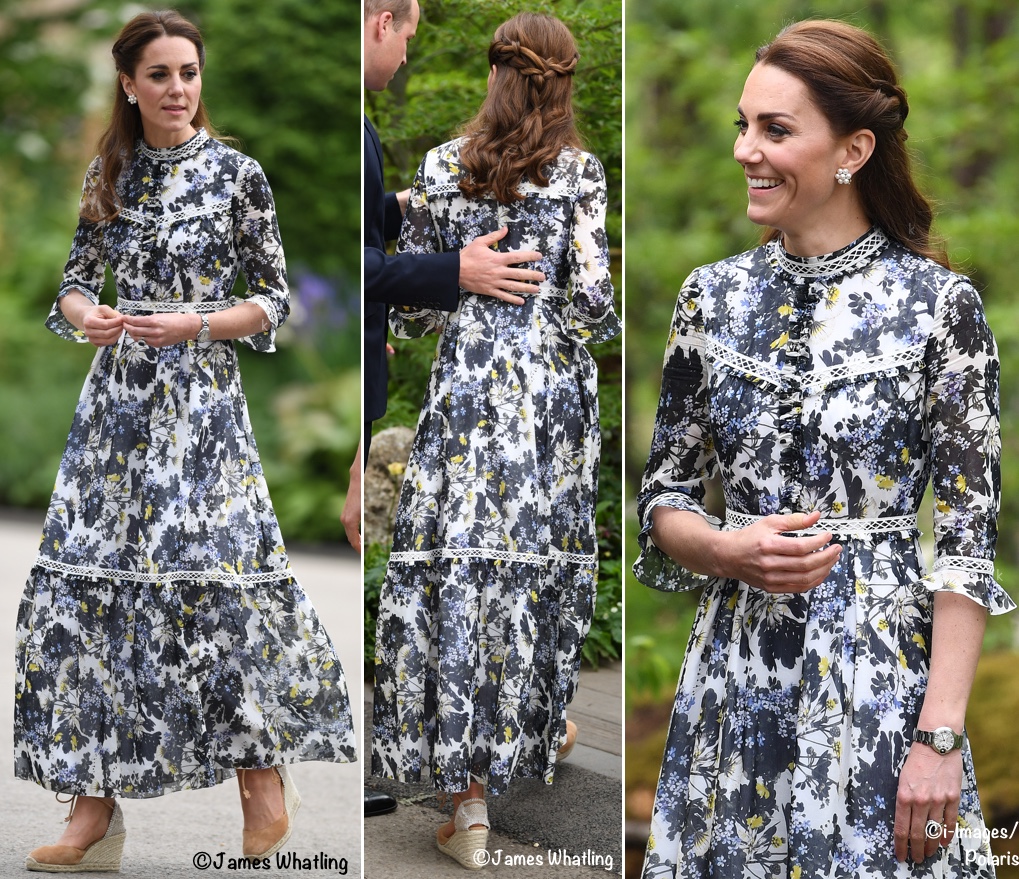 We’ll start with her Erdem dress, the Sheba Floral Silk-Cotton Gown. Kate has had several inches taken off the length of her dress. The piece is done in a linen/cotton blend, and it looks like the material includes forget-me-nots, a favorite flower of the late Diana, Princess of Wales. (FYI, a commenter noted these are false forget-me-nots.) The piece also had a high neck, 3/4-sleeves, and a hidden zipper on the back. In a fashion column for The Telegraph, Chloe Mac Donnell writes:

With a black and white floral print, it gave a subtle rather than obvious nod to the occasion. It also worked well and complimented rather than clashed with the Queen’s lime hued coat and bold floral printed dress.  With eight years of experience in attending events and royal duties, Kate is well aware that it is little details like this that offer a sartorial nod of respect.

Kate’s hair was partially back and braided. The Duchess wore her Cassandra Goad Cavolfiore Studs (£4490, about $5700 at today’s exchange rates).

The earrings are 18ct yellow gold, and each is set with seven pearls accented by diamonds.

One more look at the Duchess today. I’d like to see a post on the wedding, thank you. And I enjoyed seeing the maxi length dress on the duchess. It was a nice choice. Congrats on the beautiful garden and the family enjoying it. I loved the little video.

I would love to see a post on the wedding. Thank you!!

I have finally figured out what I don’t like about the Erdems (I have seen). I would like the ruffles to be a solid colour so they show properly against the pattern and emphasize the lace. Also I would like far more material,width wise, in the lower layer so the dress is much wider at the bottom. I believe those 2 (expensive) changes would really up the look for me.

Thank you all for your comments. I learn so much here.

Please do a post on the latest royal wedding!

While I think the mustard color Erdem is the only dress I ever thought looked BAD on Kate, I'm not a fan of this one. She looks lovely, and I see why this "works" for the occasion, but I find it too fussy. But I love her hair - the braid is fantastic.

I love about 90% of Kate’s choices. But not this one!!! I have never been a big fan of Erdem in general, but this looks frumpy and looked far better in the shorter version the princess Eugenie wire. NOTE: admin edit

Is Kate wearing a "Victorian" style dress? Or a "Little House on the Prairie" TV version of what costume designers decided American women and girls wore in the 1870s and 1880s?

I read every single Laura Ingalls Wilder book. The Ingalls didn't have 2 nickels to rub together and sometimes faced near starvation. Plus blizzards, locust plagues, malaria, scarlet fever, claim jumpers....Fashion wasn't a priority. So when I read the comparisons to Little House, I always wonder exactly what is being referred to.

I realized it's probably the sanitized Melissa Gilbert, Michael Landon show - mostly inaccurate, cutesy and sentimental.I remember some label called Gunny Saxe marketing prairie clothes, and maybe McClintock? I was too old for those styles, and remember them as being very short-lived, anyway.

I would call Kate's dress Victorian in style, especially the fabric. Sorry, but as an historian I get itchy when there are so many references to Little House and prairie dresses. There are a few photos of Laura, and not a ruffle or fuss to be found.Not meaning to offend anyone -- just wish there was another way to describe the raft of fussy fashion that hit the stores with the TV show besides prairie or Little House.

Gunne Saxe was the label you are thinking of, and the "Prairie Look" was one of Ralph Lauren's first big hit collections circa 78 - 81 as I remember...along with his safari themed look too...