Favorite Photos from the Duke and Duchess’s Wedding

Today is the Duke and Duchess’s ninth wedding anniversary (can you believe it?!) and I thought it would be fun to share some of my favorite images from the day. First, today’s Kensington Palace social media post thanking everyone for sending their best wishes to the Cambridges. And now, some of the pictures from that amazing day, beginning with this one of the Duchess on her way to Westminster Abbey. It looks like she was doing some deep breathing exercises, perhaps to calm any jangled nerves.

Also on the way to the Abbey, this photo. The expression on Michael Middleton’s face is just terrific. A closer look at the father of the bride. And Kate looked particularly radiant beneath her veil. This one of Prince William arriving at the Abbey is another favorite. The images of Kate looking back at the crowds after arriving at Westminster Abbey are almost all fabulous, as we saw her in those last moments before she became the Duchess of Cambridge. Once inside, the last-minute arrangements of the gown by Sarah Burton and Kate’s sister Pippa. This father-daughter moment just before the ceremony got underway. And this three-shot was outstanding, especially the look on Michael Middleton’s face. During the service, I always loved this shot of Prince William. The couple laughed after a little hiccup when William struggled to get Kate’s wedding band on her finger. The Duke and Duchess just as they were about to exit the Abbey. That is moments before they saw the throngs of people and heard the delighted roar from the crowd. Kate’s face as she looked at William when getting into the carriage made this a favorite. And this picture showed such outstanding expressions. The couple looked very much in sync during the carriage ride. This isolated image of Kate looking radiant is one I have always liked. As the couple passed the Cenotaph in Whitehall Kate bowed her head and William saluted; that little lift of Kate’s veil from the wind and the expression on her face make this another favorite. The look on the Duchess’s face in this picture also resonated. This is the only photo from the wedding reception I can license, thus, it’s my favorite wedding reception picture (lol), as it does allow us a full-length view of the Duchess as she chats with Australian Prime Minister Julia Gillard. There are several pictures from the balcony I am also fond of, including this one showing the twosome with no other wedding party or family members in the frame. This image had so much going on it is another favorite. 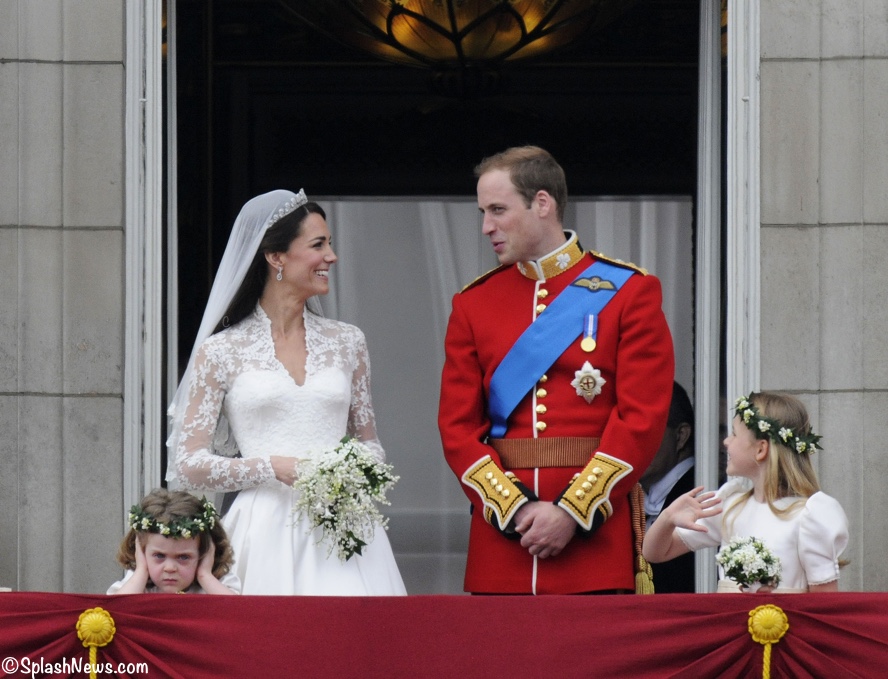 Grace van Cutsem (lower left) was not reveling in the noise, Kate was laughing at whatever William was saying and Margarita Armstrong-Jones was watching the newlyweds.

This is one of my favorite photos of the day. As is this, the two looked just elated as they drove Prince Charles’s Aston Martin from Buckingham Palace to Clarence House. One more view of the ride to Clarence House. We’ll close with this image, another one I very much like as the couple reaches for each other’s hands, and Kate’s veil is lifted by the breeze. Happy Anniversary wishes to the Duke and Duchess. Does it seem like nine years to you?

If interested in reliving any or all of the wedding, here is the full 3-hour, 45-minute video!