Hello-hello, and welcome to another post filled with Bits and Bytes.  We begin with news about some new/old photos of Kate and Prince George enjoying a mother-son outing at a public park near the family’s Anmer Hall home.  Australia’s New Idea has the story in its April 20 issue.

The pictures show Kate and George enjoying themselves at Snettisham Park, a working farm that also boasts lots of attractions for young and old, including a petting zoo.

END_OF_DOCUMENT_TOKEN_TO_BE_REPLACED

We are back with a few more of our 2012 polls, Our first poll looks at Kate’s “old,” or previously seen footwear. We’re doing this one because I think favorites may change or differ from last year’s choices after having an additional year of seeing Kate wear the shoes in different settings with different outfits.

We begin with the Jimmy Choo “Cosmic,” part of the brand’s 24:7 capsule collection of handbags, shoes and boots. It features a towering 5″ heel atop a 1″ closed-toe platform. Kate’s version is black suede, selling for $695 at Jimmy Choo, as well as Net-a-Porter. (There are many other finishes available, including patent and glitter.)  Here is an example of Kate wearing the Cosmic with a shorter dress, providing a good look at the shoe.

END_OF_DOCUMENT_TOKEN_TO_BE_REPLACED

Kate’s Outdoor Visit With ARK Students, Then It’s Polo for Lupo & The Duchess

Kate’s busy weekend continued today, she spent time in the country with 28 children, they were gently ‘roughing it’. The event was at Margaret McMillan House in Kent, it is part of a Widehorizons program that exposes children to the outdoors as a way of developing teamwork skills and building self-esteem. From the Widehorizons website: “We believe that every child should have access to adventureÂ as part of their education and throughout their lives.” The charity is part of ARK Schools, an arm of William and Harry’s much larger ARK organization, Absolute Return for Kids.

Once again The Daily Mail’s Rebecca English was on hand to cover the event, she shared this via Twitter: The children are students from London’s King Solomon Academy.

For many, it is the very first time they have seen the countryside. Today the kids made dough sticks with Kate, dough wrapped around a stick and toasted over the fire. Kate seemed very much at home and appeared to revel in her time with the youngsters. Here she is with one of her funny faces. Below, another anecdote shared by Rebecca English on her Twitter feed.

The Duchess and students. Here is more from Rebecca’s story:

Zahid Shanvere, eight, made Kate roar with laughter as he held open the tent flap for her and said: ‘After you.’

‘What a gentleman,’ she said.

She was in fits of giggles again when the children told her that they had been a little scared on their first night out under the stars.

‘What were you scared of? That a spider might creep in?’ She asked. Kate was dressed for the outdoors. 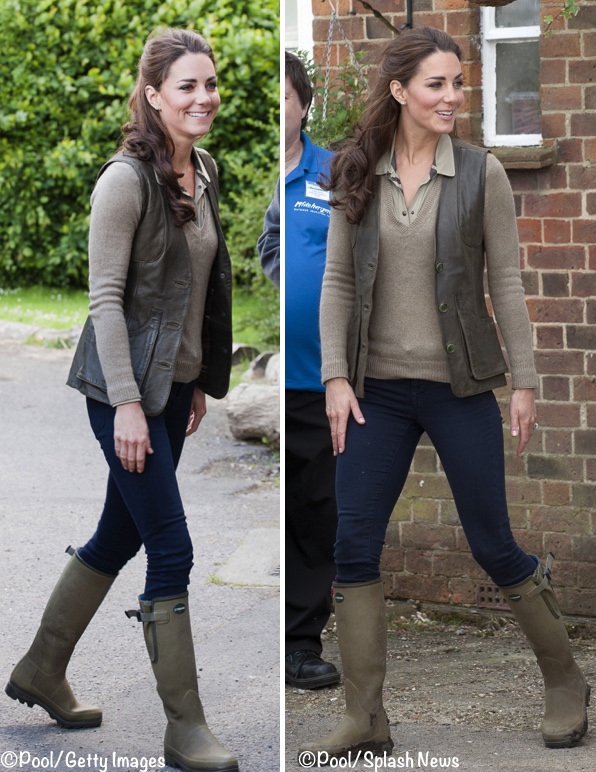 We owe a huge debt of thanks to all of the supersleuths who are WKW Facebook friends, they did the hard work identifying items while yours truly was out of pocket most of the day. Kate was in a vest by Really Wild Clothing Company, the brand’s Shooting Waistcoat in the ‘moss’ colorway, Michelle located the waistcoat quickly this morning.

Anna of My Small Obsessions also helped in the ID, above we show the piece at the site where Michelle located it, London Trading Company, it is $870. Michelle is also the whiz who remembered Kate’s fondness for the Really Wild brand, sharing this link to a 2011 Telegraph story talking about that classic shot of Kate wearing Really Wild in front of Blenheim Palace in 2004. Thanks to Ashley Margot for pulling up a link to Kate’s Classic Short Skirt in soft green, many will also remember the Conifer Overcoat the Duchess held over her shoulder. (Click here for the Telegraph story.) The brand is available for purchase at the Royal Berkshire Shooting School, as well as many retailers.

Kate wore the Burberry shirt we saw during the couple’s North American tour last year, here she is wearing it July 5 during a visit to the Dechinta Centre for Research and Learning at Blachford Lake (left) and again for the camping adventure. Kate was in the Le Chameau ‘Vierzonord‘ wellies we have seen on many previous occasions, they remain available in many sizes at Philip Morris UK, the US version of these are the Ladies Vierzon Nord, we show them at Orvis, they seem to have most sizes in stock. The sweater Kate wore is by Zara; Saffy, Michele, and Ryan identified this one, Ryan’s photos of her own sweater helped in sorting through the possible sweaters.

The jeans were also identified by Anna at My Small Obsessions, they are Zara’s as well, the Slim Fit style. One reminder for readers, as mentioned by Cherry Sese Sumulong last night on the WKW Facebook page, Zara’s big sale is just around the corner. I’m guessing it will launch around Friday, June 22, but others may know better than I when it kicks off.

Following her time in Kent, Kate moved on to the Beaufort Polo Club. You can see she was accompanied by Lupo, the couple’s cocker spaniel. Both William and Harry were playing in today’s match.

We have not yet identified who did Kate’s suede jacket, we’ll update when we do.

We’ll see you tomorrow for Order of the Garter.

For more on the Widehorizons/ARK Schools event, we share these links: Before getting to our poll today we want to share a quick update on what Kate wore to watch Prince William play football Christmas Eve.

The photo was taken by Lynn News photo editor, Paul Marsh, The News is one of the local papers in Norfolk.

END_OF_DOCUMENT_TOKEN_TO_BE_REPLACED

Yesterday Kate and Pippa managed to make time for a beachside walk on the sandy beaches of picturesque Llanddwyn Island, near Anglesey.

Kate was wearing what looks like a Cashmere Cowl Neck sweater from John Lewis, discovered by Kate Middleton Style blog and WKW Facebooker Brittney. The piece currently sells for £49 (discounted from its original £99 price tag), about $80 at today’s exchange rates. The tunic length sweater is available in a number of colors, it looks like it has a very high snuggle factor, always a big plus.

Another eagle-eyed Facebook pal, Simona, noted that we have seen the sweater before, most recently in the days before Kate and William were married.

The always-on-top-of-things @MrsRegalEyes noted that Kate is wearing boots from Le Chameau, possibly the Chasseur style on the left, or the Vierzonord Wellington Boot, as shown at Philip Morris, also discovered by MrsRegalEyes. The Chasseur is lined with leather with a full length outer zipper, while the Vierzonord is lined in neoprene, and lacks a zipper, the sentiment is that Kate is wearing the boot shown on the right, they sell at £145, about $238. The Chasseur boot on the left sells for £295 in the UK and $449 at Orvis.

Le Chameau has been a favorite of royals and serious outdoorsy folks for decades, yours truly is a fan, having been introduced to them at Orvis, something of a favorite haunt. The boots are made by hand in France and the quality is amazing, you can learn more at the company’s website or Faceb

ook page. While there *is* a US website, it is informational only, you will need to select from the retailers listed if planning to purchase anything. We recommend Orvis based on years of wonderful experiences with the company, but there are many other good choices, including Cabela’s, also a splendid company.

Others on hand included Pippa’s longtime romantic interest, Alex Loudon. The Duchess also sported a pair of skinny jeans and carried an olive jacket. It is nice to see the two sisters spend some time together, the island looks absolutely gorgeous.

Also today, we finally have another UFO (Unidentified Fashion Object) riddle solved, thanks to the stellar sleuthing of Facebook friends My Small Obsessions and Brittney (yes, the very one mentioned above), they have identified a necklace worn by Kate on many occasions, most notably her engagement photos. The official name of the piece is Elsa Peretti® Cabochon by the Yard necklace, the version shown on the right from Worthpoint is identical to Kate’s, below we show the contemporary version at Tiffany. Elsa Peretti® Cabochon by the Yard Via Tiffany

Here is how the current version of the necklace is described on the Tiffany site:

The necklace is currently available online for $995. As noted on Diana’s Jewels, Kate has been seen wearing the necklace at least as far back the 2008 wedding of Lady Rose Windsor and George Gilman.

There are matching earrings available at Tiffany, appropriately called the Elsa Peretti® Cabochon by the Yard earrings, you can see the quality of the lapis lazuli stones in this photo. On the right we show a closeup of Kate’s earrings (via Diana’s Jewels), clearly different in many ways from the Tiffany earrings.

Kate’s have a tiny bezel set diamond and the blue stone is set in a drop that dangles freely from the top portion of the earring. It is widely believed that Kate has a Diamonds by the Yard Bracelet the picture below is from the couple’s North American tour where it was seen almost daily. A big tip of the hat and thank you to both Brittney and Our Small Obsessions, this was remarkable detective work on their part, they show why we enjoy the WKW Facebook community so much.