We journey back again to look at another appearance by Miss Middleton, this one at at a high-profile event, a wedding in January. 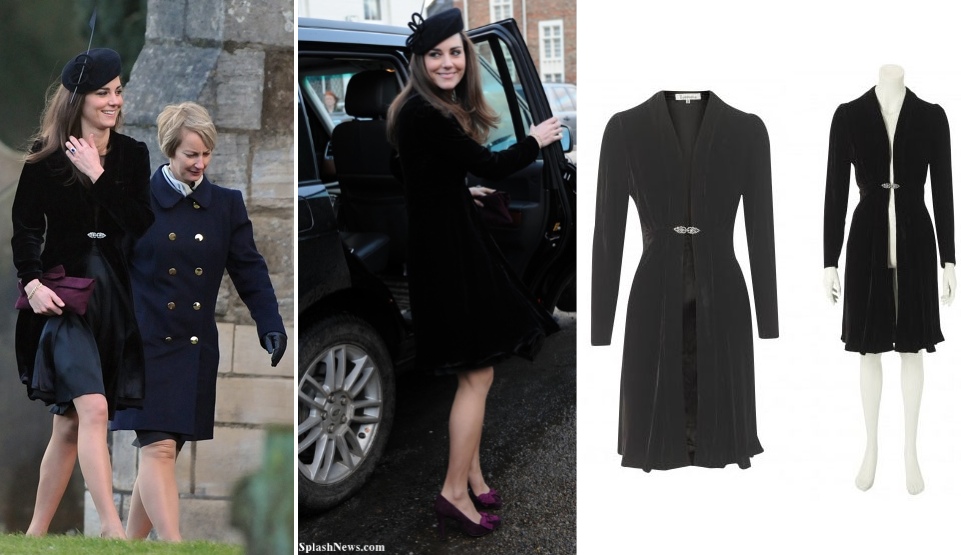 The bride-to-be looked smart, wearing a black velvet coat by Libelula over a sheer top, an ensemble under scrutiny by some observers.  For one, the color black is almost never worn by royals unless at a funeral or memorial service; additionally there was the issue of…well…. we will merely say it involved proper foundations. Here is how The Sun’s Toni Jones put it:

Wearing black has ruffled a few feathers. But give the girl a break. Not wanting to steal the bride’s limelight, Kate chose a simple LBD.  The neckline was a tad risque but once a princess, Kate will be advised to keep outfits “safe”. So let her have some fun now. I can’t wait for the hen do get-up.”
Here is how The Telegraph described the look:

“She chose the wedding of her and Prince William’s close friends, Harry Aubrey-Fletcher and Louise Stourton, in Yorkshire on Saturday to unveil her latest style discovery – a sleek and softly tailored, black velvet coat, with diamante buckle, from the independent London fashion label Libelula, which means dragonfly in Spanish.”

Here is how the coat appears on the company’s website. “The coat was not only remarkable for its sombre shade, but also for its plunging neckline, which revealed the semi-sheer bodice of the dress beneath, and its attainable price tag of £310, a mere fraction of what similar silk velvet coats from international luxury designer brands would cost.”

Prince William served as a groomsman at the wedding.
The circumstances are reminiscent of an eyebrow-raising appearance made by Prince William’s mother, Lady Diana Spencer, at her first high-profile event following the announcement of her engagement to Prince Charles.
The daring black silk taffeta gown by David and Elizabeth Emanuel set some tongues to wagging, in large part because of the color, as well as its daring decolletage.
.
At any rate, if hopeful of acquiring a Dulwich for yourself, there are limited sizes available online at the Libelula site. The company also does wedding gowns.