We wouldn’t be doing a very good job at cataloging Catherine Middleton’s style statements if we did not at least mention The. Blue. Issa. Dress. As almost everyone knows, the Issa frock was worn for the couple’s announcement of their engagement in November 2010. The color was stunning on the bride-to-be. Silk jersey is a marvelous textile; it is flattering without being too revealing. It was simple yet elegant. Here is how the dress was described online:

Electric blue Issa dress is sassy, a perfect special occasion dress and the colour is amazing. Issa has built up a reputation for getting the fit perfect to the body, the designer understands the body and an Issa dress will flatter your shape no matter what shape or size you are. With Issa once you understand the twist and drape that works best with your body you will be a customer for life. The designer is Brazilian-born Daniella Helayel; she founded Issa in 2001. Clearly, Ms. Helayel knows more than a little about draping. More on the designer from Fashionotes:

“And Middleton is only the latest in a line of celebrities to don the label; others include Madonna, who wore Issa’s teal, pheasant-print jersey dress on The Oprah Winfrey Show in 2006; Scarlett Johansson; Kylie Minogue; Keira Knightley; Sharon Stone, and Jemima Khan.”

The dress was available for a brief time at Joseph M and Net-a-Porter but quickly sold out before being reissued. As of 12/12, it remains available in limited sizing at Harrods and My Wardrobe, among other shops. There are plenty of other Issa choices available online, many stores now offer the brand, including Shopbop and Bloomingdale’s. 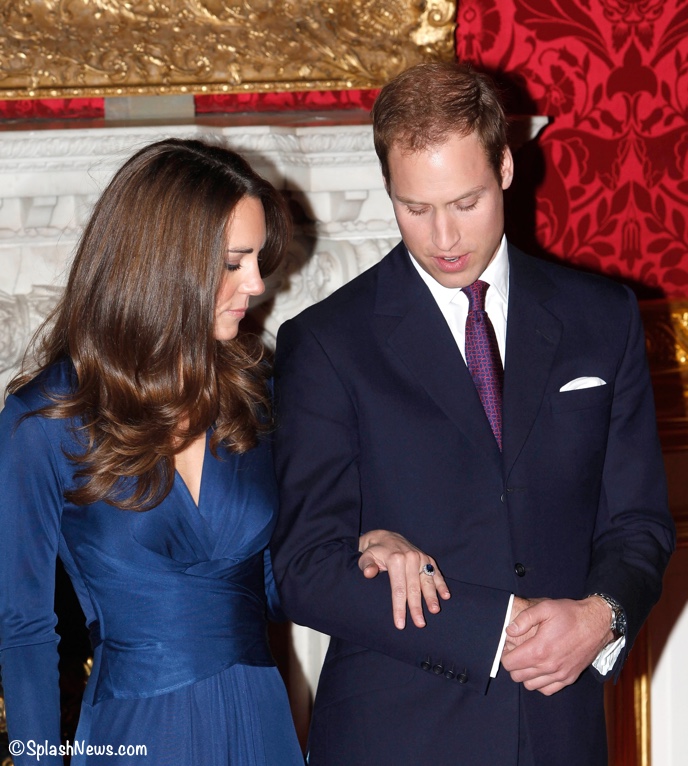 Of course, this is the ring worn by Lady Diana Spencer upon her engagement to Prince Charles. Prince William, speaking about his decision to use his mother’s ring:

All of it worked extremely well on the future Princess.

Necklace is Tiffany by Elsa Peretti. I also believe it to be sapphires in 18k-gold, because that's what they in Tiffany's work with :)

Do you know who made the earring and necklace she is wearing here?