We take a break from our year-end polls to update you with a few items about Kate. The National Portrait Gallery officially unveiled its first portrait of the Duchess of Cambridge today. William and Kate were given a preview before the painting went on public display. 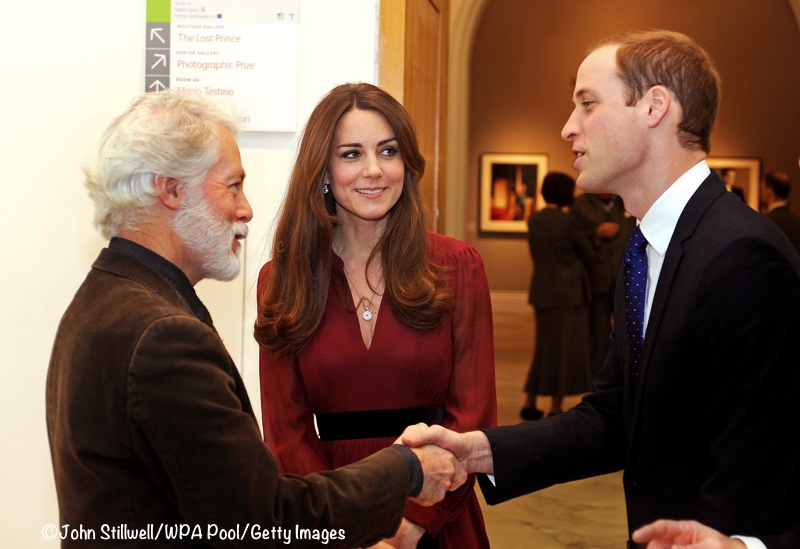 Above we see the couple chatting with Paul Elmsley, the artist. More on how he was chosen from the Palace news release:

The Duchess was involved in the selection process, from which artist Paul Emsley, the 2007 winner of the Gallery’s BP Portrait Award competition, was chosen by Director Sandy Nairne to paint her official portrait.

Mr. Elmsley was born in Glasgow, Scotland and raised in South Africa. The NPG site has background on the painting:

The Duchess explained that she would like to be portrayed naturally – her natural self – as opposed to her official self. She struck me as enormously open and generous and a very warm person. After initially feeling it was going to be an unsmiling portrait I think it was the right choice in the end to have her smiling – that is really who she is. The portrait shows Kate against a dark background, a signature trait of the artist. For those curious about what Kate wore in the portrait here is more from the Daily Mail:

She is wearing a bottle-green pussy bow blouse and a pair of earrings that were a wedding gift.

The earrings appear to be the sapphire and diamond pair re-fashioned from a set belonging to Princess Diana. The Duchess did two sittings last May and June, the first was at Kensington Palace and the second at Mr. Elmsley’s studio. More from the Telegraph:

The painting was commissioned by the National Portrait Gallery and, following her suggestion, depicts her natural, not official, persona.

The Duchess told the artist: “It’s just amazing, I thought it was brilliant.” The portrait is proving rather controversial, being described as “rotten” in the Daily Mail and Kate as having a “vampiric, malevolent glare” in The Guardian. But Canada’s National Post offers this:

In fairness to Emsley, some artists had praise for his work.

‘I liked it, very much so,’ said Richard Stone, who has frequently painted members of the royal family. ‘So often with official portraits they can be rather stiff and starchy, but this has a lovely informality about it, and a warmth to it.’

The Duchess appeared happy with the work, according to the Daily Mail:

She spent 10 minutes studying the portrait before gesturing with her hands, indicating that she was particularly pleased with the way he had captured her around her mouth and nose.

‘Thank you,’ added the polite royal, who met the 65-year-old artist with his wife Susanne and one of his daughters, Maria, in a separate room after viewing the portrait privately away from him.

‘I had such a fun day at the studio,’ she told Maria.

Yet Mr Elmsley has my sympathy. Whatever he produced would have been roundly trashed by a large section of opinion.

Kate was in her burgundy ‘Sofie Rae’ dress from Whistles. The frock is 100% silk, with a deep vee neckline and what some call a “granddad collar”. It is below-knee length with significant fabric gathering at the waist and shoulder. We previously saw the dress when Kate and William traveled to Denmark in November, 2011 for UNICEF and when she visited Newcastle in October, shown below. She accessorized with her Episode Angel shoes, although hers are suede. She was wearing the same earrings seen in the portrait as well as her Asprey Button Pendant.

Kate’s family was also on hand for the private viewing, afterward, all enjoyed a private breakfast. When leaving the Gallery it appeared Kate was carrying a little present, I wonder if she was given a set of the postcards…?

“With William, 30, beside her (wearing eyeglasses), she was spotted clapping and laughing at the show at the Royal Albert Hall, and an observer reports she was looking “happy and radiant.”

Photos from Wednesday night aren’t available at either service I use for pictures, but you may view a gallery of them at The Telegraph. Seeing Kate well enough to be at public functions and appearances is a sign she must be feeling better, that is very good news.

Also today, a quick glance at that British Vogue story about Kate. More on the “Katepedia” directly from the magazine:

To celebrate the style evolution of a modern royal icon, this month Vogue, with writer Lisa Armstrong, set itself the task of analysing her every outfit, shoe and accessory to divine the vital statistics of Kate’s style.

“We pored over thousands of pictures, and probed her favourite designers to find her favourite neckline, sleeve length and silhouette, the secret of that dazzling smile, the hidden value of her “down-to-earth” glamour – and just how she might adapt her McQueen as maternity wear.”

The story is in the February issue of British Vogue, available at some bookstores and newsstands in the US. The magazine is also available on the iPad.

We’ll be back tomorrow with our next polls.

The dress is beautiful. She looks beautiful from head to toe.

I love the protrait. I took one look and fell for it. I love that it's such a classic style of painting for such a classic lady in a very public role.

I like so much her direct gaze -- looking at me looking at her -- she seems to be challenging her onlookers as to just how much they need to go on looking. Yes, they are welcome when she is performing her public role, but will they know when to stop when the pictures become more intrusive? It gives me a twinge of guilt for even taking part in such a respectful website as this , as I know, deep down, that I'm still contributing to the pressure for more images of her.

She seems to be telling me that no matter how many of those images there are, she will always remain a very private lady, and that there's a part of her none of us will ever be a party to -- it's such a direct, clear, self-aware and intelligent gaze, as she coolly assesses her onlookers.

I like so much that small Mona Lisa smile, as if for a private joke, and any implied reference to the Leonardo only underlines the Duchess's own very classic beauty, something which is timeless. I love the way just one of the earrings is shown, harking back to Diana with the double connotation both of tragedy, brought about by intrusive watching, and the intimate affection of a son for his mother.

And I love the hint of shadows and wrinkles round the eyes. These tell me that Catherine is a woman of experience, that she knows she has her prince and will live in a palace, but that these things, as ever, still come at a price, which she has had the remarkable maturity to accept.

I was delighted to see the Duchess venturing back out into public, and it's certainly a very pretty and flattering dress on her, both in colour and style.

My only regret is that she still seems bent on wearing full skirts in flimsy fabrics when out in the open and I would have thought she'd had enough sartorial embarrassment of that sort by now.

Kate looks more amazing in the dress than the model does!

Portrait of Kate is awful. She looks old; her eyes are too small; her cheeks are too big and her smile all wrong. I can paint her and make her more beautiful!!