William and Kate continued their visit to Scotland, starting their day at Dumfries House, a stately home in Ayrshire.

Prince Charles has been involved in restoration of Dumfries House for years. The Earl and Countess of Strathearn joined forces with the Duke of Rothesay (as William, Kate and Prince Charles are titled in Scotland) for the official opening of the new Tamar Manoukian Outdoor Centre at Dumfries House. Despite the chill, all three royals spent time doing a walkabout. Georgina Brewer of ITV shared this photo of William and Kate chatting with young Scouts. They were some of the more than 600 young people who are members of groups represented by Youth United, a network of youth organizations. Many had been waiting for several hours to ensure they had a good view of the royals. Some of the groups represented included the Sea, Army and Air Cadets, the Boys’ and Girls’ Brigade, Brownies and Scouts. These young ladies look like they were a little nippy. Prince Charles made remarks to the crowd as seen in this photo from the Mirror’s Victoria Murphy. How cold was it? More from STV’s story:

As Charles prepared to address the crowd, William rubbed his cold hands and told his father to “make it brief”.

Then William and Kate were off to Barrow-in-Furness, located in Cumbria. The couple visited BAE Systems where the Royal Navy’s Astute-class Submarines are built. William and Kate met with employees and also toured the facility. Prince William is Commodore-in-Chief of the Royal Navy Submarine Service.

Kate repeated a recognizable piece, the red coat by Armani worn for William’s passing out from Sandhurst in 2006. The button on the coat was moved to create a little extra room, better accommodating Kate’s pregnancy.

The Strathearn Tartan scarf Kate wore for the Order of the Thistle and Jubilee River Pageant also made another appearance. This is the scarf famously worn by Kate Middleton (or, if you prefer, Her Royal Highness The Duchess of Cambridge, Countess of Strathearn, Baroness Carrickfergus) on many occasions, including the Queen’s Diamond Jubilee Royal Pageant.

Catherine chose Strathearn tartan, of course. In fact Strathearn No.2 Modern tartan. (Click that link to select it.) But you can have yours in any plaid of your choice. And while you can’t see it in the photo above, Kate also brought back a brooch first noticed at last year’s Jubilee River Pageant. The piece features two dolphins topped by a crown, it was a wedding gift from the RN Submarine Service.

Kate was in her Aquatalia Rhumba boots again. 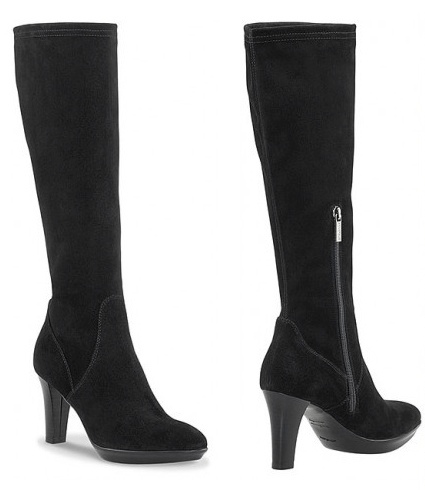 She also brought back her Kiki McDonough diamond and green amethyst earrings.

One of the day’s more memorable moments came during the walkabout at Dumfries House. An 11-year-old girl very much wanted Kate to see her doll. More from the Daily Mail’s Rebecca English:

Dayna proudly showed Kate her doll which had been put on her Christmas list and had been ordered by her mother from eBay.

Here you can see Kate’s reactions, the photo on the lower left may best show how perplexed she was. If you’re wondering what doll it was, Rebecca English of the Daily Mail shared this photo of Dayna with the doll. From Rebecca’s story about Kate’s close encounter with the not-so-identical creature with the big hair:

‘No! Oh no, is that me? Is that meant to be me? Does my hair really look like that!’ She exclaimed.

Some may recognize the doll, it was officially called the Princess Catherine Engagement Doll, they were offered by Hamley’s. More on from Victoria Murphy’s story in the Mirror:

Dayna said: “I told her she was much prettier than the doll and her hair was not nearly so big and she laughed and seemed happy.
I think she was a bit shocked by the doll though.
“I can’t believe how nice she was though. She was just lovely. This has been the best day ever.”
“Dayna is a huge fan of the royal family and has written seven or eight letters to them and had replies from all, even the Queen,” her mother added.

Please accept my apology for the delayed and abbreviated post, we spent more time dealing with technical gremlins today. The good news is that we seem to have the worst of it behind us.

FOUND THE MULBERRY eyelet dress! this is an older verison

With her amazing coloring, she always looks simply gorgeous in red. Love these photos.

she looks ok the coat is at least an appropriate length. It is just not that amazing of a coat.

The most successful maternity repurpose so far, I think! The lines of that coat lend themselves nicely to the small adjustment and still fall as intended. Its also a hue the Duchess wears well, in this coat, at the lifeboat dedication, and the McQueen river pageant dress. The tartan scarf is the perfect touch. All that said, I do wish that she'd done something different with her hair. With the wind, it doesn't wear well. The chic pony from the lifeboat dedication would have looked fab here.

I just love that silk scarf! The price is a little high for me but it is so beautiful, nicely finished off, and went very well with the coat.

I much prefer this look to the last one!