We are back with a few updates and IDs on things Kate has worn.

Our first item involves recent images of the Duchess on the cover of Australian magazine “Who,” you can see them in the upper right corner of the magazine. The story is described this way on the magazine’s website:

KATE MIDDLETON: COUNTDOWN TO BABY:
While her husband Prince William fronted on their behalf at a friend’s high-society wedding alongside his brother, Prince Harry, the duchess has enjoyed some last-minute beauty treatments and visits to her favourite shopping haunts as they count down to the birth of their first child.

I don’t have a copy of the magazine, but a friend shared a few pictures of the story. The photos are all identified as being from June 19th, when Kate was going to the Rossano Ferretti hair spa in Mayfair, obviously a change from the Richard Ward salon, although no one knows if it is a permanent switch or not. Both Carole and Pippa Middleton have previously gone to Rossano Ferretti.

As initially suggested by HRH Duchess Kate blog, it’s been confirmed Kate was wearing another piece from Séraphine, the brand’s White Maxi Skirt. 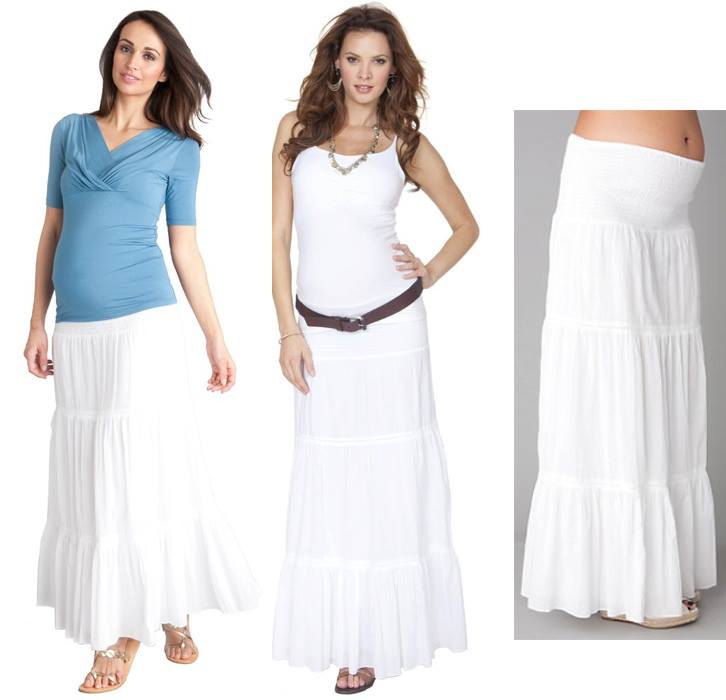 The piece is 100% cotton with a smocked, stretchy waistband, the company notes it can also be worn as a dress. It is available in both white and aqua at Séraphine, the piece is $69.

Many noted Kate is carrying an older Russell Bromley bag, My Small Obsessions shares these photos of the bag. As of this writing I do not know the maker of Kate’s cardigan, although it is a style readily repliKated for those so inclined.

In other news, advance preparations have been made at St. Mary’s Hospital for Kate’s arrival. Paul Harrison of Sky News shared this photo of the parking restriction notice near the entrance to the Lindo Wing of St. Mary’s. Media positions have been blocked out and assigned.  Royal photographer Mark Stewart shared this photo on Twitter. Some of the comments emanating from those who cover the royals have been entertaining, below is one from the aformentioned Mr. Harrison of Sky News.

We also want to update you on the latest Baby Cambridge Fundraiser news and thank some of our generous sponsors for their donations. Our new auction is underway, offering one lucky bidder three different pieces by Séraphine. The lot has two dresses and a wonderful changing bag/nappy bag.  Many will recognize that dress on the left, the Renata Wrap Dress with tie, initially featured in this post. The second frock is the brand’s Royal Blue Knotted Dress. The company is one of many running a promotion tied to the impending birth, this one can be seen on the iconic London double-decker buses. The banner asks the question many have been discussing:

Entries from those correctly guessing the baby’s name will be eligible to win a £1000 Séraphine wardrobe, more can be read here.

A number of media outlets have begun publishing columns looking back at Kate’s pregnancy, or looking at what’s ahead. Following are a few links:

“True to form, Kate has born the scrutiny immaculately. And silently. Even when she emerged from a three-night stay at the King Edward VII hospital, following acute Hyperemesis gravidarum, she managed to smile and wave.

In fashion terms, Kate’s pregnancy has been remarkable for its lack of maternity wear.

I enjoyed the piece. (Be aware of at least one factual misstep, a reference to Kate’s pink Trooping the Colour coat as being by Emilia Wickstead, when it was an Alexander McQueen.)

The Christian Science Monitor asks What’s A Royal Baby Worth? The answer: $376 million for the British economy.

The firstborn of Prince William and the Duchess of Cambridge is due in July. During that month and until the end of August, British retail sales will get a £243 million ($376 million) boost, predicts the Centre for Retail Research (CRR). Its report, published last month estimated that Brits will spend an extra £62 million ($94 million) on alcohol and £80 million ($121 million) on souvenirs and toys in two months.

The Telegraph reports Duke and Duchess of Cambridge give Royal consent to baby memorabilia.

While some could accuse companies of cynically attempting to cash in on the birth of the future heir to the throne, St James’s Palace has welcomed the souvenirs as part and parcel of the celebrations of what is expected to be one of the biggest celebrations of the year.

A spokesman said: “The Birth of the Duke and Duchess’s baby should be a joyous occasion, and we recognise there is a long and happy history of people producing souvenirs to mark Royal occasions.”

And my most recent Parade column is Three Maternity Ensembles, Three Distinct Messages.

Her outfit seemed to convey this sort of message: “I may be pregnant, but I don’t need coddling and I intend to stick to my schedule, thank you very kindly.”

We’ll be back in a few days.

I love the look of the long maxi white skirt. I think the grey cardigan is one she wore previously. I recall a photo of her before her wedding wearing white pants and a grey cardigan as well, with her hair done up as if she was leaving the hair salon. I love the fact that she does recycle her clothes and has remained so grounded in herself, not being too flashy since becoming a royal. I am enthralled with her as a person, being from America and love to look at her style. She has wonderful style mixing high priced items with reasonable priced as well.

I like that white skirt! It's kind of loose and borderline peasant style, and extremely correct for a day of getting your hair done and light shopping.

What a tiny bump!

Nice to be tall!

Anyone know why the Duchess hardly ever wears necklaces. She often leaves her neck bare even if the neckline is low - but I note she does wear earrings a lot. This is not a criticism at all but I've been wondering.

I very much doubt there's any special reason. Moreover, she wears her Asprey button pendant quite a lot. She also wore a ruby and diamond necklace with the strapless black evening dress in which she appeared shortly before Christmas of 2011. That was a dress that definitely called for a necklace, whereas many of her other dresses have not.

However, she is clearly something of a minimalist when comes to her preferred look. She may feel that wearing earrings AND a necklace is sometimes a bit too much.

Looking at the picture of the Duchess on the cover of the magazine, I am imagining that she's thinking something along the lines of, "All right, I've had just about enough of this pregnancy thing. How much longer do I have to be photographed everywhere I go while feeling like a beach ball!?"

Poor woman. It can't be easy awaiting your first baby with the whole world watching!