We are back with a brief update on what Kate wore to the State reception at Government House, a bespoke cocktail dress by Jenny Packham. The evening’s highlight was Kate and William’s unveiling of a new portrait of Her Majesty by New Zealand artist Nick Cuthell. Those with a good eye for detail may have noticed the fern brooch HM is wearing in the portrait. It is the same pin worn by Kate atop her red Catherine Walker coat on Monday, loaned to the Duchess for this trip.  Again this evening Kate demonstrated her skill at sending messages of respect and sensitivity through what she wears, her dress had an intricately embroidered fern on the left shoulder. Kate’s dress is knee-length, it has long sleeves and a modified bateau neckline, not to mention the exquisitely embroidered left shoulder. We hope to have larger pictures to share in another hour or two.

Prince William made a brief speech at the function, the The Mirror’s story has some of his remarks:

“Thank you also for hosting Catherine, George and me during our time in New Zealand. I hope that George doesn’t keep you up!

“He’s at his most vocal at 3am, as you may have noticed – I swear I heard him doing the haka this morning. The Duchess wore her trusty Jimmy Choo Cosmic heels. The pumps are available at Jimmy Choo for $695, and at Net-a-Porter, also selling at $695. UPDATED: Kate accessorized with her diamond bracelet and the consensus is they are the matching pair to the bracelet.  Below we show them from previous events.

We have an update on the Tory Burch ‘Paulina’dress Kate wore for Tuesday’s Plunket New Zealand playdate. 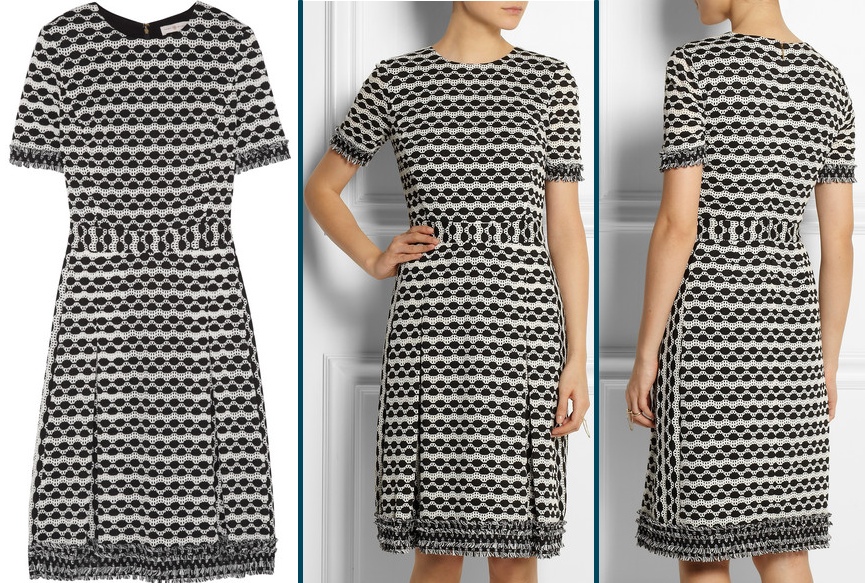 It looks like the dress will be re-issued through Net-a-Porter UK, at least from the looks of things. The screen grab is from this morning, I will try to check later today to verify this is the case.