Kate and William’s last day in Australia began with the ANZAC Day dawn service at the Australian War Memorial. People magazine’s Simon Perry reports, “William and Kate arrived at the ANZAC day dawn service at around 5 am and listened to readings before the full ceremony began.” The day was created to honor the anniversary of the first major military action fought by Australian and New Zealand forces during World War I. The day also honors sacrifices made by men and women in all wars.

The Duke and Duchess were the first royals to attend an Anzac Day service in Canberra since the Queen and Prince Philip attended in 1970. Governor-General Sir Peter Cosgrove and Prime Minister Tony Abbott were also at the dawn service. Mid-morning William and Kate attended the National Service at the War Memorial. The medals seen on Prince William’s jacket are his gold and diamond jubilee medals given for service to his Grandmother.  Both royals are wearing sprigs of rosemary; info from the War Memorial explains why:

Since ancient times this aromatic herb has been believed to have properties to improve the memory. Perhaps because of this, rosemary became an emblem of both fidelity and remembrance in literature and folklore. Traditionally, sprigs of rosemary are worn on Anzac Day and sometimes on Remembrance Day, and are usually handed out by Legacy and the RSL. Rosemary has particular significance for Australians, as it is found growing wild on the Gallipoli peninsula. WKW Facebook friend Rachael Tagg was at the Memorial today and shared this picture on the Facebook page. 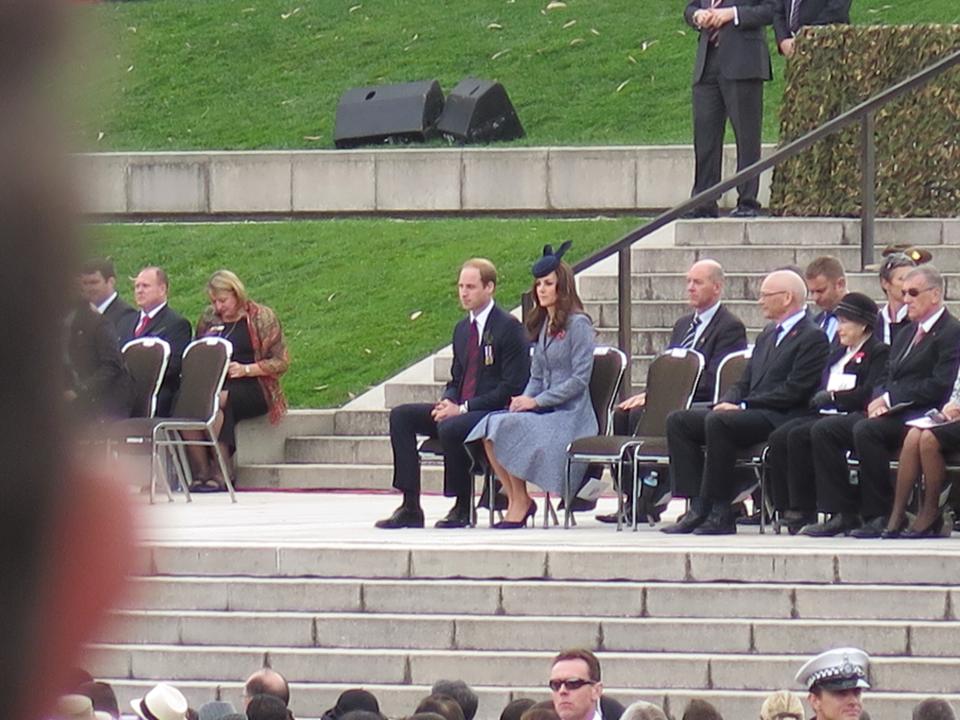 The view looking out at the crowd, shared by Sky TV’s Julian Morrison. The Duke and Duchess place a poppy on the Roll of Honour. It is a striking sight, looking at the number of names and poppies. The flyby by F/A-18 Hornet fighters. Camilla Tominey and Richard Palmer of the Express were talking about the fact these are the same fighters William and Kate saw at the Amberley RAAF base on Saturday (the 19th), Kate climbed into the cockpit of one of these wearing her LK Bennett Lasa Poppy dress. At the Unknown Soldier’s Tomb, they placed bouquets. More from this News.com.au story.

Nestled in each of the posies was a small wooden commemorative cross with a handwritten message from an Australian school child.

The neatly written message in Kate’s posy read: “In every second of every day, you will be remembered for your courage and your bravery. Thank you for your sacrifice and for what you have done for us. For that, I am truly grateful.”

The cross was part of the Australian War Memorial’s commemorative crosses program. The crosses are distributed to school children to write messages of hope and thanks. They are then sent over to the Western Front to be laid on the graves of the Australian war dead. They also placed a wreath. The card accompanying the wreath William and Kate placed on the Tomb reads, “Never forgetting those who have paid the ultimate sacrifice for our freedom.” Both royals planted Aleppo Pine seedlings grown from seeds gathered after the battle of Lone Pine at Gallipoli. Now for our look at what Kate wore for both of today’s ceremonies. This morning the Duchess wore her Temperley Noa coat seen at Remembrance Sunday events last year. The Duchess changed into a Michael Kors look for the next service.

From the designer’s s/s 2014 collection the piece is described as an “indigo twill jacquard swing coat” by Hello! Magazine. It features a fit-and-flare silhouette, front flap pockets, slightly puffed sleeves at the shoulder, front button closure, and full skirt. The piece originally retailed at £1870, roughly $3150 at today’s exchange rates.

The Duchess isn’t the only celebrity to wear indigo twill items from the Michael Kors spring collection; below we show of-the-moment actress Lupita Nyong’o in separates in the same fabric, worn to a pre-Oscars Women in Film party. Kate’s coat and hat were in keeping with a military color scheme. It turns out the Duchess’s hat is by an Australian milliner, Jonathan Howard. The Courier-Mail had the story:

Mr Howard was contacted by Kensington Palace in January and asked if he would like to create a piece or pieces for the Royal Tour of Australia. Kate’s is the Boutton style, available in a number of colors. It sells for $540. It is very similar to the Minoo style; the most obvious distinction between the two is the length of the fabric extensions. Both styles are from Mr. Howard’s spring racing collection.  We learn more about the process of dealing with the Palace by returning to the Courier-Mail story:

“More than 30 emails were exchanged, finished samples sent to the Palace for consideration and approval, along with colour swatches too,’’ Mr Howard says.

“The colour palette changed several times, with the final colour to be a dark navy blue as seen today.’’

The chosen modern headpiece known as Boutton (and in a appropriately named ‘Duchess Blue’ hue) is on website www.hatmaker.com.au.

The Courier-Mail story says Kate purchased more than one hat from Mr. Howard, something to look for in the future.

The Duchess had on her diamond and sapphire earrings and appeared to be wearing the Woodland charms by Asprey of London seen earlier in the tour.

Kate was wearing a anemone pin that was a gift. People StyleWatch has details on the pin:

Pinned just below Kate’s lapel was a poppy brooch given to her by the wife of soldier Ben Roberts-Smith, recipient of the Victoria Cross, Australia’s highest honor.

UPDATED April 28, 2014: The always-brilliant Ayvee of Diana’s Jewels shared news that this isn’t a poppy, it is actually an anemone. The design is a reproduction of a Carl Faberge piece, the brooch is sold out, but a variety of other items are, including a cuff and earrings.

Ayvee’s post on the piece can be seen here.

We’ll leave you with one more photo of the couple. The hat reminds Susan of a "bird in flight". No-one has noticed that the hat reminds one of "wings" – appropriately reminiscent of air force pilots. It was after all ANZAC Day. I love the hat!

I LOVE this hat too...It's a GREAT tribute. - It is basically like an Air Force Badge (3D), commonly seen on pilots uniforms - It couldn't be more obvious!!! I particularly like this coat, she looks stunning, respectful and solemn. She & William are completely colour-coordinated, both wearing the colours of the OZ, NZ & UK flags (his suit/shirt & her coat are Blue & white and accessories in red) ...........George is also dressed in red (Gorgeous!). The three of them together symbolise Loyalty, Bond and Common Allegiance (between Commonwealth nations). Bravo!, Bravo!

As a sum up. I think Kate looked much better on the Canadian tour. Her fashion choices and styling were terrific - and she was doing them by herself. Kate knows what she looks best in. My sense is that there are too many people who are now "helping" her with her look. The Palace clearly wants to make make her look older -- so losser fitting dresses, (I notice those jeans made only a brief appearance early on) longer hems and looks that are a bit frumpy. Or those silly dresses that infantilize her. Too bad. She's only 32 after all. She's looking less like a beautiful young woman and more like a middle age frump. As Ive said before go down the looks from Canada and this tour and see what you think.

I think Micahel Kors is a great designer and this is a well cut coat, but a bit boring. Kate looks washed out, as she often has on this tour.

I think its interesting that she wore the black Temperley coat, since they had not originally planned to attend, and she happened to have the black coat with her. I had read somewhere (don't remember where) that members of the royal family always travel with black suits in case they have to go into mourning. If we are to believe that they hadn't originally planned to attend (I do believe that), then this may be an example of the black suit that kate brought "just in case."

Wow Emily, that's a really interesting tidbit that hadn't occurred to me.

I think they always intended to go if they could, but didn't announce that publicly to a) keep the spotlight on the very solemn occasion and b) give themselves an out if they needed it. With the security they require, I doubt they do much with no planning ahead at all when it comes to appearing in public. They looked exhausted, poor things, but I think it was nice that they did go.

Wonderful coverage over the past weeks! Loves the Temperley Noa coat and the Michael Kors.