It was a spectacular ceremony.

I have been asked if this is like the Olympic Games Opening Ceremonies – it is in terms of similarly formatted productions: music, fireworks, dramatic staging and theatrics. But it is much shorter in length, running just under 30 minutes.

Prince Harry is the Honorary President of England Rugby, the official hosts for the World Cup. Tonight he delivered remarks at the event, more from Richard Palmer’s story in The Express.

“Rugby has changed dramatically in my lifetime. But it remains a game founded on a code of values. Values which are as important today, both on and off the field of play, as they have ever been. “Across the country, regardless of age, background or beliefs; this nation, which gave rugby to the world in 1823, will join together and celebrate the game like never before. The Prince concluded his comments by saying “We’re ready. Game on!!” There was a surprise in store for everyone: a brief film was shown during the Ceremony had an unusual guest star.

The Prince had a cameo in the lush, beautifully photographed historical piece; you can see the entire film here. Then it was time for the night’s match, England vs. Fiji. One could almost guess how things were going by watching the expressions on the royals’ faces. Kate in particular was animated; The Daily Mail has a feature showing many of her facial expressions.

England was victorious in its first match of the competition, taking Fiji 35-11. The Duke and Duchess seemed to thoroughly enjoy themselves. As noted in previous posts, this is a very big deal in many parts of the world. There will be stunts, promotions, and all manner of fun, frivolous (and arguably annoying) activities related to the Cup. Below you see this morning’s ‘Ball in the Wall,’ in Wales, in photos shared by the Cardiff Council. Cardiff is hosting 8 matches at Millenium Stadium, it is the only non-English host city.

Twitter has even come up with special emoticons, or emoji.  If using that social network, just type the pound sign (#) and the initials for the country you’re rooting for and a little football will show up on your tweet.

And of course, there will be plenty of coverage of WAGS, referring to the players’ “Wives and Girlfriends,” like this ‘Guide to Wives and Girlfriends‘ from The Daily Mail. (Ahem.) With any luck there might be some kind of fashion stories as well. Last night Prince Harry joined Prime Minister David Cameron for the Rugby Football Union’s (governing body for England  Rugby) official welcome party, saying he was ready for the “rollercoaster of emotions” the event will bring. More from The Telegraph, quoting Prince Harry’s remarks at the event.

As a passionate rugby fan, I will share the rollercoaster of emotions with millions of other fans around the world between now and the 31st of October. “It is this rollercoaster that makes sport, especially rugby, so compelling.”

As mentioned above, Kate wore a coat from Reiss. The piece is actually an item we suggested as ideal for last December’s New York trip. It is the ‘Emile Sharply Tailored Coat’ in ‘blue passion’ from the f/w 2014 season. The coat is 78% wool and 22% polyamide; it features a stand-up collar, two pockets, and a single button closure. It is a color that photographs very well. The Emile was also offered in pale pink, it originally retailed at £325, about $500. And it came in a color called purple, a hue that looks more burgundy or berry. Unfortunately, it is no longer available in any color. We saw Kate with a favorite handbag, the Stuart Weitzman ‘Muse’ clutch from Russell & Bromley.

Kate also carried a scarf by another brand she is fond of, Beulah London, wearing the label’s Blue Heart Scarf.  The scarf is 45% silk/55% wool. It is a good size, 80cm x 200cm, that’s roughly 31′ x 79″, and it retails for £85, about $125. The scarf is also helping to raise funds, 10% of the profits from sales of the piece go to the United Nations Blue Heart Campaign, an initiative designed to raise awareness of the problem of human trafficking. Pippa Middleton has been seen wearing the scarf, as has Kim Sears, tennis star Andy Murray’s wife.

We saw Kate’s ‘Power Pumps‘ in black suede again, another Stuart Weitzman design. The shoes remain available at Russell and Bromley (£235) in both the black suede and nude patent. 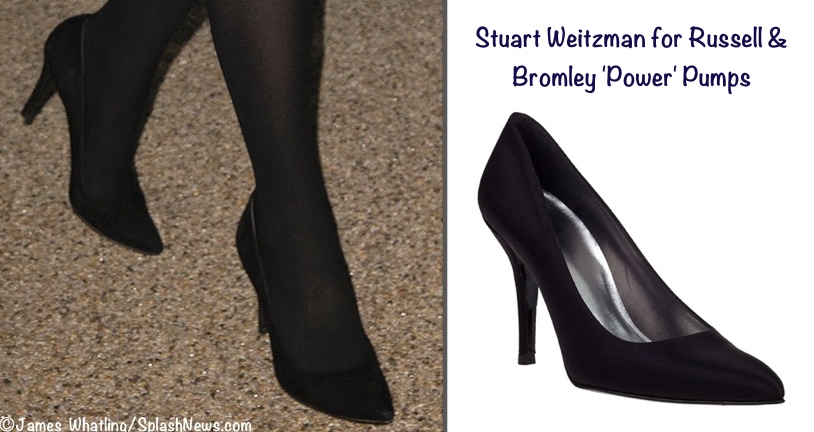 This was a great look for the Duchess, the color is very good on her and the cut is outstanding. A reminder that the Palace released word that William and Kate will attend a number of World Cup matches: “The Duke of Cambridge will attend a number of matches with The Duchess of Cambridge in his capacity as Vice-Patron of the Welsh Rugby Union.” The first match Wales is playing takes place Sunday, September 20; it begins at 2:30 local time, that is 9:30am EDT. The other three Wales matches are shown below.