This is the first time Kate and William have attended one of the parties together. The royals at attention for “God Save the Queen.” HM wore a coat by Stewart Parvin and a hat by Rachel Trevor Morgan. 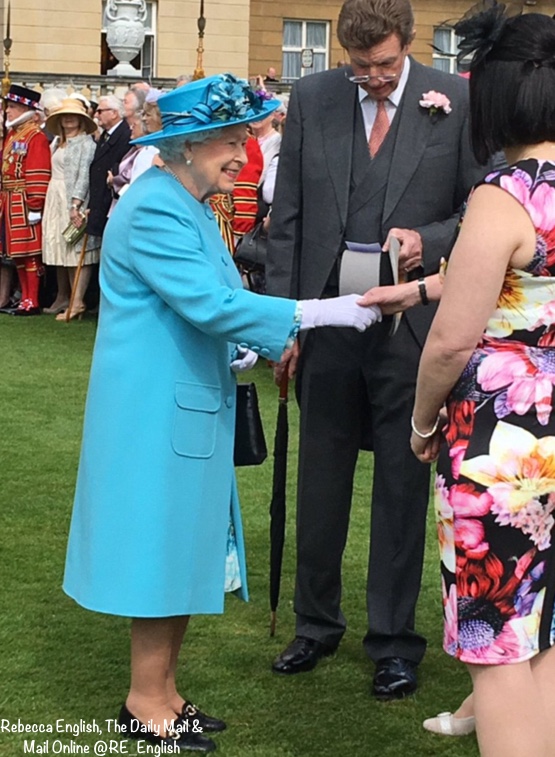 A bit more on how things work at these functions from The Daily Mail:

To the sounds of show tunes played by a military band, the Queen and members of the royal family circulate among the guests through different manned ‘lanes’, stopping randomly to speak to members of the public invited to the event.

They slowly make their way to the royal tea tent where they mingle with a small, hand-picked group of guests and dignitaries.

There is a dress code – although nowadays it isn’t strictly enforced – which requires men to wear morning dress or a lounge suit and women a day dress with a hat or fascinator.

Also attending today’s party, Getty photographer Chris Jackson, on Kate’s immediate left; you have seen his work on this site and in newspapers/magazines/online publications around the world. On Kate’s right in pale pink you see personal assistant and stylist Natasha Archer; hair stylist Amanda Cook Tucker is in the blue ensemble with an ivory or eggshell color hat.. CORRECTION: The woman on the far right is not Sophie Agnew, but Katie Tucker of InStyle magazine. Below you see Amanda Cook Tucker (left) and Natasha Archer (right) with Sophie Agnew (center), during the hike to Tiger’s Nest Monastery in Bhutan. Now for a look at what Kate wore. Another image from today. Here is how the McQueen ensemble appeared for George’s christening in October of 2013. Kate’s jacket is a bespoke version of the pieces shown below; on the left, the actual RTW (ready to wear) piece that was sold for Spring 2012; Kate’s version worn for the christening; the style as it looked on the runway. And the two ensembles. Kate accessorized with the same hat worn at George’s christening, the ‘Georgie’ style by Jane Taylor. Ms. Taylor described the piece as a “sophisticated sinamay beret with delicate silk organza rose and classic veiling trim”. This photo offers a better look at the beret portion of the hat. Kate wore a new pair of pumps for today’s party. Katy Aldredge wondered if perhaps it might not be the Gianvito Rossi in ‘antique rose’ suede; we show the style at Net-a-Porter.

Another possibility is the Gianvito Rossi in ‘praline,’ below we show it at MyTheresa.

UPDATE JUNE 15: The official color name is Praline; although different retailers may call it by a different name, like ‘antique rose.’ Our thanks to thanks to Tiffany C from the Facebook page, she shared some information she received from Gianvito Rossi that helped clarify things.

Kate appeared to be wearing her Kiki McDonough hoops with the Annoushka pearl drops.

Many felt the most interesting element of the party was the insider knowledge on the medical team for Charlotte’s birth. That information is in almost all of the articles about the party I link to below; The Telegraph and Daily Mail pieces have extensive quotes and information. Three other tidbits to quickly share:

In the letter Kate thanks the Children’s Palliative Care Network membership “for being the global advocate for children needing palliative care, and working to ensure that children and families across the world have a chance at accessing this vital lifeline.”  In the UK it is Children’s Hospice Week, Kate’s letter supporting those efforts may be seen here.     We leave you with a quick video from today’s party.

Duke and Duchess of Cambridge join Queen and Duke of Edinburgh for garden party https://t.co/Ue2uz3Mhpnhttps://t.co/hs9ovbMQDT

Gorgeous, gorgeous, GORGEOUS!!!!! I've grown tired of all the "repeats" lately, but we never got a good look at this suit to begin with. It's stunning...it's Alexander McQueen. :-)

I don't mind that the Duchess repeated the same hat she wore previously with this ensemble because it's just so perfect. Her hair and makeup are lovely. And WOW, this a great shoe on Catherine. I like her in this heel height. (Privately, I miss the trusty LK Bennett nude platform pumps...always thought they looked great on her. Wish she'd repeat them!)

I too thought we'd never see it again as I thought it was more of a 'portrait/special occasion only' style outfit but I'm glad the modern young royals do things differently. I also didn't like it (or the colour - the 'sickroom' spectrum) the first time round. But I didn't see a lot of it, the ruffle didn't appear to look as good & the skirt was obscured in pictures. The full picture has now emerged & it looks particularly engaging from the back view, feminine, the right length for elegance & that GORGEOUS peplum! I really do like this piece now! I don't understand why so many ladies want to put her in pencil skirts, a line that not only draws attention/the eye to the backside (what Americans call a** - in Britain, donkeys are asses) when a woman walks but also to the upper thigh because splits are required somewhere - this elegant line, which the Queen wore when young, shows the dress (and the eye is drawn to the whole image or the person, not the body beneath), job done!

Very nice post! I love that you include videos more often now :)

I adore the Christening/Garden Party dress and was thrilled to see it again! I am not a fan of 3/4 sleeves, so I love that this suit allows for the proper amount of fabric. The gentle ruffle is perfectly placed and adds so much to the ensemble. I have to say, regarding the official solo portrait, I was not happy with the makeup. I thought the "rouge" was taken to far down her cheek, toward her nose, and it did not enhance her innate beauty. Also, I may as well also comment on the neckline of that jacket worn for the solo portrait. The neck seems too wide and open for a piece that has a full collar. I wonder how it would look with a strand of pearls (has the duchess EVER worn pearls at her neckline?)

All in all some interesting posts this week. I enjoyed them immensely!

When I saw the ensemble for the Christening, I thought it was a heavy fabric, but you can see at the garden party it is actually quite a light filmy fabric, a pretty Spring outfit.