Kate debuted a new designer for this evening’s Art Fund Museum of the Year awards, wearing a dress by Barbara Casasola. The gala was hosted at the Natural History Museum, Kate is the Museum’s patron.  Above left you see Kate being greeted by Sir Michael Dixon, the Museum director; on the right and also just below, Kate greets Art Fund director Dr. Stephen Deuchar. The Duchess of Cambridge arrives at the Natural History Museum in London to present #MuseumoftheYear award pic.twitter.com/sMY0owX57Y

More about the award from an Art Fund news release: “The Art Fund Museum of the Year prize is awarded annually to one outstanding museum which has shown exceptional imagination, innovation and achievement in the preceding year. The prize of £100,000 is presented each year at an awards dinner attended by some of the UK’s leading figures in the arts and culture sector. The £100,000 prize is said to be the largest such award in the world. Below, the Duchess greeting nominees and judges. Dr. Deuchar addressing the crowd before Kate’s presentation of the award.

Kate chatted with guests about Prince George’s love of the Museum; more from The Express.

Nicky Wilson, of Jupiter Artland, West Lothian, said she was delighted to meet Kate, who told her Prince George has enjoyed a number of visits to the museum. Ms Wilson said: “She said he comes here quite often. He loves the 3D sculptures.”

Near the end of the evening Kate announced the winner, the Victoria and Albert, often referred to as the V and A. Here’s a video of Kate making the announcement from Emily Andrews of The Sun.

VIDEO: Kate announces @V_and_A as winner of @artfund & jokes about not being able to open the envelope! pic.twitter.com/YjM8Hm5HaA

As mentioned above, Kate debuted a new designer this evening, Brazilian-born Barbara Casasola. 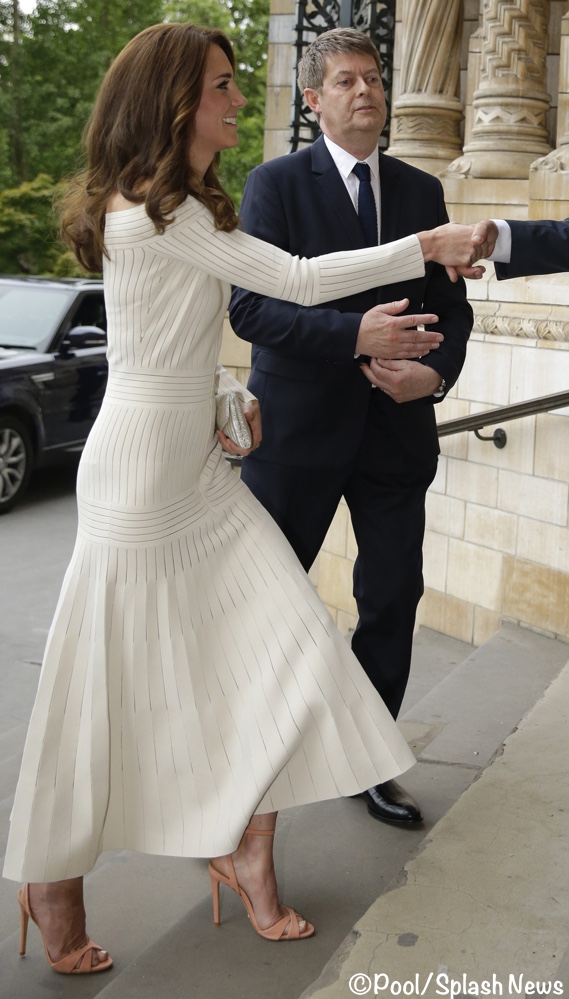 Ms. Casasola is another of the many designers Kate wears who attended the renowned Central St. Martins art and design school. She is based in London and shows her collections at London Fashion Week. Today’s frock is from her spring 2016 collection.

The Tribal Dress is crafted from a stretch jersey material, a viscose/poly blend that hugs the figure. It is an off the shoulder design featuring multiple fabric panels, a front zipper, wide waistband, three-quarter sleeves, and a fluted skirt. We show the dress at Net a Porter. This offers a look at the front and the back. Descriptions of the dress at online retailers show it as being sold unlined, I imagine Kate had a partial or full lining added to the garment. I can’t verify this without seeing some more photos, but it looks that way from what I have seen thus far.

Kate was in a new pair of shoes this evening, the ‘Dollie’ sandal by Brazilian-based Schutz. The style features a 4.5″ heel, criss-cross straps at the vamp and ankle strap. It was originally priced at $180 but it is $90 at Shopbop. The price is the same at The Outnet, where the shoe is still available in very limited sizing.

Based in Brazil, Schutz has been in business since 1995. More from Footwear News:

Schutz, a contemporary Brazilian brand that’s been around since 1995, has lately been spotted on celebrities such as Chanel Iman, Hilary Duff, Gigi Hadid and Solange Knowles.

Apparently Kate saw the shoes online or in person and bought them, it wasn’t a situation where the label sent her a pair to try out. That is according to the brand’s designer, Alexandre Birman, in the FN article.

“It came about organically and was a great surprise for us. It’s nice to see how strong the presence of Schutz is outside of Brazil.”

“Kate is a unique reference of style that goes beyond fashion, inspiring all women around the world. Having Duchess Kate wear Schutz was remarkable.”

Our thanks to Pinball Wizard on Twitter for IDing the shoes.

Wearing a Brazilian-born designer and shoe label headquartered in the country prompted discussion of Kate’s possible attendance at the upcoming Olympic Games. More about this in a story by Bethan Holt, The Telegraph’s digital fashion editor.

This was an Olympian effort from the Duchess in more ways than one. She has become savvy to the power of a dress to send a diplomatic message and with the Rio Olympics just weeks away now- they begin on August 5- Kate’s decision to wear Casasola is a very sophisticated acknowledgement that the eyes of the world will soon be upon Brazil, so why not nod to one of its classiest exports? This is gold medal levels of dressing prowess.

This was an unexpected designer and style, it is fun to see the Duchess experimenting with new brands and looks. Kate’s bag is one we have seen previously. Below you see her carrying the clutch to the Thirty Club dinner at Claridge’s in May of 2012. It remains unidentified; my guess is that it is a vintage piece.

The Duchess was wearing a new pair of earrings. It looks like a large freshwater pearl that is bordered in gold (or goldtone metal) suspended from a circular piece that may be a colored stone. (Perhaps an amethyst…?)

UPDATED JULy 7:  The earrings are by Soru Jewellery, the brand’s Baroque Pearl Earrings in gold.

The earrings are crafted of iridescent baroque pearls along with Swarovski crystals. They are set in 18ct Yellow gold vermeil over sterling silver. They retail for £130 (about $170) and were purchased at Baar and Bass. The style will be available to order soon according to both Soru and Baar and Bass, either firm may be emailed if you would like to be put on a waiting list for the earrings. 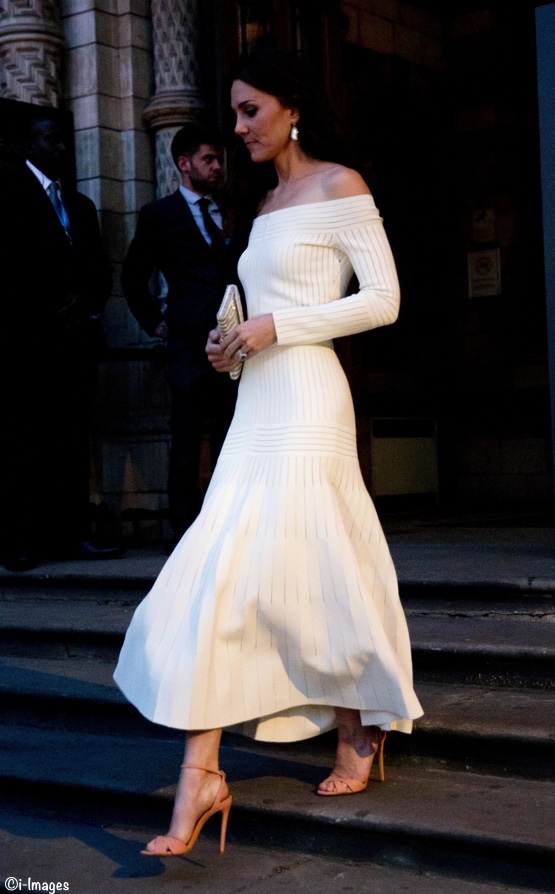 Another view as Kate leaves the Natural History Museum. Also this evening, The Sun’s Emily Andrews reports Kate will be at Wimbledon tomorrow. Serena Williams will play Russia’s Elena Vesnina and Venus William takes on Angelique Kerber of Germany.  The matches are not slated to begin until at least 1pm, that’s 8am EDT.

A special thank you this evening to Emily Andrews of The Sun who provided information, many (many!) photos throughout the evening’s event, not to mention the late word on Wimbledon.

NOTE: I promised our final poll would be in this post but unavoidable circumstances made that impossible, I hope to include it in tomorrow’s Wimbledon post.