Kate wore pieces by Smythe and Gap today for a schedule of engagements impacted by the weather. Heavy fog in Cornwall grounded flights this morning, including the chopper that was to have taken the Duke and Duchess to St. Mary’s Island. This prompted a last-minute schedule change; more via Victoria Murphy’s story in The Mirror:

Some of their entourage who could not fit on their chopper and most of the media intending to cover the visit became stuck on the mainland with flights cancelled because of the fog and boats – which take two-and-a-half hours – full.

The Duke and Duchess visited The Eden Project, the world’s largest indoor rainforest.

From Richard Palmer’s story for The Express:

Kate and husband Prince William did what thousands of holidaymakers do on a wet day in the West Country and headed for an indoor tourist attraction.

They rang the attraction, which opens its doors to almost 1 million visitors a year, near St Austell in Cornwall at 10.00am today to ask if they could come to see it and unsurprisingly, the owners said yes. The couple met a baby dinosaur puppet from the Project’s Dinosaur Uprising program. Nicole White, 27, introduced the Cambridges to a baby dinosaur puppet from the attraction’s Dinosaur Uprising project, which rather startled Kate.

She said: “Kate didn’t see the baby muttaburrasaurus at first as his colours blended in with my clothes so she had quite a giggle once she realised what I was holding.

“I just told her that Mutty really wanted to meet her and she said ‘I bet the kids really like him’.

The Duchess also said that Prince George would like to meet the dinosaur.

Back to Richard Palmer’s article

The couple, who spent more than an hour and a half touring the attraction and chatting to visitors, stopped for a quick refreshment half way round at a hut selling run and smoothies containing the African fruit baobab from Malawi.

Both sipped a baobab smoothie containing the fruit mixed with banana, coconut and other fruits. “It tastes a bit like mango,” William said. The impromptu visit offered Eden Project visitors the chance for a selfie or two with a royal head in the background. Fortunately the weather cleared up enough that Kate and William could visit two of the three Scilly Islands as planned, starting with Tresco Island. The couple’s first stop was at the renowned Tresco Abbey Garden.

You can see how beautiful it was on the Islands in this picture of Kate and William chatting with Tresco Island residents. It was definitely a day when Kate’s Ray Ban sunglasses were needed. 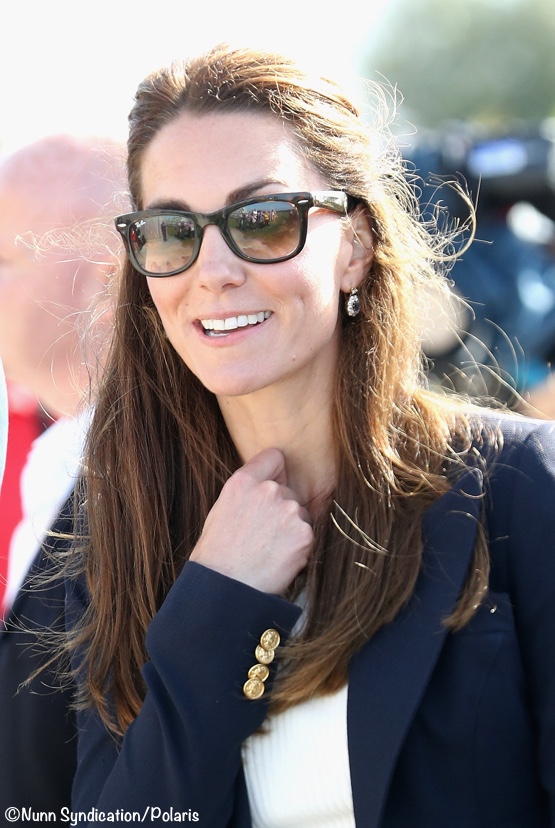 The couple arriving on St. Martin’s.

Kate was given a lovely bouquet when arriving on the Island.

The Duke and Duchess also visited St. Martin’s, these two boys were part of the group welcoming them to the Island. Another person greeting them was 89-year-old Gladys Perkins. More from The Mirror:

The pensioner, whose husband is a Duchy of Cornwall tenant farmer on St Martin’s, described how the second-in-line to the throne would visit the neighbouring island of Tresco with his parents and brother.

She added: “They visited as a family, William and Harry were quite small, but they were left alone no one disturbed them.” The 89-year-old was sat on a bench outside the island’s community centre surrounded by her family when the Duke stopped for a brief chat.

She said: “I said to William, ‘you haven’t been here for a good while’ and he said ‘no’. I said the ‘last time you were here with your brother you were only so high’.”

St. Martin’s is home to at Churchill Flowers Farm, known for its scented bouquets and arrangements that are shipped throughout the UK year-round. Here you see Kate and William at Scilly Flowers where shipments are prepared. Kate was dressed more casually for today’s engagements, sporting the Gap Bi-Stretch Skinny Ankle Pant in the Ikat Blue print. The trousers are a blend of 95% cotton/5% spandex in a skinny profile that hits at the ankle. The style also features angled and zippered front welt pockets, rear welt pockets and a zip front. Kate’s trousers were originally $69.95 in the US, most recently selling for $29.99. In the UK the slacks were initially priced at £44.95 but then discounted to £21.99; the style remains available in limited petite and standard sizes on the UK site.

This is a basic style for the Gap, offered in a variety of sizes (petite, tall & standard), colors and prints. The trousers are made by women who are part of Gap’s P.A.C.E. program, an “education program that gives women the skills and confidence to change their lives,” benefitting women who make Gap products in 7 countries around the world. One FYI if shopping online today: in the US Gap is promoting 40% off your purchase with promo code SHINEON. In the UK the offer is 20% off with promo code FRESHGAP.  Both offers end today, I’m sure to be replaced by a Labor Day promotion in at least the US.

We saw the return of a piece Kate favors, her Smythe One Button Blazer. The jacket is 100% wool with a fitted design, notched lapels, a welt pocket at the bust and two patch pockets at the hips. It remains available in all sizes at Shopbop ($595).

This photo from Richard Palmer better shows the signature design element of the piece, its distinctive cutout portion on the back. Kate has worn ikat prints before. Below you see her in the Patrice dress by Diane von Furstenberg, worn for a visit to Australia’s Blue Mountains in 2014. A closer look at the two patterns, with the Patrice on the left and the Gap on the right. . UPDATE 11PM FRIDAY:  A photo shared on Twitter by Kate MiddletonUS shows the back of Kate’s top without the jacket, and it looks like the H&M piece suggested earlier on Twitter by Viviana, who owns the item. (I can’t find the photo to license via any of the agencies I use or I would post it here, this link takes you to the picture on Twitter.) It appears to be the H&M Off the Shoulder Rib-Knit Top. I thought the neckline trim was different in pictures shared on Twitter, but looking at these product shots it certainly seems to look like Kate’s. The H&M garment is a rayon/nylon/spandex blend that was originally priced at $34.95 but is now on sale for $15. As of t very early Saturday morning the top is available in all sizes online. Thanks to Christin (@PackhamGown on Twitter), Kate MiddletonUS, What Would Kate Do, Anna of My Small Obsessions and MiddletonMaven for their efforts on this one.

The Duchess carried her Natalie clutch by LK Bennett again. She also wore the Fleur Espadrille Wedges from UK retailer Monsoon that she had on yesterday. Kate changed from the Monsoon Fleur to her Sebago Balas once on Tresco Island. The style remains a standard style for Sebago; it is available in several sizes at Sebago ($95), as well as at Shoes.com ($94.95), and Amazon ($79 in very few sizes).

Here is one more look at the ensemble. And another view as Kate and William head home. Here is a quick Kensington Palace video of the pair arriving at the Tresco Abbey Garden.

The Duke and Duchess have arrived at the beautiful @TrescoGarden for their first stop in the Isles of Scilly. pic.twitter.com/pNMId9xNVa