Kate opted for a dress by American designer Lela Rose for today’s events in Cornwall with Prince William. This was the first of two days of engagements in the region. 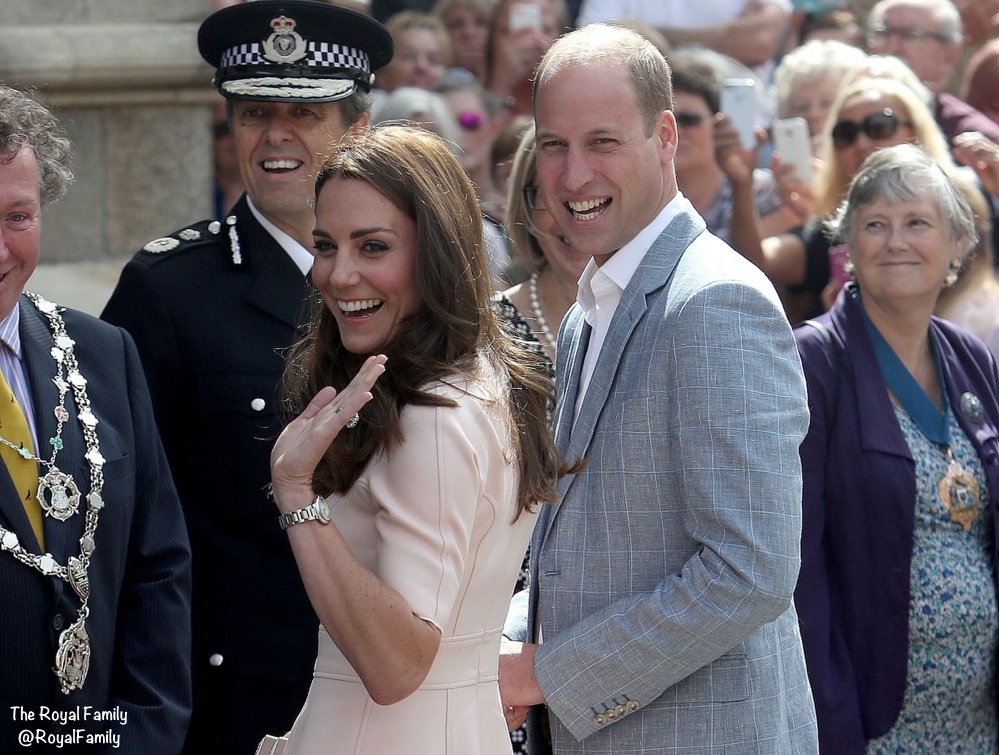 A large part of the visit will also introduce them to residents and projects on the Duchy of Cornwall estate – 53,000 hectares of land across 23 counties that was established in 1337 to fund the heir to the throne.

It was bright and sunny as the pair arrived at their first engagement.

William and Kate have arrived at zebs in Truro to meet young people pic.twitter.com/6v9Hd2PHru

Kate speaking with some of the children who had been waiting to see the royals in this photo from BBC Radio Cornwall. From Richard Palmer’s story in The Express:

They began their visit at Truro Cathedral this morning, where they were greeted by hundreds of cheering well-wishers lining the streets. So far the cathedral has raised around £650,000 and put 20,000 new slates in place.

One young man grew shy when the Duchess stopped to say hello. William and Kate were able to walk to their next function, it was just across the street. More from The Daily Mail:

Their next stop was Zebs Youth Centre, a drop-in centre which aims to inspire young people through creative activities such as recording music and taking photos.

Back to the story in The Express:

After they heard about a programme which helps young people build their CVs and encourages them in career opportunities, Kate, 34, asked: “Do any of you know what you would love to be? Do you have some aspirations?”

William, who after a period in the Household Cavalry switched to being an RAF search and rescue helicopter pilot combining his current part-time role as an air ambulance pilot with royal duties, cut in: “It is totally cool not to have that by the way. “It took me an awfully long time to work out what I wanted to be.”

The pair then journeyed to Healey’s Cornish Cyder Farm. Healey’s is a traditional brewery with its own orchards and production facilities, and Cornwall’s only distillery. The company is celebrating its 30th anniversary this year. It’s thirsty work touring the county but luckily there was some light refreshment for Prince William and Kate when they stopped off at Healeys Cornish Cyder Farm. The Duke and Duchess of Cambridge were at the farm for one of the most important days in its annual diary – to watch the press of the first apple harvest of the year.

A distinction between cider mills in Europe and those found in the US: in Europe cider/cyder refers to an alcoholic beverage, while in America it references a non-alcoholic drink. However, hard cider is enjoying a resurgence in popularity in the US and more orchards/mills are making the drink.

It appeared to be an enjoyable stop for Kate and William. The Duke and Duchess unveiled a marker commemorating their visit and the Healey’s anniversary. For anyone who might be wondering, Healey’s owners are direct descendants of Donald Healey of Austin-Healey auto renown. Several of the classic cars are on display at the Farm.

The next stop took Kate and William to two projects underway on Duchy property, Nansledan & Tregunnel Hill.  The developments are for both housing and commercial use. The Duke and Duchess were on hand to learn more about a charity called The Wave Project. The Project uses surfing to help young people cope with stress and anxiety. Kate chats with Alex Hutton, 12, & Dylan Bradley-Peer, 11, in this photo from Emily Andrews of The Sun. It looked like a very successful day of engagements for the duo. Now for a look at Kate’s Lela Rose dress.

The garment features many of the design elements Kate is fond of, including a fit and flare silhouette and exposed seaming. A closer look at some of the seam detail.

Kate accessorized with her Natalie clutch by LK Bennett.

And the Monsoon wedges we first saw in India.

The Pink Morganite Earrings are by Kiki McDonough. And the Duchess wore her Cartier Ballon Bleu watch. She also sported her Ray Ban sunglasses during part of the day. It is the folding Wayfarers, you can just see the seam where they bend in the center.

In the what William wore category (ahem), the Duke once again elected to bypass his usual navy suit for a more casual look. Here you see him chatting with 5-year-old Jaydon Mitchell Tomlinson. More from Victoria Murphy’s story in The Mirror:

Jaydon, who suffers from Cerebral Palsy and uses a wheelchair, had waited three hours to see the royal visitors with his mum Emma Mitchell.

She said: “He had been really frustrated because he couldn’t see them, but then William came over and talked to him about Star Wars.

“Jaydon said his favourite character is Darth Vader, because he’s a baddie, and William said he liked him as well. It was amazing for both of us.”

Tomorrow the couple is scheduled for multiple engagements on the Isles of Scilly. (More info about those events may be seen here.) This evening Kate and William will spend the night at Restormel Manor, a 500-year-old property owned by the Duchy.

We’ll leave you with this video from Emily Nash of Hello!

Love this video of Kate chatting to children on the beach at Newquay earlier! She was handed the roses by six-year-old Alexandra Pearson, who wore a princess dress for the occasion. Kate and William were on great form and admitted they were a bit jealous not to be joining in with the surfing. They were in Newquay to see the work of the @waveprojectuk, a surf therapy charity which helps young people overcome mental health problems by teaching them the sport.

Pirate FM’s coverage is here with some nifty photos