Prince William is Colonel of the Irish Guards. The annual ceremony was at the Irish Guards Calvary Barracks in Hounslow, West London. Kate receiving the basket of shamrocks she will distribute. Led by their mascot, the Irish Wolfhound Domhnall, the 450 1st Battalion Irish Guards marched onto the Parade Square at Cavalry Barracks.

Time to get ready for Domhnall! The Irish Guards mascot will lead out his @BritishArmy colleagues on their #stpatricksday parade. pic.twitter.com/fz0ysukJI7 She always seems to enjoy this event. As do the Guards. I believe these are formerly serving members of the Guards. Commemorating the day isn’t limited geographically; in this tweet from the British Army, you see soldiers from the Royal Irish Regiment in Kabul, Afghanistan, getting their shamrock sprigs last night (our time). 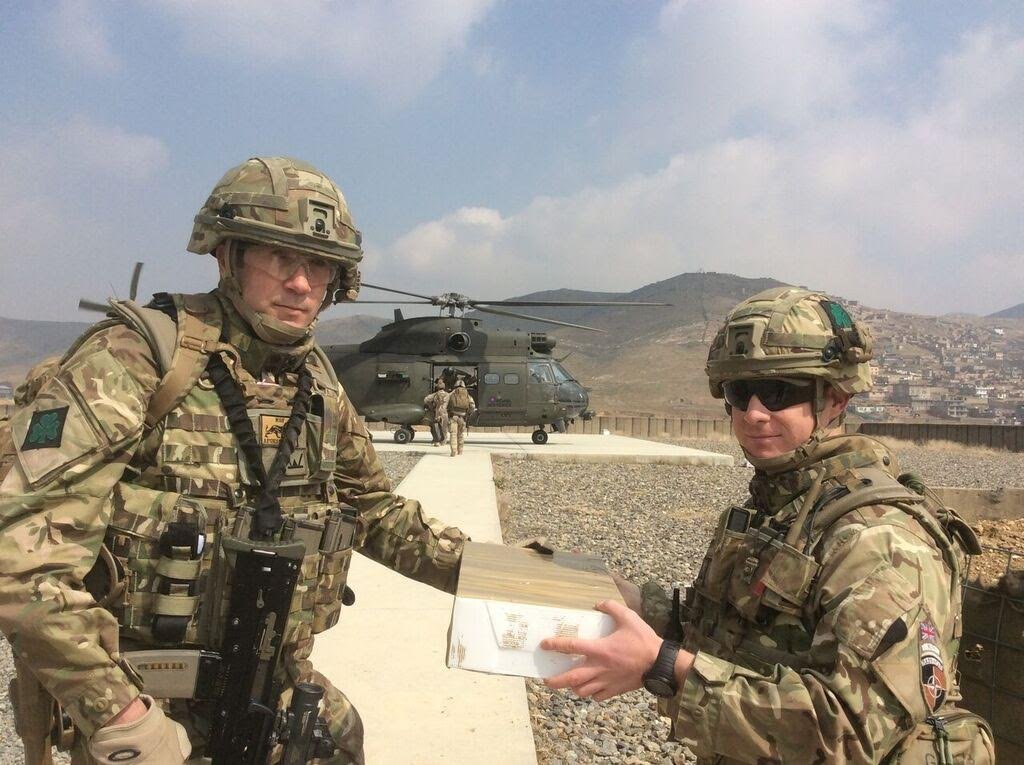 After the ceremony, the Duke and Duchess chatted with members of the Guards. And also spent time speaking with their families. The duo appeared to be enjoying themselves and joined others at the Barracks in toasting the day. A rousing toast to the Duke and Duchess.

Now to what Kate wore, starting with a new coat by royal favorite Catherine Walker. The double-breasted style looks like it might be done in a wool crepe, and appears to be modeled on the Catherine Walker style shown below, from the designer’s Red and Black Group. Many thanks to Christin for reminding me that style was one we included in a 2014 post about the Catherine Walker ensemble Kate wore when arriving in New Zealand.  I don’t believe Kate’s cuffs and pocket flaps are quite as long as those shown on the model, and Kate’s collar is closed a bit closer together than that seen below. Otherwise, it is quite similar. I like the way the goldtone buttons on today’s garment mirror those on the uniforms of the Irish Guards. It looks like the Duchess was in the ‘Rebecca’ style in a color called ‘Greenery.’ Made of kid suede, it features a pointed toe and 4.5″ heel. It retails for $545.

A closer look at the Duchess’s hat. Our thanks to Lindsey on the Facebook page, she pointed out that it was the same hat worn on Christmas Day 2015. That was a Sylvia Fletcher for Lock & Co. design. You can see in these photos the point at the front has been rounded. UPDATE: It turns out that Kate’s handbag is by Etui; credit for the ID goes to a lovely WKWer who would like to remain anonymous.  More details, almost verbatim from our Paris arrival post on Saturday, that is where we first published the information. (I completely forgot to update this post, aarrgghh!)  Below left you see Kate holding her bag; in the center, a photo shared by our anonymous WKW friend, and another shot of Kate’s on the right.

Etui is based in Poland. Anna of My Small Obsessions was of vital help; she lives in Poland and was able to correspond with Etui. The company confirmed Kate was carrying one of their bags; you can see how excited they were at the news in their Instagram post. They have also joined Twitter; click here to visit their feed. At one point the brand was carried by Topshop, as well as Peter Jones & John Lewis. According to our tipster, the bags are very reasonably priced; the one she has that appears to be Kate’s version was £50. We should have a better photo of Kate’s bag in the next day or so. Etui does not currently have an e-commerce site, but the bags can be purchased by directly contacting the company via its Facebook page. Several WKW friends report the company has been very helpful when contacted via its Facebook page.

We saw the return of the Monica Vinader ‘Siren’ earrings in green onyx ($195). And the Cartier shamrock brooch loaned to royal family members for ebgagements with the Guards. Kate wore her hair up, using a hairnet to keep it in place. A look at Kate’s ensembles over the years. One other item of note of interest: PopSugar posted a video of Kate as Eliza Doolittle in her school’s production of My Fair Lady. I knew there had been photos of the production, but didn’t realize there was a full-length video of her performing “Wouldn’t it be Loverly?” We’ll see you shortly for the Duke & Duchess’s arrival in Paris.

I think this is far and away her best St. Patrick's Day look yet! This coat is much more striking and stylish that the ones she has worn in the past.

She looks fabulous. Time for a pair of emerald earrings or tourmaline with some little diamonds! Or some great gold earrngs.

Perfectly fits into the overall setting.And to my foreign eyes a very British kind of elegance, which I associate a lot with traditional tailoring, which of course has always worked particularly well in menswear.Her coat looks flawlessly tailored.Good tailoring is all about the perfect fit, basically adjusting to the individual body of the wearer. Now her signature sillhuette for official daytime events seems to be a fitted bodice and a flared knee-length skirt.It's nice when her naturally athletic shoulders get some definition.The effect is 1940s especially with the sombre colour scheme.There was also a fashionable focus on hats.Womenswear was quite chic during the war years, because signaling strength was suddenly desirable in fashion.It works well for formal no -nonsense occasions like this.

The bag is by Polish brand ETUI available at Topshop Oxford St.

This coat is exquisite, and Kate looks absolutely fabulous!!!