Kate in Catherine Walker at Wimbledon 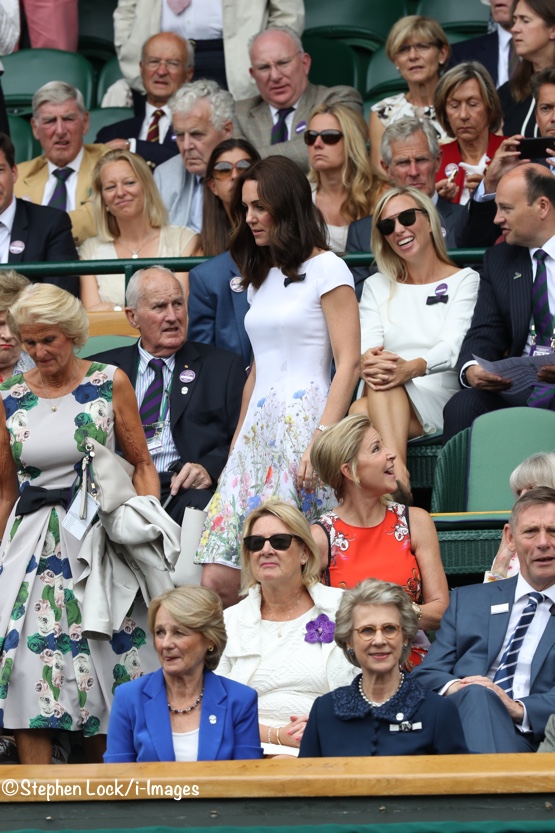 A better view of the dress. Here you see Kate and William with Philip Brook, chairman of the AELTC, and Gill Brook. (The AELTC is the All England Lawn Tennis and Croquet Club.) It was a banner day for people watching at the All England Club. Below, Eddie Redmayne (l) and Bradley Cooper (r). Also on hand for the championship: London Mayor Sadiq Khan and Prime Minister Theresa May. Other royals watching the match included Princess Alexandra and the Duke of Kent (below); the Duke is President of the All England Club. Switzerland’s Roger Federer took on Marin Čilić of Croatia for the championship. Local favorite and last year’s champion, Andy Murray, was eliminated in the quarterfinal by American Sam Querry. Mr. Federer was victorious, taking his 8th Wimbledon trophy. From The Daily Telegraph:

In the end, an ace clinched Federer’s 6-3, 6-1, 6-4 victory in 1hr 41min. It was the first time Federer had won Wimbledon without dropping a set, and only the second time anyone had done so in the Open era, after Bjorn Borg in 1976. And from The Wall Street Journal:

LONDON—In the end, perhaps as it should have been, it was more of a coronation than a competition as Roger Federer dismantled Marin Cilic to win his 19th Grand Slam title with England’s future king watching from Centre Court’s royal box.

He is the oldest man to win the Gentlemen’s Singles title in the Open era (which started in 1968); this is his 19th Grand Slam win as well. Some of the happiest people in the audience: Mr. Federer’s wife, Mirka, and the couple’s two sets of twins, and Mr. Federer’s mother, Lynette. The Duke of Kent presenting the trophy. One other Wimbledon note: yesterday a Polish team took 1st Place in the Gentlemen’s Doubles final. Of course, we’ll see the Cambridge family in Poland tomorrow.

Now to what Kate wore for today’s match. She was in a Catherine Walker dress with a white bodice and botanical print on the skirt. Today we have an enormous Tip of the Tiara to Laura, aka ParkysGirl79 on Instagram, she discovered this image showing the print on a different frock. The dress was worn in sync with the Chelsea Flower Show as part of the annual Chelsea in Bloom event. That event uses the Flower Show as a theme, showcasing decorated stores and fashions shows with splendid floral displays. Some may recall this year’s Flower Show post, when we featured Kiki McDonough’s store decor.

I believe the pattern is called Fleurs Sauvages, or “Wildflowers.” 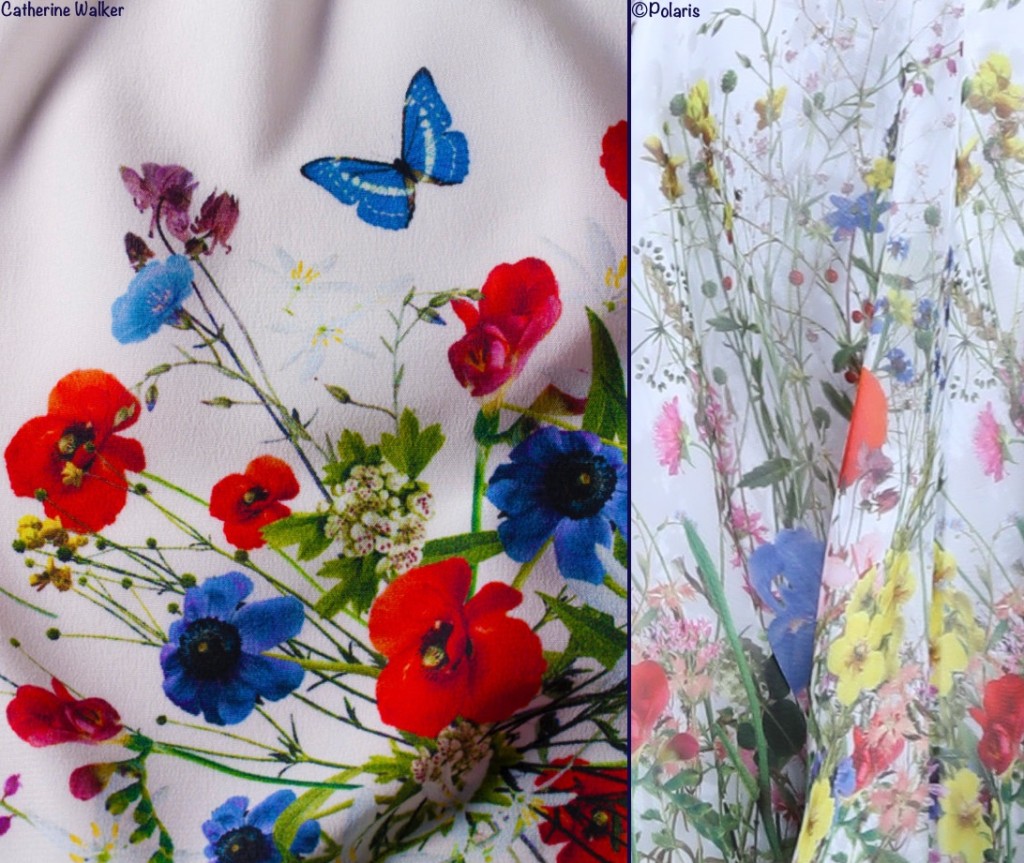 The print is currently available on a Catherine Walker silk scarf (£295). It is an interesting choice. Catherine Walker remains a likely designer for one or more styles that Kate could wear on the tour starting tomorrow. And the print features poppies; Poland’s national flower is a poppy.

Kate’s version is bespoke, but you can see the similar elements. Sarah of The Royals and I on Twitter shared this photo by Easigrass, it does show Kate’s feet, although they are a bit blurred.

There have also been some screen grabs posted on the WKW Facebook page, as well as suggestions for what style the shoe might be, ranging from Stuart Weitzman to LK Bennett. We saw the return of the Duchess’s Cassandra Goad Temple of Heaven earrings. As well as her trusty Ballon Bleu watch by Cartier. A number of people wondered about the purple and green grosgrain ribbon Kate was wearing. With thanks to Cepe Smith on Twitter, it turns out the 375 members of the AELTC may wear the ribbon/bow. This is the first time I recall seeing Kate wearing it, presumably as Patron of Wimbledon she is also a member.

We leave you with this video of Roger Federer being congratulated by his wife Mika, the Duke and Duchess, his father, and others.

Hugs, kisses and handshakes from royalty and the family for the #Wimbledon champion… pic.twitter.com/wxpTxn8w6i

NOTE: we will be publishing a separate post this afternoon with detailed info for you on the tour.