The Duchess was in a new coat for Christmas at Sandringham today. 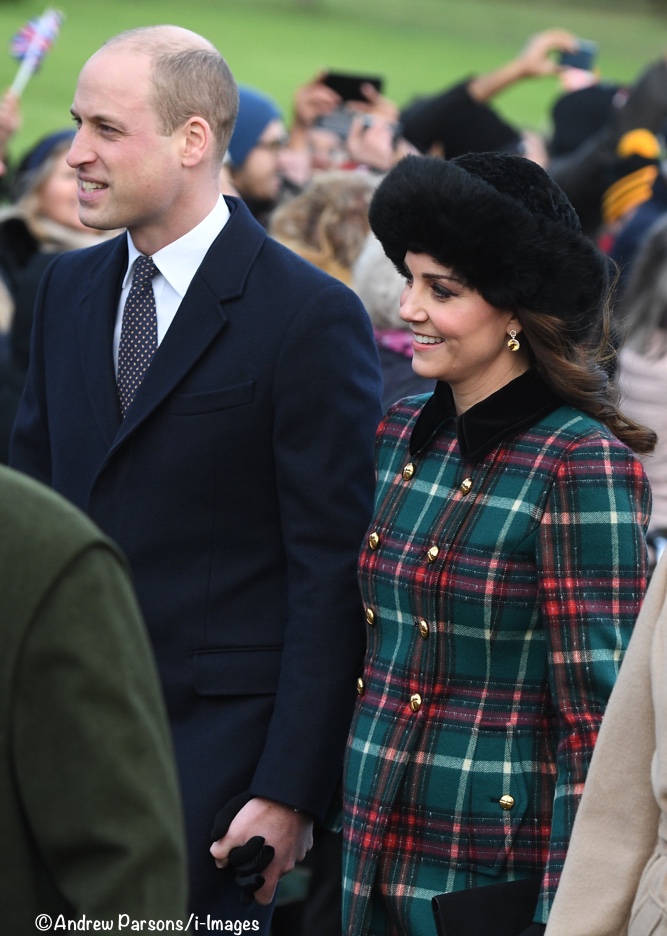 Here is a quick video from ITV of the Royals on their way to services.

Meghan Markle has joined the Royal Family for their traditional Christmas Day service at the Queen’s Sandringham estate https://t.co/lr5FZdSp7X pic.twitter.com/HgWDCARNmJ

Kate and William joined HM, Prince Philip, and many other royal family members at the church of St. Mary Magdalene. Also among those attending, Prince Harry’s fiancée, Meghan Markle. Below you see the couple along with Kate and William; Meghan was wearing a Sentaler wrap coat and Stuart Weitzman boots. More about today’s service from The Daily Mail:

The service began with the National Anthem and was followed by carols including O Little Town Of Bethlehem, Hark! The Herald Angels Sing, Angels From The Realms Of Glory and O Come All Ye Faithful. Afterwards the younger royals headed towards the crowds to collect flowers and gifts.

We’ve had several comments about the Queen’s ensemble. Here you see HM and the Duke of Edinburgh just after the service. I included a small inset of HM’s brooch. Bows and curtsies for the Queen as HM departs after the service. Following the service family members chatted with those gathered near the church; many brought flowers or other gifts for the Royals. Here is a quick video Francesca shared on Twitter.

‘Everyone needs to get home for a cup of tea I think’ ??☕️ #Sandringham #KateMiddleton pic.twitter.com/TzTn2jec3K

NOTE: The videos in today’s post are playing for some readers and not for others. It doesn’t seem to be a device or brand-specific issue, so I don’t know of a good way to correct the problem. (Insert sad face here.)

Now for our look at what Kate wore for today’s church service. It is a wool/alpaca blend with classic double-breasted styling, velvet collar, back belt and inverted pleat, vertical front pockets with oversized tabs and domed gold buttons. The coat is sold out on Net-a-Porter’s US site, but still available in limited sizing on the UK site (£2655, about $3500 at today’s exchange rates). This offers a view of the button detailing inside the back pleat, as well as a closer look at the fabric. Our thanks to Melissa Reid and Kate’s Closet for today’s coat ID.

And she wore her Tod’s pumps.

UPDATE: savvy ID expert Kate Johnson shared on the Facebook page that Kate appears to be wearing another Lacorine alpaca hat. Thanks also to Olga who suggested in a comment that Kate could be wearing this hat. This is the brand’s Sumac style in black. Below, another view. Kate has previously worn Lacorine; below you see her wearing the silver-grey Sumac style at Sandringham in January. UPDATE DEC 27: In a post on its Instagram page, Peruvian Connection says the Duchess is wearing one of its hat, the Vallnord style, also made of alpaca fur. In the montage below you see the Vallnord in the center.

I have sent an email to Peruvian Connection to ask for their input.

UPDATE #2 DEC 28: Lacorine has emailed to say that after speaking with Lock & Co., where Kate purchased the grey Sumac worn above, they cannot confirm the hat worn Monday is theirs. Peruvian Connection has not responded to my email. At this point, I am unclear as to whose hat Kate wore on Monday.

The Duchess also wore gloves today, I believe they are her Cornelia James ‘Imogen’ pair. UPDATE: Cornelia James verifies that Kate is wearing their gloves, the Alice style in merino wool with a velvet bow at the wrist.

UPDATE: A friend has gotten in touch and shared a photo that shows Kate is wearing the Alice glove by Cornelia James.

Kate also had on earrings by Kiki McDonough. The upper portion appears to be the Diamond Flower style, while the drops look like citrines bordered in diamonds. UPDATE: With thanks to Iva, these are not new earrings, they were worn for a 2016 garden party in Northern Ireland. Here you see the Duchess today and at the garden party. We’ve also had comments about the look worn by Sophie, the Countess of Wessex. Anna of My Small Obsessions and the Countess of Wessex blog noted on Twitter that she was in an Erdem coat, a Jane Taylor hat and she carried a Noble Macmillan Tassel Pouch. Below right I included an Erdem dress at Matches Fashion in what looks like the same material. Here is a look at Kate’s Christmas Day ensembles over the years.

We’ll leave you with the BBC’s story about the royal family attending today’s services.

Prince Harry and Meghan Markle, together with the Queen and other senior members of the Royal Family, arrive for Christmas Day church service at Sandringham https://t.co/TE455ryES1 pic.twitter.com/TPurtyspBs

One note on comments: while recognizing this is not a Meghan blog, there are going to be times like today when content naturally includes Meghan. I do not have an issue with comments about Meghan as long as the primary focus remains on Kate and there is no pitting of the two against each other. (Something many of the mainstream media seems incapable of avoiding. Two different women with different backgrounds and different style. Grrr.)

We’ll update with more info and photos as soon as we have time. (We’re slated to head out of town but are buried in snow, so we may be back here sooner than expected.) Merry Christmas! Susan, I hope you had a wonderful Christmas and wishing you a very Happy New Year!

I thought Kate's coat was beautiful and both festive and appropriate for Christmas. While the hat may not have been something I would have thought to pair with the dress, she certainly was able to pull it off. Overall, a very lovely look.

I like this look on her, especially at Christmas - very put together. And she is positively glowing with happiness! Giddy isn't the right word, but clearly relaxed and happy. Not too keen on what others wore, with the exception of Autumn Phillips. I could see Kate in something similar. Thanks for the coverage. Happy New Year to all.

Can anyone recommend a brand of tights like Kate's that are matte? I have had an impossible time finding any in the U.S. Many thanks in advance!

I know Wolford does a number of matte black styles. The downside is that they are expensive. I have actually purchased some at Target that have been great; I think it was their house brand. H&M also show matte black styles online, I've not seen them in person though. :)

The Duchess’s Christmas Day outfit is the one I look forward to the most and for me, she certainly didn’t disappoint this year. I adore the coat and would absolutely pair it up with all black accessories like Kate did. I totally understand that some readers may think it’s all slightly frumpy but this is the sort of clothing that country folk wear. Meghan looks great - very glamorous.

Susan, per what you have written before, you are not going to do a style blog about Meghan Markle, and you will continue with this blog about the Duchess of Cambridge (Great!) If this is still the case, may I ask you to please not publish comments comparing Kate with MM in any way? It is so annoying! People simply do not get it. Kate and MM are two completely different women with completely different fashion styles, and anyway, they are not competing with each other. This so-called "competition" has been maneuvered by the media, and some people just cannot step away from this nonsense. There are many fashion blogs solely dedicated to MM, so all those who want to comment about her should do so in those blogs, not in this one. I know that when Kate and MM are together, those photos should appear in this blog, but that is all. Comments regarding who looked better dressed, styled, younger, etc. should not be published in this blog at all. Thank you Susan.

I am a bit torn with this. Of course, I’d rather not see comments pitting the two against one another. However, when they are both at the same event, it makes sense to comment on anyone in the picture. I see many comments about Sophie, the Queen, and others in the photos. Perhaps we can all try to avoid being too sensitive. When a comment is made about Sophie, it’s no big deal, but when someone makes any comment (positive or negative) about Meghan, it is an inflammatory comparison. I just don’t agree. Let’s all take a deep breath and realize it’s ok to comment on anyone in the photo.