There were dual Duchesses at the All England Club today, as the Duchess of Sussex made her first appearance as a royal at the event.

Another view of Kate. You also see Gill Brook (in pink) in the photos, wife of the club chairman. The Duchess of Cambridge and Duchess of Sussex were greeted by cheers as the arrived at Wimbledon.

Kate and Meghan, who are conducting their first engagement together without their husbands, stopped and spoke with a number of ball boys and ball girls, as well as junior players before making their way across the walkway for lunch.

When they passed across the bridge, crowds gathered below cheered and took pictures, as Meghan waved warmly in acknowledgment. Here is a video showing the duo as they arrived.

An occasion fit for royalty.

The Duchess of Cambridge and the Duchess of Sussex are here to enjoy ladies’ finals day…#Wimbledon @KensingtonRoyal pic.twitter.com/BhoHctaZiD

Here you see both Kate and Meghan speaking with the 11-year-old. Tia was selected to do the coin toss for the Ladies match. She is representing the Royal Air Force and the RAF Benevolent Fund. More from a Fund news release:

Tia’s father Wayne serves in the RAF at RAF Brize Norton, as did her mother Joyce, who passed away suddenly in November last year. The Duchess is royal patron of the All England Lawn Tennis and Croquet Club, host of the Championships.

It was another full house.

Both were in bright, summery looks. All were on hand to see Serena Williams, a close friend of Meghan’s, play Germany’s Angelique Kerber. More from the NY Times:

Williams, 36, was playing only her fourth tournament on tour after giving birth to her daughter, Alexis Olympia Ohanian Jr., on Sept. 1, 2017. She has said throughout the past two weeks that she did not need to win the title here, that she was trying only to prove she was back.

Williams had played — and won — the 2017 Australian Open while two months pregnant, but she did not play again on tour until 13 months later. She suffered severe complications after her cesarean section, including a pulmonary embolism, a medical problem she has experienced in the past

But before that play could get underway on Centre Court, the semi-final match started yesterday between Rafael Nadal and Novak Djokovic had to be completed.

Settle in for this one…

Rafael Nadal and Novak Djokovic pick up where they left off last night, with the Spaniard holding for a 1-0 lead in the fourth set after a 16-minute game 😲 pic.twitter.com/LdKsHPAQod

It was a grueling match.

The temperature was above 80°, and it was humid.

It took almost two and a half hours to finish the match, with Mr. Djokovic advancing to tomorrow’s final, a match the Duchess will attend with Prince William.

And then it was time for the Ladies Final to get underway. And time for Tia’s coin toss. Kate and Meghan looked like they were very much enjoying themselves. And also enjoying the tennis. You could do almost an entire post on their facial expressions. Some would be ideal for caption contests. Now to what Kate wore, a bespoke piece by Jenny Packham. The dress is done in a print that almost looks like tennis balls. It is midi length, with a straight silhouette, and features gathers at the waist and shoulder. Some found it reminiscent of the Dolce and Gabbana dress Kate wore last year at Wimbledon.

We saw the Duchess carrying a new (to us) bag by Dolce and Gabbana, the Miss Sicily style. The bag is made of calfskin and measures roughly 10″ x 8″ 4.5″. The color is called ‘rose pink,’ and the piece can be carried over the shoulder using the detachable shoulder strap. We show it at My Theresa ($1695); it is also available at SSense ($1695). Our thanks to HeavenQRF for her quick ID of Kate’s bag.

Many recognized Kate’s shoes immediately, the Gianvito Rossi pumps in ‘praline’ suede ($675) We show them at Saks where they are offered in a mix of sizes, and also at My Theresa, where there is a very limited selection of sizes ($675).

Kate’s earrings are a pair first seen in Sweden during the January tour, the Baroque Pearl Drop Earrings ($152) by In2Design. The Duchess was sporting a new pair of sunglasses.
Embed from Getty Images

They look like the Ray-Ban New Rubber Youngster style in gradient brown, according to Middleton Maven on Twitter.

The style features a square lens in a matte rubber frame; the lenses are non-polarized. We show the style at Shopbop ($143); it looks like they are also available at Amazon ($143). More on today’s styles from The Daily Telegraph:

I doubt that the Duchesses discussed their outfits beforehand, and they certainly didn’t look a matching pair. But why should they? Both looked elegant and appropriate, in line with what is expected of a Duchess. Both have shown a keen interest in fashion, and have sparked fashion trends and caused business to boom for the brands they wear. It just so happens that their taste in clothes isn’t the same – and wouldn’t it be boring if it was? 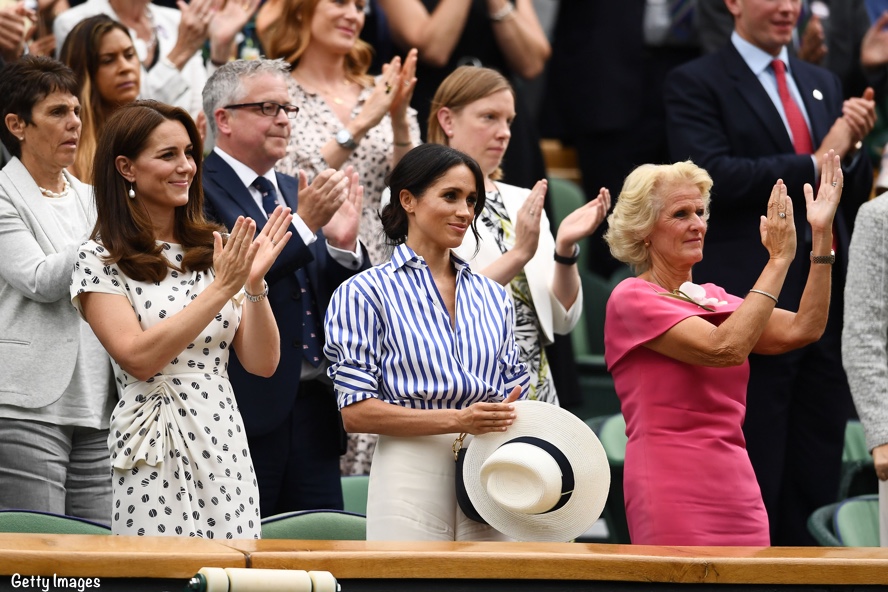 This link will take you to a 5-minute video of Kate and Meghan at Wimbledon today.

UPDATE: Today was not the day for Serena Williams to win another Grand Slam tournament. Ms. Kerber won the match in straight sets. It was her first Wimbledon Championship in Ladies’ Singles and third Grand Slam win.

The Duchess congratulating the new champion.

A royal reception for the newly-crowned #Wimbledon champion, @AngeliqueKerber… pic.twitter.com/Iixv1g0r6m

Reaction from Ms. Kerber via ESPN:

“I knew that I had to play my best tennis against a champion like Serena,” Kerber said.

Now she just needs to win the French Open to complete the career Grand Slam.

….her voice quivered with emotion after her pursuit of a 24thGrand Slam title and eighth Wimbledon championship was denied, 6-3, 6-3, by the hard-hitting precision of Germany’s Angelique Kerber.

“To all the moms out there, I was playing for you today. And I tried,” said Williams, 36, just 10 months after a difficult childbirth that was followed by grave medical complications. “Angelique played really well.”

This video shows Kate and Meghan as they leave Wimbledon.

Meghan and Kate have just left @Wimbledon (in separate cars). I’m told that Meghan was able to spend a little time with @serenawilliams (who told reporters she’ll be spending this evening watching a movie at home with husband @alexisohanian). pic.twitter.com/WKbKSkT5Tq

For our post looking at all of the designs worn by Kate to Wimbledon, click here. For details on What Meghan Wore, visit our sister site here.

We’ll see you tomorrow when Kate and William watch the Gentlemen’s Final.