The Duke and Duchess attended tonight’s Festival of Remembrance at Royal Albert Hall. 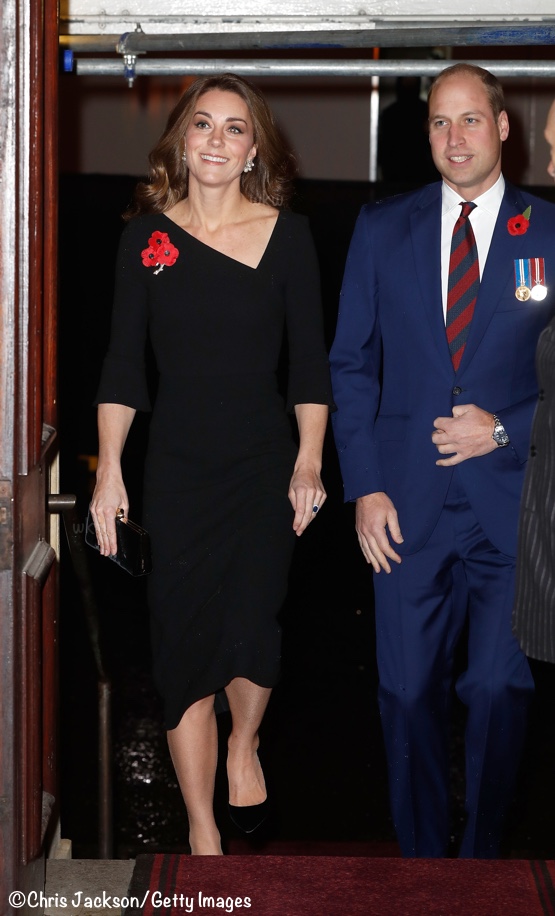 The Festival is put on by the Royal British Legion. HM has been the organization’s patron for more than 65 years. Edward and Sophie, the Earl and Countess of Wessex.

The Duke and Duchess of Sussex. The Duchess of Cornwall. Most senior royals were in attendance this evening. More about the event via the Royal Albert Hall website:

The Festival of Remembrance, held in honour of those who have given their lives in the service of their country, has been marked at the Royal Albert Hall annually since 1923.

This playbill is from the very first Festival, held in 1923.

Prime Minister Theresa May and her husband, Philip. They gave a standing ovation to welcome the Chelsea Pensioners and as bereaved family members walked on to the stage. Rows of poppies adorned the room and were projected on to the floor.

The family members, led by Des and Maureen Feely, whose daughter Corporal Sarah Bryant was killed in Afghanistan in 2008 at age 26. From the BBC’s coverage:

The royals stood as thousands of people in the audience held up photos of World War One soldiers – including Mrs May and husband Philip who held pictures of two of her ancestors. This is always a moving, often poignant event (at least for me). This year it is especially so, as we mark the Centenary of the Armistice ending World War I. There have been events all week commemorating the anniversary. Below, the Torch of Remembrance is brought into the hall and onstage this evening. Sir Tom Jones was one of the first performers. Toward the end of the program, the Last Post is played. Two minutes of silence is observed. There is a release of poppy petals from the roof and a two minute silence to commemorate and honour all those who have lost their lives in conflicts. After a blessing, everyone stands for the National Anthem.  Serving military personnel give a rousing three cheers for the Queen. And the program concludes.

This video is from the show’s finale after the poppies have rained down upon performers and those in the audience.

The poppies bloomed and rained down on tonight’s Festival of Remembrance in the Albert Hall as all 3 services gathered to remember the fallen @BritishArmy @Householddiv #FestivalofRememberance pic.twitter.com/bOCCShsmlZ

🎥 As part of the #FestivalofRemembrance, The Duke of Cambridge, Patron of the @DNRCOfficial Appeal, shares the story of the new National Defence and Rehabilitation Centre – which has been supported by the @PoppyLegion. pic.twitter.com/d5RCCxq6pg

As great a disconnect as it seems, we’ll briefly look at what Kate wore for this year’s Festival. It is made of a wool/stretch silk blend (which sounds very comfortable!) and it features a fitted bodice, elbow-length sleeves with a belled cuff, and an exposed back zipper. The dress looks like it may have been exclusive to Farfetch, and it is sold out. Thank you to Heaven and also Michelle for their ID of the dress.

Kate had on new (to us) earrings this evening. With thanks to Laura for her ace detective work, they are on loan from HM. They come from a set called the Qatar Pearl and Diamond Demi-Parure; as ever, we learn more from Her Majesty’s Jewel Vault:

The earrings each have a group of diamonds on top of a group of pearls.

The demi-parure was a gift to the Queen from Sheikh Khalifa bin Hamad Al Thani, the Emir of Qatar, during her 1979 visit to the country and she wore it during the trip (above, left).

UPDATE NOV 29: It’s possible Kate wore a different pair of earrings, not the Queen’s pair. One suggestion is the Pearl and Crystal Earrings ($68) by J Crew. A reader named Laura made this suggestion to both Charlotte at HRH Duchess Kate and Elizabeth at Kate’s Closet, and they really do look similar. We won’t really know until Kate wears them again and we have a better view of them. Kate wore three poppies this evening. Kate’s brooch also appears to be on loan from the Queen, a piece first seen in July 2017 at services in Belgium commemorating the 100th anniversary of the Battle of Passchendaele. A closer look at Kate’s poppies atop the brooch alongside a closeup of the piece’s stem.

A look at the full-size brooch.

More about the piece from the Royal Order of Splendor:

Many thanks to the Royal Watcher for her suggestion this was what Kate was wearing. There are often questions about why a certain number of poppies are worn. To the best of my knowledge, no member of the Royal Family has ever spoken publicly about the reasons they elect to wear any number of poppies at a given event. As we learned last week when the Duchess visited the Imperial War Museum, she had three great-great uncles who were killed in the Great War. That could be the significance behind the choice of three poppies, or it could be something entirely different.

It looked like Kate was carrying a Jimmy Choo clutch, the Celeste style in black velvet. The bag measures 8″ x 4″ and comes with an optional chain allowing you to carry it as a shoulder bag.

Many thanks to Michelle for the handbag identification.

The Duchess appeared to be wearing Jimmy Choo Romy 100 heels in black velvet.

The style is a classic point-toe pump with a stiletto heel measuring just a bit less than 4″. The style is available as a made to order item ($895) We will see you tomorrow for the Remembrance Sunday service. Here are details on the times.

There is also tomorrow night’s special service at Westminster Abbey, “to give thanks for peace and those who returned.”