The Duchess wore a dress we’ve previously seen for her engagement at Bletchley Park today. Kate was there to see a special exhibition ahead of the 75th D-Day anniversary in June. 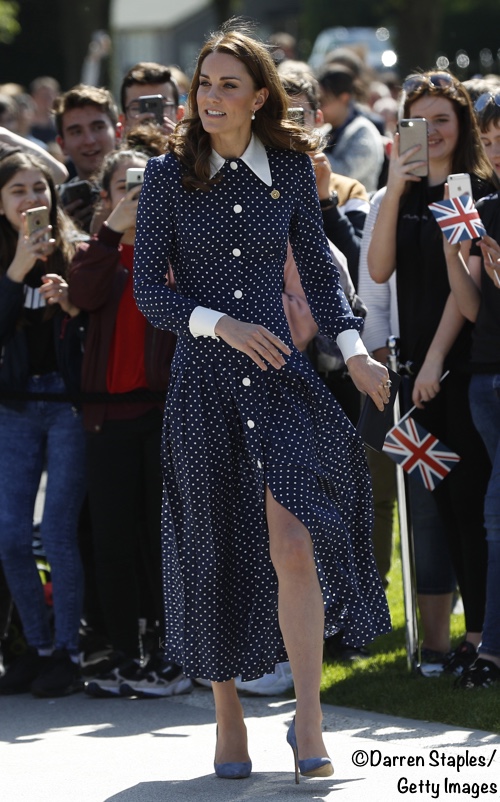 Below you see her chatting with students as she arrived. Bletchley Park is the historical site where WWII codebreakers worked on deciphering hundreds of thousands of enemy messages, intercepted at secret listening posts. The facility was part of the government’s Code and Cypher School. There are seventy additional structures on the property.

Today The Duchess of Cambridge is visiting @BletchleyPark to view a special D-Day exhibition in the newly restored Teleprinter Building, marking the 75th anniversary of the D-Day landings. pic.twitter.com/a5QyqgIiXF

The Duchess first visited Bletchley Park in June 2014, when she learned more about the work done there by her grandmother, Valerie Glassborow, and twin sister Mary. From the Bletchley Park website: “Miss Glassborow worked in the newly restored Hut 6 (later named Hut 16) alongside her twin sister, Mary Glassborow. Both were Foreign Office Civilians in the Cover Management Y section, which managed the interception of enemy signals for decryption at Bletchley Park.” Below, Kate’s grandmother, Valerie Glassborow. There was a surprise for Kate today; she was shown inscribed bricks honoring her grandmother and great aunt for their contributions. A closer look at the Codebreakers Wall. UPDATE: Some of us wondered about the Middleton name being used on both bricks. With thanks to BlondieBlueEye and Elizabeth for their comments, it turns out both Glassborow twins married Middleton men. Valerie Glassborow married Peter Middleton in 1946 and Mary wed his brother Anthony in 1947.

Kate met students from Akeley Wood school, and they tried their hands at codebreaking. Kate spoke with the students about the work done during the war; more from the Daily Telegraph:

“It’s quite interesting how you’re all learning about coding at school, and now you can look back at how it first started,” she said.

“At the time, they couldn’t talk about it could they?” she told Year Six pupils from Akeley Wood Primary School in Milton Keynes.

“My granny and her sister worked here. It’s very cool. When she was alive sadly she could never talk about it. She was so sworn to secrecy that she never felt able to tell us.” The Duchess with one of the students learning about the codebreaking process. The Telegraph reports that “Audrey Mather, a former teleprinter operator, told her: “We haven’t got together like this before. We don’t know each other even though we were here at the same time.” More from The Daily Mail’s coverage:

The four veterans, who all wore pins in recognition of their service to Bletchley Park, spoke to the duchess about what they remembered from their time gathering intelligence in the build-up to D-Day.

Kate also spoke with the veterans about “letting their hair down” after they had finished their shifts. Back to The Telegraph’s coverage:

“It’s lovely that it’s being celebrated,” she said of their work featured in the new exhibition in the restored Teleprinter Building. “It’s super important. I was just speaking to the children next door and they were saying this [codebreaking task] is really complicated.

“They have got a real appreciation of what you were doing.”

As mentioned near the top of the post, Kate was at Bletchley Park to learn more about a new exhibit that opened in April, “D-Day: Interception, Intelligence, Invasion.” As the 75th anniversary of D-Day nears, Bletchley Park Teleprinter is hosting a special exhibit based on newly declassified material, which shows how the intelligence effort coordinated at the center helped in the success of the D-Day landings at Normandy, France. Using sophisticated codebreaking techniques, workers at Bletchley Park supplied  information to the American and British led forces in the weeks leading up to D-Day on 6th June 1944.

It includes an immersive film, based on newly declassified material, which shows how the intelligence effort coordinated at Bletchley Park helped specifically in the success of the D-Day landings at Normandy. Lawson Bischoff, who is five, gave Kate a flower posy. Lawson was heard saying that meeting the duchess as “the best,” and that he felt happy after she thanked him for her flowers. Several readers have already commented about Lawson, and I thought he was beyond darling, so I am adding another photo of the youngster. The caption reads, “Lawson Bischoff fools around as he waits to present Catherine, Duchess of Cambridge, with flowers…”. Kate greeting well-wishers as she was leaving this afternoon. Now for our look at what Kate wore for today’s engagement, the Pleated Polka-Dot Silk Crepe de Chine Midi Dress by Alessandra Rich. From the designer’s Spring ’18 collection, the Net-a-Porter description notes the piece was “…inspired by Alfred Eisenstaedt’s 1945 photograph of a sailor kissing a stranger in Times Square,”  so it is certainly a nod to the time frame when Bletchley Park was in operation. The dress is silk with a cotton/silk lining, and it features a spread collar, pleated skirt, and contrasting cuffs. It also has a drop waist with pleats.

We first saw Kate in the piece when the official 70th birthday photos of Prince Charles were released in early November. It was a popular piece, worn by actress Abigail Spencer to last May’s royal wedding; it was also seen on Sarah Jessica Parker, Ivanka Trump, and Daisy Ridley.

I received a couple of emails noting a similarity to a dress worn by Diana, Princess of Wales, in October 1985. There are a few design elements that are similar (large, white collar; navy polka dot fabric; full skirt) I doubt the Duchess was referencing the dress worn by Diana. (And I say this as someone who believes Kate has worn garments meant as an homage to her late mother-in-law.)

There were a few questions about the Alessandra Rich dress worn by Pippa Matthews to the christening of Prince Louis. It is quite similar, but the waist/bodice section is different. You can see the bodice of Pippa’s dress is like the Alessandra Rich dress shown below. From the Spring ’19 collection, the piece is slightly similar to Kate’s dress. Called the Polka Dot Silk Georgette Maxi Dress ($2125), it is a darker navy blue with a larger size polka dot print, crystal buttons, and an asymmetric hem. The Duchess was in a new pair of shoes, the Rebecca style she favors by Emmy London, in a color called Riviera ($540). It is described as a blue-grey suede that is a new addition to the Emmy London collection. The shoe is a classic point-toe style with a 4.5″ stiletto heel. Our thanks to Lauren and also Laura for their speedy identification on the shoes.

Kate wore a brooch we’d not seen previously. Teas and Tiaras suggested on Twitter that it is similar to the rotors used in the codebreaking machines. The four veterans with whom Kate spoke wore similar pins.

It turns out the brooch belonged to Kate’s grandmother. I don’t *know* that it is from one of the machines Miss Glassborow used when working at Bletchley Park, but it would certainly make sense. Here is a closer look. With thanks to Jenny for her Facebook messages with info, this is the pin issued for surviving veterans who worked at Bletchley Park. The Bletchley Park commemorative badge is issued by the GCHQ (Government Communications Headquarters); it looks like it became available in 2016. Here are the pins that were worn by three of the four veterans. (The photos are tiny.)

One more photo from today. We first wrote about the project in this post. The display is called the RHS Back to Nature Garden, and it is something the Duchess has been working on for months. Below, a sketch of the design.

Kensington Palace said that “Over the past few months, The Duchess and landscape architects Davies White have visited plant nurseries, suppliers and specialist craftspeople who have been growing and building elements of the garden…”. In its story, The Evening Standard notes the images were taken in February. More from our original post on the garden:

The garden’s centrepiece will be a high platform tree house, clad in stag horn oak that is inspired by a bird or animal nest. It will provide a wonderful place to retreat and look out through the trees.

The garden will also feature a swing seat, rustic den and a campfire to encourage creative play and discovery for all generations The Back To Nature Garden aims to “highlight the benefits the natural world brings to mental and physical well-being,” according to Kensington Palace.

The Chelsea Flower Show preview is a week from today. There’s not been any official word the Duchess will be attending, but it would make sense she would be there to debut the special exhibit.

This 1:25 video is from the Press Association.

I love the shoes and her hair but i'm not feeling the dress on neither kate pippa, or abigail spencer!

I find it interesting that the DoC - the QUEEN of Belts...isn't wearing a belt with this dress.

Nope, sorry. This might've worked for Princess Diana in 1985, but not today...wrong decade.

I totally agree. This dress reminds me of an elderly school marm. I feel like this is one of her looks we look back on in 20 years and view it as a "miss."

Love the photo of her grandmother; I think they have the same nose!

Kate radiates warmth and such a genuine interest in the people she meets and the work she does. This dress is not my favorite, but I do love the nod to 1940’s style!

I love this dress! I love the way it accentuates The Duchess's long torso. I think it's interesting that some people find a long torso a negative thing. I myself had a long, slender torso, until I developed middle age spread :-( I always thought that it was one of my better features. I don't really mind the colour of the shoes. I probably would have preferred navy, but they are such beautiful shoes that I can live with the lighter colour. By the way, lots of people wonder how The Duchess manages to walk so elegantly in such high heels. I think she manages it because she has slender feet, and because she wears well designed shoes that are well balanced. I also think it is because she keeps fit and slim. Many years ago, I tried on a pair of gorgeous, expensive cream shoes with a high heel and they felt marvellous. I think they were made in Spain. I remember being amazed that they felt so comfortable and that I felt so well balanced. I couldn't afford to buy them, unfortunately. I bought a cheaper pair, with a heel the same height, but they didn't feel as comfortable as the Spanish ones.