The Duchess wore a floral print dress by Emilia Wickstead for today’s opening of the Back to Nature Garden at RHS Wisley. This is the third and final version of the garden. Kate had an unusual mode of transportation when arriving at the event. She even arrived on a tractor trailer alongside a group of excited kids and Mary Berry (an ambassador for RHS) from the The Great British Bake Off show. The royal even thanked the tractor driver, telling her: “Thank you, well done. The kiddies loved it!” A quick video from The Sun’s Emily Andrews.

Kate arrived with top cook & baker Mary Berry, who is also a patron of @RHSWisley. She made sure she thanked the tractor driver: “thank you: the kiddies loved it!” ???? pic.twitter.com/vdmTNG0MKy

The Duchess and Ms. Berry have met on multiple occasions, many of them RHS events. The Back to Nature Garden project is a joint effort with the Duchess, the Royal Horticultural Society, and Andrée Davies and Adam White of Davies White Landscape Architects.

The Mirror has more in this story:

Sue Biggs, RHS Director General, says: “RHS Garden Wisley is our flagship garden, welcoming over a million visitors a year, many of whom are families with young children, who we want to become the next generation of gardeners.

The RHS Wisley installation has elements from the May Chelsea Flower Show display seen below. As well as things used at the Hampton Court Garden Festival display in July, including this wildflower meadow. A news release notes, “New features include two connected treehouses and slides which encourage families and friends to have fun together in a natural environment.” Below, the tunnel at the garden.

The event was part of a Back to Nature Festival that included games, face painting, and other activities. It included representatives and clients from organizations and charities with whom Kate has worked over the years. A quick video via Hello! Canada:

Duchess Kate’s so good with kids ❤️ The royal had a blast today with the children who attended the Back To Nature festival in Woking, England Video: @hellomag pic.twitter.com/TGXaGWCLck

More of the fun. This little girl was darling. When asked about their favorite part of the garden, one group of children said it was the trampolines.

The Duchess of Cambridge enjoys the bouncing youngsters in her family-friendly garden, opened today at RHS Garden Wisley in Surrey pic.twitter.com/c078xcOfoE

No one will be surprised to see Kate’s funny face at an event like today’s. The Duchess dancing with 15-month-old Matilda.

Too cute! #KateMiddleton dances with a wee baby at the @The_RHS Garden Wisley – she tells mum Sarah that little #PrinceLouis loves to “smell flowers in the garden” ??? @KensingtonRoyal pic.twitter.com/i8WL3ufTuk

And chatting with Matilda’s mother, Sarah Griffiths. She has been a client of Family Action, one of the Duchess’s patronages. Kate and a young man at the festival. Here’s a cute anecdote via Hannah Furness in her Daily Telegraph story:

Meeting three-year-old Dylan Corbin, who had been enjoying the fairground activities and was dressed as an animal, the Duchess crouched down to ask him: “Are you a tiger?”

Now, I don’t know if the face paint response is from the boy seen above, or this little one, but they both looked fierce. Kate and one of the festival-goers. She said she has been thrilled to be a part of the Back to Nature project.

I am delighted that many of those features that first appeared in those gardens, have found a permanent home here at Wisley in the new children’s play garden. I hope it will enable thousands of children to discover and explore the natural world around them.

I am not as green fingered as many of you here, but I was passionate about creating a garden that inspired children and adults alike to get back to nature and reap the positive mental and physical health benefits that it can bring.

A video from Simon Perry, this one with Kate speaking.

Princess Kate — in Emilia Wickstead — delivering part of her speech about her Back to Nature garden project. This one, her third, is permanent and at @RHSWisley ?. https://t.co/CA90S198Zj pic.twitter.com/jOFUQ1hIJO

Continuing with text from the Duchess’s remarks.

Like in the animal kingdom, whether a pod, a pack, or a pride, the interactions we have with the broader community – be it with our grandparent, teachers or neighbours – play a crucial role in the growth and learning of our young.

There is a well-known proverb – that it takes a village to raise a child – everyone here represents an integral part of that very village. Now for what Kate wore at RHS Wisley today. She was in the ‘Aurora’ dress by Emilia Wickstead. Part of an exclusive capsule collection the designer did with Net-a-Porter, the dress is a lightweight cotton seersucker with a touch of elastane for stretch and ease of movement. The midi-length dress features a button front, chest pockets, deep cuffs, a wide belt, and self-covered buttons. The print is called ‘Rosewood,’ done in a textured Swiss-dot material. The material combined with the dress itself prompted varied reactions; some were reminded of Laura Ashley, while ElizaMo shared a similar pattern by Cath Kidston that she owns. As I mentioned on Facebook, it is a pretty print in a lovely color palette, but the pockets seem oddly placed, and it has what seems a common issue with Wickstead pieces, the fit on the bodice and the dart placement. More thoughts on the look from Tamara Abraham’s fashion piece in The Telegraph.

The dress is distinctly summery in style – with its floral print and pale Swiss-dot cotton-blend seersucker fabric – but with long sleeves – necessary given that temperatures have dropped in recent weeks.

Kate seemed determined to stick to a summer aesthetic though, choosing not to wear a jacket and teaming the dress with rope-soled shoes.

The colors blended nicely against the foliage. In its piece, Vogue said, “It made for the perfect piece to host a garden party—elegant, unfussy, and suited to the surroundings.”

Kate brought back her Fleur wedges by Monsoon London.

Unfortunately, they are no longer available. However, Audrey on the FB page posted a great repliKate you can see here.

Kate’s earrings are a bit of a mystery. Initially, I thought they were the Simple Filigree Short Drop Earrings from Accessorize, as suggested by Caroline Parr, always spot-on with her IDs.

They are described as having “scalloped edges and intricate cut-outs,” and most recently sold for £1.50. But I was prompted to take a closer look by Innominate_93 on Twitter, who does not believe they are the Accessorize style. It looks like Innominate_93 is probably correct. Below, a graphic showing some of the distinctions between Kate’s earrings and the Accessorize pair. As I mentioned on Twitter, it appears the interior wirework is more intricate and detailed on Kate’s. From what we can see it almost looks like the Accessorize pair is stamped metal, while Kate’s could be handworked.

At this point, I don’t think they are the Accessorize style. I could well be wrong, but the tiny details on both pair look different. I will do more research tonight, and if I get any kind of new information, I will update the post.  UPDATE SEP 17: After looking at more photos and chatting with a friend I’m leaning more toward these being the Accessorize pair. I’m not 100% convinced but am leaning that way.

We’ll leave you with one more photo. 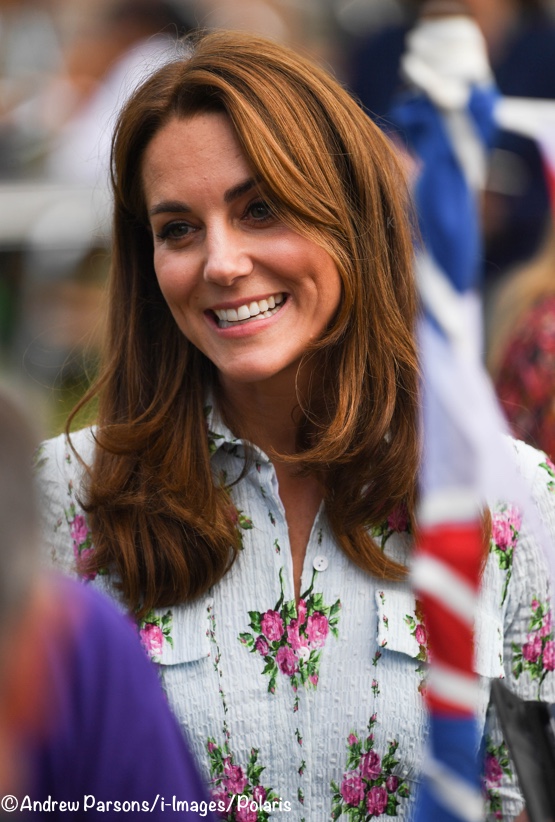 Looking back at the pictures today, I think I can spot Kate's Victoria Beckham bag being held by a member of staff in the first photo - what do you think?

So I'm way late commenting on this as I've been going through personal hardships and not focused on fun fashion royal commenting. I know Kate loves to theme dress, it's one of the things I love about her, whether I like the outfit or not. It makes Kate fashion watch fun. And it makes perfect sense to wear a floral design at an event with kids exploring a garden she co-designed.

But I dunno, this dress is confusing? I really disliked it when I first saw it. Now I don't hate it but it just so meh. The breast pockets are so unflattering and I saw someone comment on another site the pattern made it look like Kate was wearing a teacup and now I can't unsee it! It's just a very fussy look.

I'm terribly late to this party, but I'll say this: I would wear this dress in a heartbeat. I don't think the earrings are Accessorize for the same reasons you've listed here, even though everyone on the internet and their mother seems to think they are. Maybe they're a local designer. Or even Etsy! (one can dream) I quite like these shoes! Kate is always a dream with children. And she seems more comfortable with public speaking now than a few years ago, which is good.

Is this dress the same print as Sophie Wessex’s this year’s Ascot dress? Kate has been looking amazing this summer. She seems to be very comfortable & confident in her role as a mom & a future queen.

Hi, Rachel. You have a good memory, it is a similar print! But it's not quite the same. There are a couple of pictures in this post. :) https://whatkatewore.com/2019/06/18/the-duchess-in-elie-saab-for-royal-ascot/

A lot has been said about this dress, so I'll just add that the determination of modern designers to make Kate lood bad is quite baffling. It's as though they do it deliberately but fail every time, because her natural beauty shines through wallpaper print or long-waisted blue polka-dot nightmare from earlier this year. From what I see of her choices, there's a huge problem in modern fashion, and I do hope we'll see her wearing other brands that are actually devoted to beautifying a woman.