Kate in Favorite Look for EACH Nook Hospice Opening

Posted by admin
· 50 Comments
The Duchess brought back a familiar look for today’s EACH (East Anglia’s Childen’s Hospices) engagement in Norfolk, the formal opening of The Nook Hospice. The Duchess is the EACH royal patron; it was one of her first announced royal patronages. Kate’s initial public engagement with the organization was in 2012 at the official opening of the Treehouse hospice.

Below, you see Kate greeted today by children from Poringland School and Nursery. The children told the Duchess they raised more than $1300 for The Nook. Kate was in full mom mode — asking student Poppy Parslow-Williams, “Are you cold?” and rubbing his arm after seeing him shiver.

“It was amazing. I shook her hand!” he told reporters.

Niamh Bell, 11, added, “She was very kind. Even though she didn’t have a lot of time she still came to talk to us.”

EACH cares for children and young people with life-threatening conditions across Cambridgeshire, Essex, Norfolk and Suffolk. Here you see the Duchess meeting three-year-old Stanley Harrold and his mother, Stef Partington. Rebecca English shared a video of Kate speaking with the family.

Kate chats to some of the children who will be using The Nook facilities and their families @EACH_hospices pic.twitter.com/9ttEh4CsEB

Some of the services offered by EACH include specialized nursing care, symptom-management nursing, short breaks for caregivers, wellbeing activities, therapy, counseling, and volunteer services in the family home. Below, the Duchess greeting staff and supporters. Today’s engagement was very special, indeed, the culmination of years of work. Below, a look at the almost-completed Nook Hospice. Here is what the same plot of land looked like in early 2018.

After five years of fundraising and planning and construction, the new facility opened earlier this autumn! Many readers will remember when the Duchess helped launch the £10 million capital campaign for The Nook. A look at the initial literature and graphics used in the campaign. Other Nook campaign engagements included a visit to the Emma Bridgewater pottery factory to showcase a line of limited-edition items being sold as part of the fundraising drive. Another event was at historic Houghton Hall in June 2016. 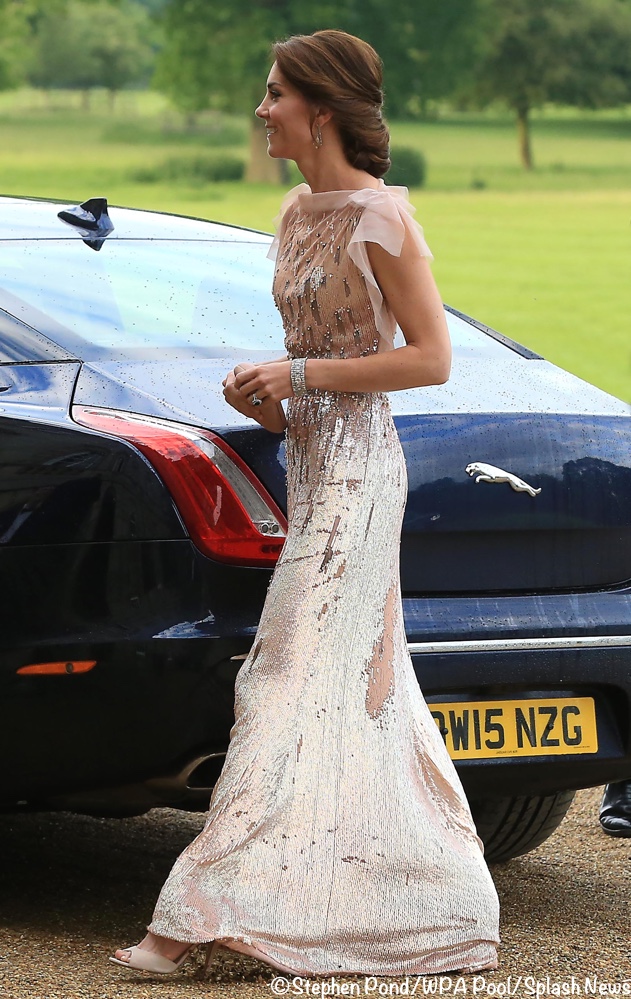 In January 2017 the Duchess received an update on the Nook status when visiting an EACH hospice in Quidenham. Which brings us to today’s event. Kate toured the new facility and spent time with patients and their families. All of the services are geared toward meeting not just the needs of the individual child, but those of the entire family. Here you see Kate with Isabella Alford, who is ten. Isabella has a progressive neurological genetic condition that is very rare. The Duchess talked with Isabella’s parents, Deborah and James Alford. More from Hello!

Her mother Deborah Alford, 44, said Isabella’s health had deteriorated in the last 18 months, meaning she now struggles with breathing when sitting in a wheelchair and must lie on a bed instead. And spent time doing crafts with children and their families. She heard directly from families about ways EACH services helped them. More from Rebecca English’s Daily Mail story:

The Duchess of Cambridge spent the afternoon meeting some of the families who benefit from the many services it offers, including those with very sick children and others whose children have died, asking about the care they receive.

She was then reunited with Leigh Smith, 38, who moved her to tears when they met in 2014 – when the royal first attended the launch of The Nook – just months after Ms Smith had lost her three-month-old daughter Beatrice to a rare heart condition.

Below, Leigh and her daughter Beatrice in a photo shared by EACH at the 2014 Nook fundraising launch.

Ms Smith said after their private meeting: ‘She told me, “I don’t know how you did that, how you got through it.”

‘It was really lovely to see her again and she gave me a big hug.

‘She asked me if I felt that what we had gone through was still a difficult subject to discuss in the wider community and I told her that yes, death is still a big taboo, especially children’s death.

‘But I told her how important her role has been in breaking down that taboo, and mental health generally, normalising it and making it easier to talk about such things.

Back in 2014, Rebecca reported that Leigh had written the Duchess a letter after Beatrice’s death, and she received a personal reply from Kate.

EACH reports that after meeting children and families today, Kate “remarked that the visit had “reinforced for me what the heart is of the work you’re doing here – and that is family.” Kate delivered remarks at today’s engagement. She applauded everyone involved with the project before speaking. Here’s a quick video from the Palace.

“You have created here at The Nook a nurturing, caring environment that allows families who are going through the unimaginable the ability to spend precious quality time with each other.” — The Duchess of Cambridge @EACH_hospices pic.twitter.com/CTsZCPtnHp

You have created here at The Nook a nurturing, caring environment that allows families who are going through the unimaginable the ability to spend precious quality time with each other, comforted in the knowledge that their children are being looked after in the best possible way.

The Duchess at the podium.

…the charity’s outgoing Chief Executive Graham Butland shared with T&C how the duchess has been keen to be kept informed. “She was very keen to have regular updates as to how the building was going,” he said.

Graham also noted how Kate has visited some of the families that the charity helps in their own homes as she continues her support behind the scenes. “She’s also made private visits to the hospice. She’s visited at least a couple of families in their own homes, all without publicity, not known etcetera,” he said.

The new building has more areas for clinical care and dedicated therapy rooms, which will allow EACH to meet the increased demand for its service and the ever-changing and more complex needs of those it cares for. From an EACH release:

After a five-year public appeal to raise £10 million and almost two years of building, EACH welcomed the first child to receive care at The Nook on Monday, 30 September.

Here is a very quick time-lapse of the Nook under construction.

Kate had helpers for the unveiling of a plaque marking today’s event. There are still some items needed at The Nook, and you can help purchase them through the Shop for the Nook site.

You can buy things like tea towels, mattress protectors, dishes, and other items here.

You can also buy a brick to support the Nook.

On a personal note, one of the very nicest things about this story is the contribution to EACH made through the Baby Cambridge Fundraiser held in 2013. The Fundraiser was a joint effort of five online royal fashion and news bloggers: British Royals, Kate Middleton Style, HRH Duchess Kate, A Petite Princess, and WKW. It was named “Baby Cambridge” because at the time we did the fundraising Kate was expecting Prince George. Ultimately we surpassed our goal.

In its news release about today’s event, EACH noted that “This momentous year, our hospice in Milton, Cambridgeshire, opened by Diana, Princess of Wales, has celebrated its 30th anniversary whilst it has also marked 20 years since it started delivering care and support in Suffolk and East Essex.” Below, Diana at that August 1989 Milton hospice opening.

More from a Cambridge Independent story:

EACH in its current form was established in 1998, when the hospice in Milton merged with one in Quidenham, Norfolk, that had opened in 1991.

Both realised it would be easier to achieve their objectives as one and coming together then meant EACH had, probably, amassed more experience in children’s palliative care than any other organisation in the world.

At the time, it was one of only four children’s hospices in the world. Below, an early view of the Milton hospice.

Here is an EACH newsletter covering Princess Anne’s visit to the Milton hospice in 2003 when she officially opened the facility’s new education center. There was a big thumbs-up from the Duchess as she left today. I think it wasn’t just for the new facility, staff, and services, but also for the culmination of five years of work by so very many people. The Oscar de la Renta suit is from the Fall 2015 collection, crafted of a stretch wool boucle. Below, the pieces as seen on the runway. From our initial description of the jacket:  the three-quarter sleeve tailored jacket (originally $2190) features a fitted bodice with a pleated, flared hem. There are dual front besom pockets, a pointed collar, and slits at the end of the sleeves. This piece also has multiple panels and seams below the yoke on the back and the pockets on the front.

The skirt (originally $1290) has box pleats and a hidden back zipper. Here is a closer look at the nubby texture of that fabric, a wool/poly blend with a touch of elastane for ease of movement. The suit was first worn in February 2017 for a medical conference, and again this January for a visit to the Royal Opera House. We saw the return of the clutch that was part of the Aspinal/Beulah London handbag collaboration. 25% of the profits from each bag sold were donated to the UN’s Blue Heart Campaign Against Human Trafficking.

The style is available in limited sizes at Net-a-Porter, in only a few sizes at My Theresa. One more photo of the Duchess, this one as she was leaving The Nook. Here is coverage from the Royal Family Channel.

The Telegraph offers just a bit more than one minute of coverage in this piece.

This 5-minute video from EACH explains the need for The Nook.