The Duchess in Alexander McQueen for Defence Rehab Centre Engagement, Plus News of Ireland & Australia Trips Kate and William joined the Prince of Wales and Duchess of Cornwall for a joint visit to the rehabilitation center, located in Loughborough, roughly 120 miles north of London. More from Simon Perry in his story for People:

Future kings Prince William and his father Prince Charles joined forces for a rare joint outing on Tuesday — bringing their future queens with them.

On a special day for the heirs to the British throne, who had Kate Middleton and Camilla, Duchess of Cornwall by their sides, William showed his father a new rehabilitation center for service personnel that is close to his heart. Victoria Murphy shared a video of the royals arriving.

Prince Charles and Camilla and Prince William and Kate arrive for a rare joint engagement at @dms_dmrc pic.twitter.com/OKdX13j7qp

Known as ‘DMRC Stanford Hall’, the center is on the grounds of the Stanford Hall Estate in Leicestershire. The center is operated by the Ministry of Defence, providing in-patient and residential rehabilitation services for serving members of the Armed Forces.  Prince William is the patron of the fundraising appeal for the center. The royals were given a tour of the facility by its commanding officer Captain Alison Hofman. Kate speaking with staff and patients about the facility. The foursome also visited some of the therapy areas. The facility opened last October. We learn more from a Forces Network story:

The Ministry of Defence-operated centre on the Stanford Hall estate, near Loughborough, began admitting patients in October 2018 and provides rehab treatment to serving military who have suffered battlefield, neurological or other injuries and illnesses.

The new facility at Stanford Hall is four times the size of its predecessor and offers designated bedrooms to patients who had once shared a room between four. More from The Daily Mail’s story by Rebecca English:

Former Major Peter Norton, a triple amputee, said of the Duchess: ‘She was asking me about the mental health and welfare aspect of the work here which is a huge part of the care you receive. It’s a very natural process here. They know the two go hand in glove.’ The Duke decided he’d try his hand at wheelchair basketball. More from The Telegraph‘s coverage:

Persuaded to have a go at basketball, William gamely climbed into a wheelchair to join the experienced servicemen and women in a game.

As shot after shot – taken from seated position – missed, Prince Charles took matters into his own hands to push the chair forwards so he was nearer the basket.

As yet another shot missed, Charles gave him an encouraging rub of the shoulders and William exclaimed: “It’s not going to go in!” The Telegraph’s Valentine Low tweeted a video of the basketball action.

Lovely father and son moment for William and Charles at the defence rehab centre in Notts. pic.twitter.com/NLYpmNNYxy

The Duchess saying goodbye to some of the patients. The Cambridges as they were leaving the facility. Thoughts about the visit via that Forces Network story:

It was clear just how much the visit meant to the patients, especially Lance Corporal Jack Silverwood, who is recovering after losing his hand in an off-duty accident.

“Great seeing them come round”, he said.

“For people who are wounded during work and stuff, it’s good to know that they’re not just put in a corner and forgotten about”, he added.

Wouldn’t be a royal visit without a plaque unveiling! 👑 The Duke of Cambridge, who was Patron of the DNRC appeal, also attended the official handover of the newly built centre to the nation in June 2018. pic.twitter.com/NFChIrUeGr

Kate and William greeting people who had been waiting in hopes of meeting them. As best I know this is the first joint engagement the two couples have undertaken since they all attended a Gary Barlow concert in December 2011. 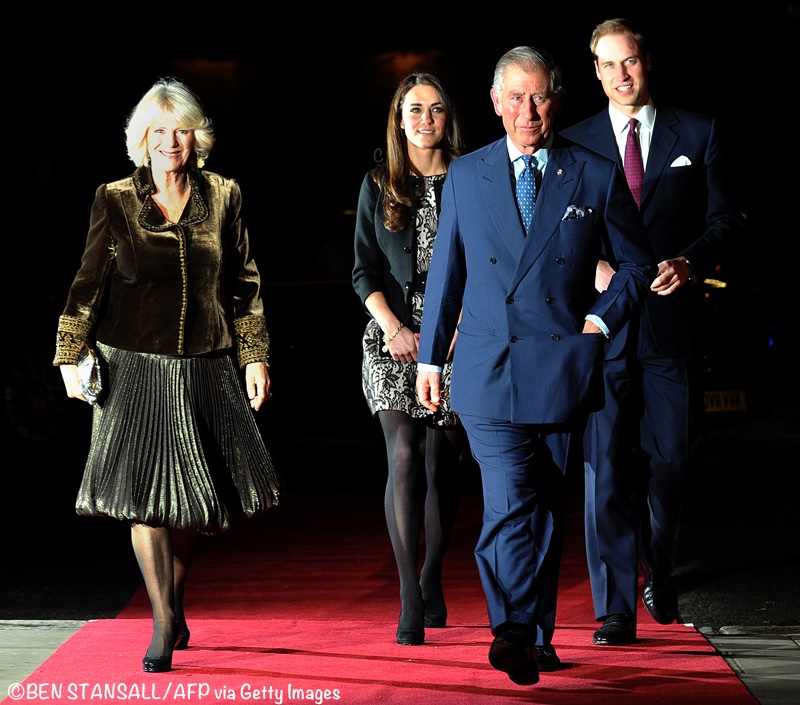 Now for our look at what Kate wore, beginning with her Alexander McQueen suit. The jacket appears to be based on the brand’s Military Jacket (now sold out) while the skirt has similarities to the Military Long Skirt (€1395, roughly $1500 at today’s exchange rates) and the Wool-Blend Midi Skirt ($1065).  All three of the off-the-rack pieces shown below are from the Pre-Fall ’17 collection, crafted of a wool/silk/polyamide blend. Kate had the peplum removed from the skirt. The structured jacket has McQueen’s classic military references like the high collar and buttons. The piece also features distinctive starburst darting (my term) on the bodice, defined waistband, and concealed placket. Many thanks to Heaven for her speedy ID work.

Many noted the jacket’s similarity to other McQueen garments we’ve seen the Duchess wear. From left to right you see today’s look, the coat worn for St. Patrick’s Day 2019, as well as the 2018 Remembrance Sunday look. The coat worn for the January away day in Bradford has some of the same design elements.  Several people remarked on social media Kate looked cold. The weather was less than inviting. Here is a quick video Victoria Murphy posted of the hail and wind at the Rehab Centre just before the royals arrived.

Bit of hail here at @dms_dmrc before the royal arrival 🌨🌨 pic.twitter.com/PLPZNJLiUJ

Beneath the jacket, Kate wore a finely ribbed knit top.

McQueen was an apt choice for the engagement; today is the tenth anniversary of Lee Alexander McQueen’s death. Below, one of a series of Tweets posted by the house to mark the anniversary. You can see the series of ten photos and captions used for the tweets here on the McQueen site.

The Duchess also carried a handbag by the label, the ‘Wicca’ style.

Kate has carried the Wicca in other sizes and fabrics. Below left, a wicker version at Wimbledon last July and on the right, an off-white color for the official naming ceremony of the Royal Princess in June 2013.

We saw the return of Kate’s boots that are believed to be an older Ralph Lauren style. I believe Kate’s gloves are the UFO style worn last week for the Wales engagements, and on other occasions. Many thanks to Heaven for her speedy ID work today!

Also today, news about one confirmed trip and another that is not yet confirmed.  Kensington Palace announced Kate and William will undertake an official visit to Ireland from Tuesday, March 3 to Thursday, March 5th. There are also reports the Duchess will join her husband for a trip to Australia. More from The Sydney Morning Herald:

Prince William and his wife, Catherine, are set to tour parts of Australia devastated by the recen­t bushfire crisis.

Scott Morrison will later this week formally write to Kensington Palace with proposed dates and locations for the trip.

Last month, the royal couple sent Australians a message of sympathy focused on those who had lost their lives and the firefighter­s who spent months defending­ people and properties.

“We continue to be shocked and deeply saddened to hear about the fires that are destroying homes, livelihoods and wildlife across much of Australia,” the statement said. “We send our deepest con­dolences to the families and friends of those who have tragic­ally lost their lives, and the brave ­firefighters who continue to risk their own lives to save the lives of others.”

The couple most recently visited the country together with Prince George in 2014. Hopefully, we’ll receive official word on this one way or the other in the not too distant future.

We’ll leave you with one more photo of the Duchess today. The Royal Family Channel has more than 6 minutes of coverage in this video.

The UK Press Association has roughly one-minute of video from today’s engagement in this piece.

Prince William shot hoops from a wheelchair – with a little help from his father, the Prince of Wales – during a visit to the Defence Medical Rehabilitation Centre near Loughborough pic.twitter.com/thG0trclJa