The Duchess wore a dress by The Vampire’s Wife for tonight’s reception at Guinness Storehouse’s Gravity Bar as they continue their tour of Ireland. Following a round of engagements earlier today (that post is here), Kate and William headed to the iconic brewery, a popular spot for tourists and Dublin visitors. A quick video from the Palace.

At Guinness Storehouse’s Gravity Bar in Dublin, The Duke and Duchess of Cambridge are meeting Irish people from across the creative arts, sport, business and charity sector #RoyalVisitIreland pic.twitter.com/WFTz38i4ow

The British Embassy tweeted that “TRHs entered through the “Queen’s Entrance” – the same door used by HM The Queen during her 2011 visit”. Rebecca English shared a video of the couple arriving.

The Duchess of Cambridge is vamping up the style stakes (there’s a joke or two in there somewhere!) in a dress by @TheVampiresWife pic.twitter.com/2erKiGcusv

The couple were taken to the Storehouse’s Gravity Bar which offers panoramic views of Dublin. There they sampled the dark Irish dry stout that originated in the city, but is now brewed in almost 50 countries. Below, the Duchess chatting with Sinead Burke (left), an Irish writer and broadcaster. The Daily Mail reports “The couple met a range of people from the creative arts, sport, business and charity sectors at the major visitor attraction in the Irish capital – which tells the story of the famous drink.”

Below, the royals speak with Liam Cunnigham, an Irish actor perhaps best known for his role as Sir Davos on Game of Thrones. The couple has said they are fans of the show. The Independent reports, “They also chatted to members of the fire and rescue service, coast guard and ambulance service, as well as Garda Commissioner Drew Harris. A number of charities, such as the Iveagh Trust, Alice Leahy Trust, Open Doors, Shannon’s Hopeline, were also in attendance.” ITV’s Chris Ship tweeted a video of the royals having a taste. Prince William delivered remarks. Below, the couple as he is introduced. He really had a terrific line: “We are retracing the footsteps of my grandmother, who was shown how to pour the perfect pint here in 2011. Ladies and Gentlemen let me tell you it is not often that I find myself following The Queen to a pub!” Kensington Palace tweeted a video of the Duke speaking.

? “It is not often that I find myself following The Queen @RoyalFamily to a pub!” — The Duke of Cambridge #RoyalVisitIreland pic.twitter.com/Lg1jfWhzAi

William also said he was “…looking forward to testing for myself the theory that Guinness tastes even better in Ireland than overseas!” More from The Independent’s story:

He ended the speech by raising his pint of Guinness and saying ‘Slainte’.

Food on the evening was served by Chef Mark Moriarty of the two Michelin started restaurant The Greenhouse, Dublin. 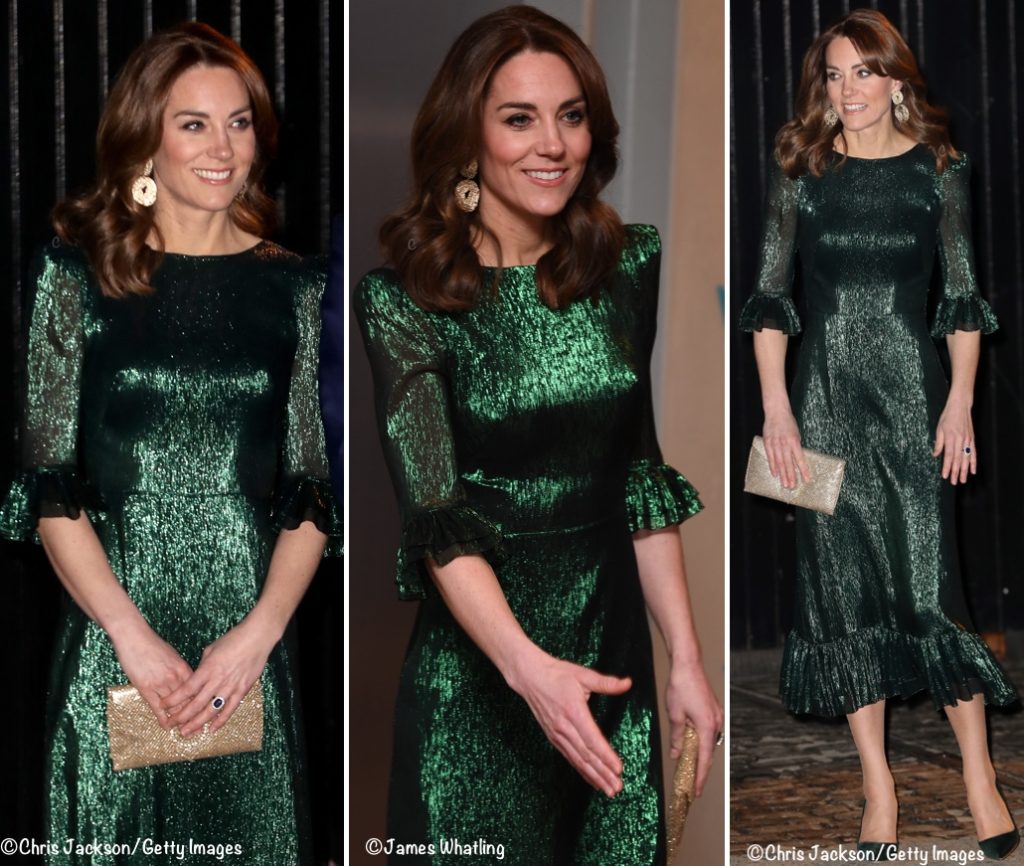 Made in an iridescent emerald green silk, the piece features a fitted bodice, semi-sheer three-quarter sleeves with ruffles at the cuff, and a full skirt with ruffled hemline.

The label was created by former model Susie Cave, and named after her musician husband’s unfinished novel. More about the brand from a 2018 Financial Times profile:

From red-carpet awards ceremonies to rock-star-studded afterparties, dresses by The Vampire’s Wife are having their moment in the moonlight. Using her own singular style as a blueprint, model-turned-designer Susie Cave (formerly known as Susie Bick) takes glam-rock fabrics such as velvet, metallic lamé and Liberty print florals, and shapes them into high-necked Victoriana-style dresses (from £485) with attitude.

Business began in 2014, when Cave joined with friend Alex Adamson to produce a range of vintage-inspired dresses, part Seventies hippy, part Little House on the Prairie. Since then, the rise of The Vampire’s Wife has been swift.

As several people pointed out on Twitter and Facebook, Princess Beatrice not only wears the brand, she has worn a very similar dress, the Veneration style. She is seen below with fiancé Edoardo Mapelli Mozzi at Ellie Goulding’s August 2019 wedding. More on tonight’s look in this piece from the Telegraph’s fashion news and features director Bethan Holt.

It’s been a long time coming, but I think we can now say with some certainty that the Duchess of Cambridge has shaken off the reluctance she once showed, understandably, to explore the ‘fashion’ side of getting dressed for her role.

Kate’s journey to choosing trend-cognisant outfits has been long and carefully managed. There was a time when pieces by of-the-moment labels would be worn, only for the next look to take her back on to safer ground. Over the past eighteen months, her look has developed, with more adventurous silhouettes and brands being introduced.

Another look at the Duchess this evening. It looked like Kate was in a new pair of heels, the BB Dark Green Velvet ($695) by Manolo Blahnik.

A signature style for the brand, the BB features a classic point-toe design and a 4″ stiletto heel. Our thanks to Middleton Maven for this ID.

The Duchess brought back her Charlie Gold Glitter Classic Clutch (£245, about $315) by Wilbur and Gussie.

And she repeated her earrings as well. They are a past-season design by H&M that we previously saw at a November 2018 Royal Foundation dinner. Many thanks to Valerie on the WKW Facebook page; she bought the earrings two years ago and was kind enough to share the product photo of them shown above. We’ll see you tomorrow for Day Two of the tour!

I like it. Yes, we now know there was a lot of green this trip, but it's her best colour & if it's Kate laying on the flattery, I'd lap it up! She often tries not to distract, so I don't mind a bit of over the top now & then. Certainly a more "out there" choice & I too applaud a fashion risk from her. I like the imsect comment: it WAS v much reminiscent of the Xmas beetles we get here in Oz! I didn't even notice the hem was frilled, until all the flack!! Can't have offended me that much then. I like the idea of her "inner bohemian".... I wasn't expecting a dress from the Vampire's Wife, but it would be cool to see more. The "Vampire" that Susie Bick is married to is, of course, our very own Nick Cave! Yes, he's still an Aussie: doesn't matter how long he's lived away!! Amazing to see SB turn to design to deal with the terrible grief of losing a child, & to have something creative & lovely come from it. I have to concur with the Madonna bust comment though: my first thoughts too! It would definitely have looked different in the flesh. PB's shoes were greatl: I landed on her photo first & thought it was Kate & got excited...showed me I've been longing for edgy shoes & didn't know it! Shoes lovely in their own right....could have done better with that dress though. Love the earrings...v similar to a pair I just picked up at Kmart for $2! Worked pretty well with the clutch. Go, matchy matchy...I do like to see a bit of a "tie-in"! .

I thought that must be you, Eliza Mo! As I skimmed thru the post I had to scroll back & check....& it was! Your comments are always so informed. Love the way you break down the elements of the outfit for me! And I agree one can't help but smile at the wild price swings. If we didn't know, we probably couldn't tell....so it confirms it is all in how you rock it, which is kind of heartening for those that can't afford designer!

The dress written up in the Guardian.

Thank you for the link, it’s an outstanding column! ?

At first I hated this dress when I saw that ruffle on the bottom. Then, I saw how it caught the light, and the almost structural bodice, neckline and shoulders. It gives Kate great curves and the color is very flattering. To me, the dress is lovely, minus the ruffle at the bottom. Thank goodness Kate didn’t choose the double-ruffled version of the dress that Princess Beatrice is wearing in that photo. Kate’s new haircut, makeup and earrings are stunning. Does anyone know what she’s changed, make-up-wise? Jane on the From Berkshire to Buckingham blog made a comment about her new makeup look and how Kate has changed up her eyeliner. I don’t know enough about makeup, but Kate looks particularly glowing and fresh-faces lately.

I feel like she has better concealer under her eyes and has reduced some of the lower lash liner as well as not applying her eyeshadow so high on the lid.

I love this look, everything except the ruffle at the bottom. I vastly prefer Kate's look to Beatrice's more fussy look and I love Kate's velvet pumps! She looks gorgeous and I even like the earrings with this dress.