I am back with a quick post on topics that do not include the Duchess of Cambridge, two stories that people expressed a sizable amount of interest in on social media and via email. They are Princess Beatrice’s wedding yesterday (a surprise!) and a followup to our coverage of the amazing World War II veteran, Captain Tom Moore.

We begin with news that Princess Beatrice of York and Edoardo Mapelli Mozzi were married yesterday at 11am in a small family ceremony. The duo opted for a private event with just a few family members present, adhering to government guidelines. The couple announced their engagement last September. The wedding was originally slated for May 29 of this year at the Chapel Royal at St. James’s Palace but was postponed because of the impact of the coronavirus. Yesterday’s ceremony was held at the Royal Chapel of All Saints at Royal Lodge in Windsor. The Queen attended the wedding with the Duke of Edinburgh. It is believed to be the first time since the lockdown started in March that the two have attended a family function together. Princess Beatrice wore a vintage Norman Hartnell dress loaned to her by The Queen.

The dress is made from Peau De Soie taffeta in shades of ivory, trimmed with ivory Duchess satin, with organza sleeves. It is encrusted with diamanté and has a geometric checkered bodice. It was remodelled and fitted by Miss Angela Kelly and Mr. Stewart Parvin. 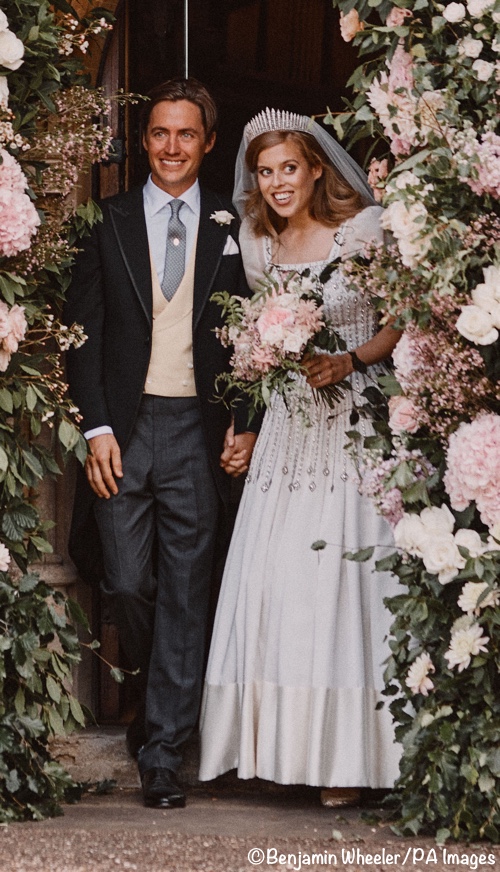 With thanks to Patricia Treble, the gown was worn for the 1966 State Opening of Parliament, seen below in a screengrab from a British Pathé film on the event. It was also worn for the December 1962 premiere of Lawrence of Arabia at the Odeon in Leicester Square. Norman Hartnell’s association with HM and other royal family members was significant, with the designer creating many pieces for historic occasions. Mr. Hartnell designed The Queen’s wedding gown seen below. He also created the Queen’s coronation gown. More about Mr. Hartnell’s work for HM via this Daily Telegraph story by Emily Cronin.

Princess Elizabeth’s wedding gown, with its thousands of crystal beads and seed pearls, was a prelude to the coronation gown five years later, one of the most important dresses of the 20th century.

The Queen asked him to model the gown on her wedding dress, and to incorporate British and Commonwealth symbols (English roses, Welsh leeks, Scottish thistles and more) in the design. The embroidery alone took six artisans 3,000 hours to create. After the coronation, he designed gowns for many of the Queen’s most important state visits.

Hartnell became “the first fashion knight” when the Queen Mother invested him KCVO in 1977. He continued designing for her almost until his death in 1979, while also dressing Princess Anne, the fourth generation of royal women to wear his designs.

Mr. Hartnell designed Princess Margaret’s gown for her marriage to Anthony Armstrong Jones in 1960.  Below, other pieces by the designer for HM, shared by the Royal Collection Trust. The turquoise ensemble on the right was worn by The Queen for Princess Margaret’s wedding.

The Queen loaned the Princess another item, Queen Mary’s Fringe Tiara.  It is the same tiara worn by Her Majesty on her wedding day in 1947.

More about the piece from The Royal Order of Splendor:

Queen Mary’s Fringe Tiara was made by E. Wolff & Co. for Garrard & Co. in 1919 and includes 47 diamond bars separated by smaller diamond spikes.

Another look at the glittering piece. On the morning of the wedding, as the hairdresser was securing Elizabeth’s veil with the tiara, the antique metal frame snapped. According to Garrard, the Queen Mother consoled her daughter by saying “we have two hours and there are other tiaras,” but Elizabeth was intent on wearing that particular piece.

Fortunately, a court jeweller was on standby in the event of any such mishap and took the tiara via police escort to the Garrard workshop to be repaired. After emergency welding the tiara was returned to the bride, with just a slight noticeable gap between the central fringe and the spike to its right.

Princess Anne also wore the tiara for her 1973 wedding to Captain Mark Phillips.

The Princess wore shoes that date back to at least 2011 when they were worn for the Duke and Duchess of Cambridge’s wedding, as they are shown below.

Princess Beatrice’s wedding ring was designed by Shaun Leane, who also did her engagement ring seen below. In an Instagram post, Mr. Leane said, “I feel very honoured to have been a part of their journey and to have been involved in the very special moments of designing and creating the engagement ring and wedding ring. I wish them a lifetime of love and happiness together.”

Mr. Mapelli Mozzi’s ring is a vintage gold band designed by Josh Collins of G. Collins and Sons, royal warrant holders whose work is favored by many members of the royal family.

Princess Beatrice’s bouquet was placed on the tomb of the Unknown Warrior in Westminster Abbey, a tradition believed to have been started by The Queen Mother. More about the service itself from a Palace news release:

The service included two of the couple’s favourite poems, read by their Mothers, and a biblical reading. These were; Sonnet 116 by William Shakespeare; “I carry you in my heart” by E.E. Cummings; and St. Paul’s First Letter to the Corinthians Chapter 13, verses 1-13. Prayers were said. In accordance with government guidelines, no hymns were sung, but a selection of music was played. The National Anthem was played but not sung.

In addition to HM and the Duke of Edinburgh, the ceremony was also attended by the couple’s parents and siblings. Prince Andrew walked Beatrice down the aisle; Princess Eugenie is reported to have been Maid of Honour and Mr. Mapelli Mozzi’s four-year-old son Wolfie was best man and pageboy.

Following the ceremony, The Daily Mail reports “A small party was held… at Royal Lodge, Prince Andrew and Sarah, Duchess of York’s Windsor home, with many of the 20 guests staying overnight – some in glamping pods outdoors.”

Edoardo descends from Italian aristocracy — which means that Princess Beatrice is now an Italian “Contessa” and “Nobile Donna,” or noble woman.

What a delight to see Princess Beatrice in a repurposed piece of HM’s, as well as Queen Mary’s tiara. Congratulations to the newlyweds! UPDATE SUNDAY JULY 19: Buckingham Palace has released two additional images from the wedding. Below, one of those two photos. The groom posted the two photos shown above, as well as a third, on his Instagram account earlier today, but later deleted them. My guess is he did not realize the Palace was going to release two them this afternoon (seen above). I have deleted the third photo he posted, believing that if he doesn’t want the photo online I should respect that wish.  UPDATE: The third photo is back on Instagram so I am comfortable posting it here. (Thank you, Sara, for the tip in your comment!) The Duke and Duchess of Cambridge congratulated the newlyweds via their Instagram Stories. It turns out the wedding was not The Queen’s only engagement yesterday.  HM’s other appointment is part of a followup on a story we first told you about back in April, the extraordinary fundraising effort for the NHS by Captain Tom Moore.  The Captain is a World War II veteran who wanted to raise money for the Health Service by walking 100 lengths of his back garden. As many are aware, the Captain was a remarkable fundraiser, ultimately bringing in donations totaling more than £33 million, or roughly $40 million!  More from the BBC:

Capt Sir Tom, who was given the honorary title of colonel on his 100th birthday, had initially set out to raise £1,000 for NHS charities by repeatedly walking an 82ft (25m) loop of his garden.

But he eventually raised £32,794,701 from more than one-and-a-half million supporters.

But it is now “Captain Sir Tom Moore,” as the veteran was knighted yesterday. Richard Palmer shared a video of the centenarian arriving for his ceremony.

Below, The Queen and Captain Tom in the Quadrangle at Windsor Castle. The BBC reports The Queen used the sword that belonged to her father, George VI, to bestow the insignia of Knight Bachelor upon Captain Sir Tom. Richard also tweeted a video of the ceremony.

While other investitures have been put on hold because of the pandemic, this unique ceremony was specially arranged to take place at Windsor. Below, the two World War II veterans having a chat after the ceremony. The veteran, now 100-years-old, said, “I am absolutely overawed.” The Captain was accompanied by family at the ceremony, including his daughter Hannah Ingram-Moore, his grandson Benjie and granddaughter Georgia.

What a terrific story, very much needed at this point in time, at least in these quarters. I hope it also helps put a smile on your face.

This 9-minute piece from British Pathé covers the State Opening in 1966 and is a treat to watch.