In advance of tomorrow night’s Wildlife Photographer of the Year Awards, a new video has been released with the Duchess, as well as a few still photos. The video and stills were shot at Hintze Hall at the Natural History Museum; the Duchess is the Museum’s royal patron. Here is a look at the video.

We’re thrilled to announce Her Royal Highness The Duchess of Cambridge @KensingtonRoyal, Patron of @NHM_London, will reveal this year’s Wildlife Photographer of the Year at our first virtual awards ceremony, livestreamed 13 October, 20.00 BST: https://t.co/DErYnYe58q #WPY56 pic.twitter.com/CCisxcuwLO

Kate will announce the winner as part of the first virtual awards ceremony for the prestigious award. The event will be streamed live starting at 8pm in London; that is 3pm on the east coast, noon on the west coast.  You can watch the awards via the Museum’s YouTube account and Facebook page. Now in its fifty-sixth instalment, the Natural History Museum’s Wildlife Photographer of the Year is the world’s longest running and most prestigious annual wildlife photography competition.

Harnessing the uniquely emotive and impactful power of photography, Wildlife Photographer of the Year works in partnership with the photographic community to inspire millions of people around the world each year to think differently about their relationship with nature and become advocates for the planet.

As noted in the graphic above, the awards will be hosted by photographer/broadcaster Chris Packham, and his stepdaughter, Megan McCubbin. Below you see them in an episode of their Self-Isolating Bird Club, a “virtual space for wildlife watchers and enthusiasts alike to share their pictures and videos of wildlife across the world during the COVID crisis.” If the name sounds familiar, Chris is designer Jenny Packham’s older brother. (The Telegraph did a profile in 2018 of the Packham siblings.)

This is not the Duchess’s first time taking part in the event. In October 2014 she attended the awards and handed out the Grand Title Award. On that occasion, she wore a Jenny Packham dress accessorized by her LK Bennett Agata suede sandals and an Alexander McQueen clutch.

Here is another look at Kate shooting the video. She is in a fitted jacket with satin lapels, sharply angled pockets at the hips, a chest welt pocket, and padded, peak shoulders. Many of these are signature design elements for Alexander McQueen, but we’ve not been able to locate this exact jacket for sale anywhere or in archive photos. Below, three current Alexander McQueen jackets with similar design elements: a Prince of Wales Jacket; a Grain de Poudre Wool Blazer; a Peak Shoulder Wool Jacket. I am not suggesting any of these is what Kate is wearing, merely pointing out similar elements. It is possible the Duchess is wearing a one-off piece.

UPDATE OCT 13: The Duchess wore the same ensemble for her video announcing the Wildlife Photographer of the Year Award. This link includes the entire broadcast; her appearance is at roughly 1:33 (1 hour, 33 minutes) into the broadcast.

Don’t forget to get your questions in throughout the evening – use #WPY56 and comment under the live stream here: https://t.co/9YDG5IbLSE

Congratulations to Sergey Gorshkov for his photo, The Embrace.

The Museum did release one more photo from the taping of Kate’s portion of the program. I added a portion of the new photo to the montage from yesterday. I did notice in the new photo that it looks like the sleeves have a slight flare, widening at the cuff; they also have three satin buttons. You can see the Duchess has on a pair of slim-cut black trousers to match her jacket. A number of terrific suggestions have been offered as a possible ID on the piece via comments on the post, email, and direct messages. One several people have made is that it looks like the jacket Kate wore over a Whistles dress in June 2012 for the Diamond Jubilee Concert at Buckingham Palace.  Unfortunately, I do not have better photos of that event than what is shown below. Other suggestions include the three pieces shown below. On the left, the Leaf Tailored Crepe Tuxedo Jacket; Kate’s pockets are more angled than these, and I don’t believe her lapels are that wide. In the center, a piece suggested by Kate, aka CopyKate on eBay. She doesn’t know the age of the piece but did point out it was available at one time on multi-brand luxury retailer My Theresa; of the three it seems the closest to what the Duchess wore.  The piece on the right is from FarFetch and it was suggested by Renata before we saw today’s photo; it looks like it is longer than what the Duchess wore. For anyone seeking a repliKate, I added a few to the page.

The Duchess wears matching trousers and what could be the UFO belt noted last week with the Massimo Dutti ensemble.

UPDATE OCT 14: The ever-brilliant Liz from Kate’s Closet has shared what looks like a good ID on the belt.  In this next montage, you see the Anderson’s Croc Effect Leather Belt ($160) in the upper photo; it was suggested to Liz by a reader. The lower two shots are today’s ensemble (seen bottom left) and the Massimo Dutti separates worn for a World Mental Health Day engagement (seen below right). Based in Italy, Anderson’s is a family-owned business manufacturing upscale men’s and women’s accessories.

The folks at UFO No More believe the Duchess is wearing a pair of Accessorize Earrings, the British brand’s Pearl Rope Drop Earrings.

These look like they could be the pair Kate is wearing, although I’m not 100% convinced, if only because we don’t have hi-res photos. I could not find the earrings on the Accessorize US or Global site; here you see them at Nykaa, “India’s largest omnichannel beauty destination.”

If we see new photos tomorrow evening I will update this post. If the Duchess wears something entirely different I will do a separate post. They were not the only Cambridge family members in attendance; Princess Charlotte and Prince George were in the wedding party. Below, the bride in a Peter Pilotto wedding gown and the Greville Emerald Kokoshnik Tiara. Kate was in a bespoke Alexander McQueen dress. It bore great similarity to the Duchess’s 2017 Trooping the Colour dress. 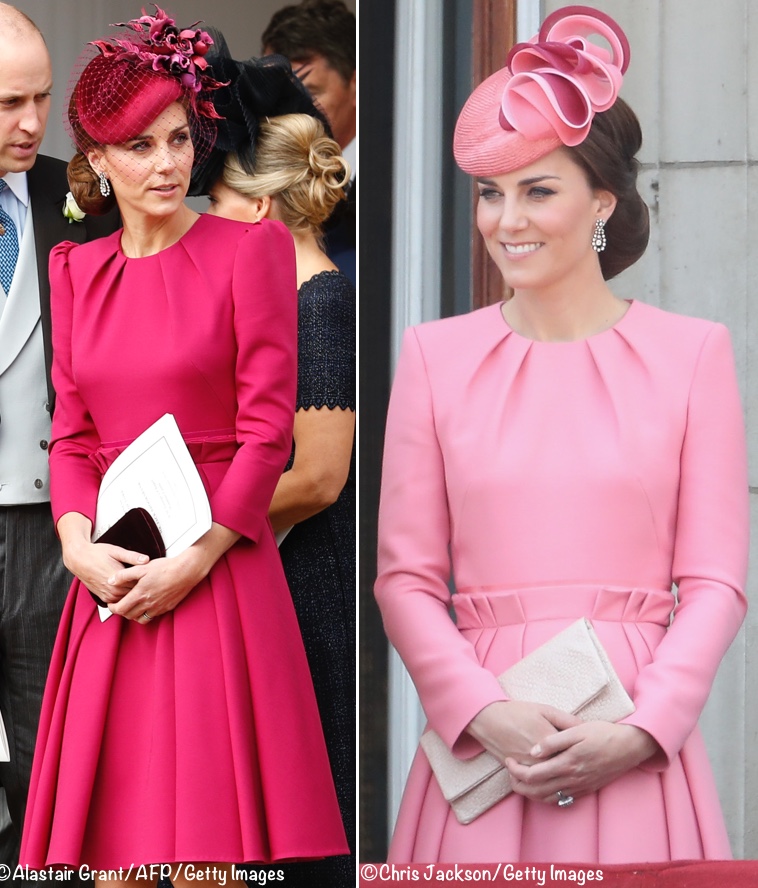 For the 2018 wedding, Kate chose a Philip Treacy hat. 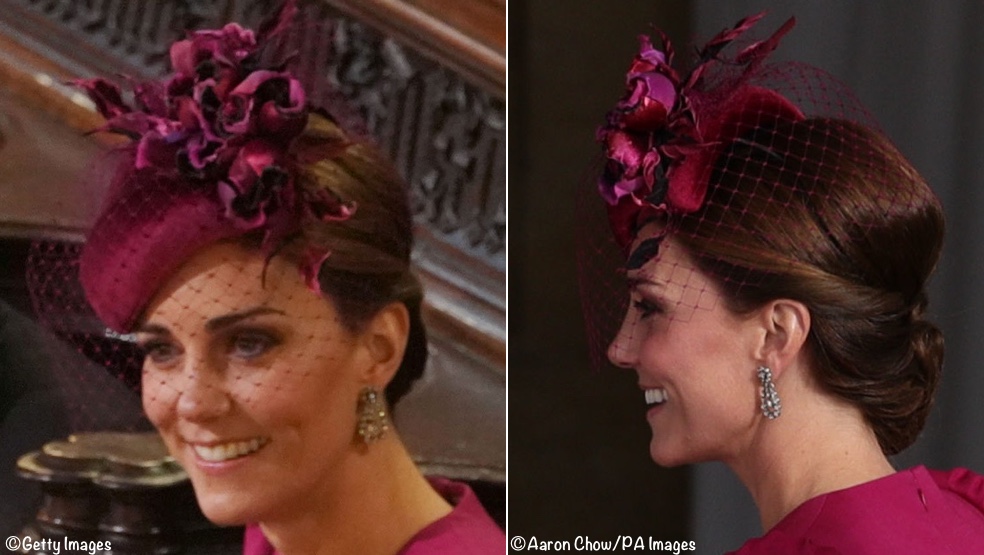 She also wore the Queen’s diamond drop earrings and carried what is believed to be a Parada clutch and Prada heels.

Here is one more photo of Princess Charlotte. We’ll close with Happy Thanksgiving wishes to all of our friends in Canada who are celebrating the day!