The Duchess of Cambridge wore a new dress by Alessandra Rich this evening as she and the Duke of Cambridge took their children to a special holiday performance of Pantoland at the Palladium. The special performance was sponsored by the National Lottery and held for key workers and their families as a way to say ‘thank you’ for their efforts this year throughout the pandemic.

Here is a video of the family arriving via a video from Richard Palmer of The Express.

The Duke and Duchess of Cambridge took their children to a special pantomime for key workers at the London Palladium this afternoon. pic.twitter.com/V1l4mXEWJA

The Duchess with Prince Louis and Princess Charlotte. Prince George, Princess Charlotte and Prince Louis are in the Christmas mood!

School’s out and the little royals were taken by their parents for some traditional British holiday entertainment on Friday. Mom Kate Middleton and dad Prince William treated an excited George, 7, Charlotte, 5, and Louis, 2, to a pantomime performance at the London Palladium. Emily Nash reports in Hello that “The Cambridges stopped to look at performers dressed as elves, including one juggling artificial snowballs, as they made their way to the entrance….”. You can see a little bit of that in another video from Richard Palmer.

George, Charlotte and Louis made their red carpet debut at an official royal engagement. pic.twitter.com/FwkSodbLHJ

One more view of the family before they enter the theater. The Duke and Duchess inside the theater. More about the event from a Kensington Palace news release:

In recognition of their vital work, key workers from across London including NHS staff, delivery drivers, refuse collectors, emergency services staff, charity workers and volunteers were invited to a special performance of The National Lottery’s Pantoland at The Palladium starring Julian Clary, Elaine Page and their fellow cast members.

This year, the National Lottery is supporting pantomimes at ten theatres across the country, helping them to safely open their doors to the public by providing funding for the empty seats required for social distancing.

The Duchess speaking with key workers. Here is a video from The Daily Mail’s Rebecca English.

During the interval William and Kate – in an Alexassandra Rich dress – chatted with some of the key workers and their families pic.twitter.com/NFPZjdbwMP

William delivered remarks at the event. More from The Daily Mail‘s story:

He told the audience sitting in family groups with social distancing between them: ‘It’s wonderful to be back here in the West End and see theatres reopening their doors….Catherine, George, Charlotte, Louis and I are all really looking forward to the show.

‘We are here tonight for a very special performance. Special, because of you – the key workers here in the audience. ‘You include community workers, volunteers, teachers, NHS staff, representatives from the emergency services and military, researchers working on the vaccine, people helping the homeless, those manning vital call centres, and staff from a wide range of frontline charities – to name but a few.

‘You have given your absolute all this year, and made remarkable sacrifices.

‘So too have your families, who I’m sure have seen far less of you than they would have liked. It’s lovely that you are all here together tonight.

As far as I know, this would be the first time the children sat in the Royal Box at the theater.

They seemed to have a terrific time. 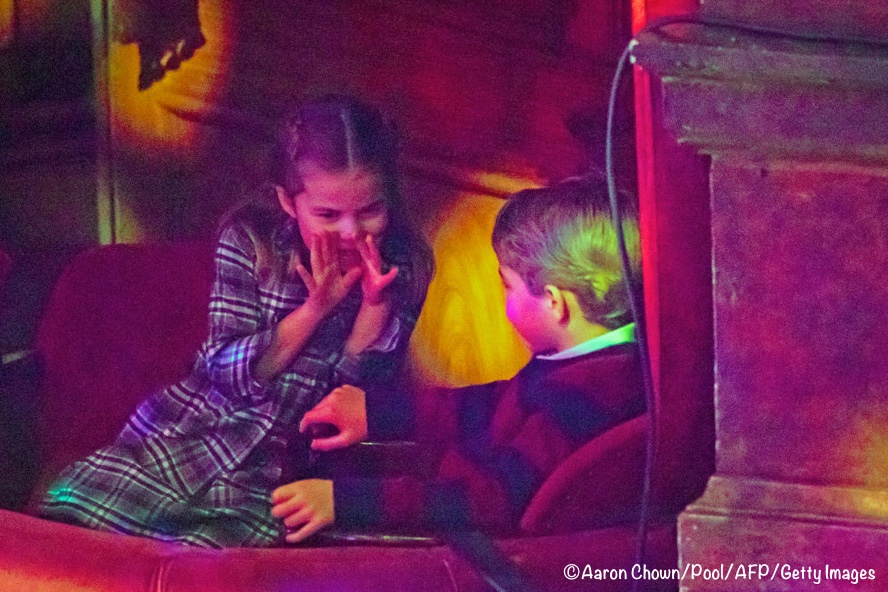 Now for our look at what Kate wore. She was in the Alessandra Rich Petal Print Silk Dress (out of stock). The dress is 100% silk with a multi-tiered ruffle collar, yoke waistband with gathers, button cuffs, and hidden back zipper. Thank you to Emily for her ID of this piece.  Here is a closer look at the neck ruffle and waist. The Duchess appeared to be carrying a new bag. Thank you to Innominate_93 for her suggestion that it is the Ludlow Concertina Crossbody Bag (£625, roughly $830 at today’s exchange rates) by Smythson, it looks like that is probably the case.

The bag is part of a collection using an “accordion-like structure from Victorian organisers found in the Smythson archive,” and it has two pockets and a zipper closure.  UPDATE: With thanks to CAL for her comment, this is not a new bag; Kate was seen carrying it when she did some shopping back in March. (I didn’t do a post because the photos weren’t from an official engagement.)

The Duchess may have been wearing her Prada pumps but I want to look at more closeups before saying that is the case.

She was also wearing a mask that looks like an Amaia Kids Liberty London print. With thanks to all emailing and commenting and messaging, the Duchess wore her Wiltshire Bud Mask (£15), seen below as worn earlier this week.

As well as the Simon Rocha Faux Pearl Curb-Chain Earrings ($310) identified during this week’s mini-tour aboard the Royal Train.  The photos below are of Kate wearing the earrings during that trip.

I will update the post if I learn anything new about the shoes or mask worn by the Duchess. I will have more on the children at What Kate’s Kids Wore in another hour or two.

Here is one more photo; I believe the children were watching their father speak at this point. She dressing is subtle and that is the best part. No bling

I love the dress and her envious inducing hair! I think her jewelry is perfectly appropriate given the occasion - she isn't working for the Queen on an official engagement. What a delight to see the whole Cambridge family together!

What a wonderful treat to have such a merry festive occasion to enjoy in our less-than-natural times. The Cambridges have twice outwitted fate this Christmas to give us two major iconic images, the floodlit scene on the steps at Windsor Castle, and this effortlessly natural image of children being taken to the pantomime.

I’m not 100 per cent convinced by this latest Alessandra Rich offering, though no doubt it’s meant to fade into the background a bit to focus on the children. The ruffle yoke detail is beautifully done in itself, but it makes the dress top-heavy, and in Kate’s case it’s particularly unfortunate to broaden her shoulders while falling away to nothing at the hips.

But a couple of youngsters at about waist height go a long way to counter the slender hip line and the print looks very pretty. I think it’s an admirable ‘mum’ choice for a panto trip. Discreet earrings and bangle finish the look nicely and black courts seem almost de rigueur.

Honest to God I did a double take at the first picture. I thought the shoulder area of her dress had some weird Star Trek uniform thing going on. Upon seeing another photo I was not impressed with the rest of it either. It's like they say about the mullet hairstyle; it's business in the front and party in the back, but this dress has too much "party" all over in that it's way too busy. It's a hard pass for me. She looks beautiful other than the dress.

Wills definitely has his look down and those kids are adorable.

What a delight to see the Cambridge family out for a theatrical performance at the holidays! Loved seeing them all. I had difficulty appreciating pantomime until I attended a brilliant performance by Marcel Marceau some years ago, in which he masterfully convinced his audience of the existence of people and things on stage that were invisible! To my eye, the Duchess often conveys subtle messages through her attire. I associate pantomime with Pierrot and ruffled collars, so I view her beautiful dress as an elegant tribute to the art form!

Linda, I believe that you are confusing pantomime with mime. Marcel Marceau is brilliant at mime and it is well understood why you enjoyed seeing him perform.

A definition of pantomime: Pantomime ( informally panto) is a type of musical comedy stage production designed for family entertainment. It was developed in England and is performed throughout the United Kingdom, Ireland and (to a lesser extent) in other English-speaking countries, especially during the Christmas and New Year season. Modern pantomime includes songs, gags, slapstick comedy and dancing. It employs gender-crossing actors and combines topical humour with a story more or less based on a well-known fairy tale, fable or folk tale. Pantomime is a participatory form of theatre, in which the audience is expected to sing along with certain parts of the music and shout out phrases to the performers.

Mime: The theatrical technique of suggesting action, character, or emotion without words, using only gesture, expression, and movement.