The Duchess of Cambridge wore styles seen on previous occasions for a morning engagement at University College London. Below, the Duchess arriving at the college’s Insititute of Education. She was there to visit the Centre for Longitudinal Studies. Here is a quick video from Rebecca English as the Duchess arrived.

Kate has spent a decade highlighting the importance of the formative years of a child’s life and has established her Royal Foundation Centre for Early Childhood. pic.twitter.com/ou1GUbaSaM

Researchers at the center are working on a new study, “The Children of the 2020s”. In a statement released before her visit, the Duchess said:

“The landmark ‘Children of the 2020s’ study will illustrate the importance of the first five years and provide insights into the most critical aspects of early childhood, as well as the factors which support or hinder positive lifelong outcomes.

“I am committed to supporting greater in-depth research in this vital area and I’m delighted to be meeting all those behind the study at this early stage.” The subject matter ties in with the Duchess’s Early Years work. More from University College London’s story about the visit.

During the visit, The Duchess viewed archive material of historic research dating back to the 1940s into early childhood including a ‘Birth Questionnaire’ given to new mothers in 1958, which included questions about pregnant women’s smoking habits. While not a standard question at the time, the responses allowed researchers to track the impact that smoking during pregnancy had on a baby’s birth weight, and also how it continued to affect different aspects of a child’s life into adulthood. This led to a public health campaign to stop women smoking whilst pregnant, something which is now commonplace. Hannah Furness reports in her story for The Telegraph that “The new research will examine the home environment, the community, early years services and the broader social and economic circumstances of the family, via 8,000 families with babies born in April, May and June 2021.” The study has been funded for at least five years, with hopes funding will be arranged for many more years. More about today’s visit from Emily Nash in her Hello story.

Kate was then shown archive material of historic research into early childhood dating back to the 1940s, including a “Birth Questionnaire” given to new mothers in 1958.

“We had answers to questions around who looked after the husband while the woman went into hospital,” said Professor Goodman.

“Oh, it was different then!” remarked the Duchess. Emily also reports, “The nationally representative….study will track the holistic development of children in England from the age of nine months to five years. Researchers will begin recruiting up to 8,000 families in January 2022 for babies born in April, May, and June 2021.” Many will recognize the Zara dress, first worn in January 2020 when the Duke and Duchess visited Bradford in West Yorkshire. It buttons up the front, has a pleated skirt, v-neck with attached bow, elastic on the inside of the waistband, button cuffs, and a wide self-belt. The Duchess also brought back a pair of Hugo Boss heels.

First worn to a children’s tea party at the Natural History Museum in November 2016, the embossed leather heels in embossed leather feature a pointed toe and 3.4″ heel (9cm).  The colorway is officially called “anthracite.”

We saw the return of the Duchess’s Mappin and Webb Empress earrings.

We’ll leave this portion of the post with a fun tweet about the visit by Professor Vivian Hill.

This is what happens when the Duchess of Cambridge visits the university while you are teaching. pic.twitter.com/h40K9zLWaw

Also today, more about the Jenny Packham gown worn by the Duchess to last week’s premiere of No Time To Die, the latest James Bond film. It turns out the design is actually part of a special Jenny Packham X 007 collection of eight gowns created to celebrate the sixtieth anniversary of James Bond. The collection starts from $2,759 and includes two dresses that are recreations of actual Packham designs worn in both Die Another Day and Casino Royale — career moments which the designer acknowledges she will always cherish.

“The Bond movies have been the cinematic constant of my life and their glamour has always inspired me,” she says. “So, when I am asked to describe a highlight in my career — to see one of my designs in a Bond film is absolutely one of them.”

Now for a peek at the Goldfinger gown, the style the Duchess’s dress was based on. First, a refresher of the dress as worn last week. The gown is described as being “covered with metallic folded sequins and crystals on a base of glitter tulle.” The product notes also say, “A floor-length embellished cape is draped over the shoulders and down the back to complete a truly scene-stealing design.”

There are clear differences between the Goldfinger off-the-rack dress and Kate’s design, especially in the neckline. The embellishments on the two dresses are also different. 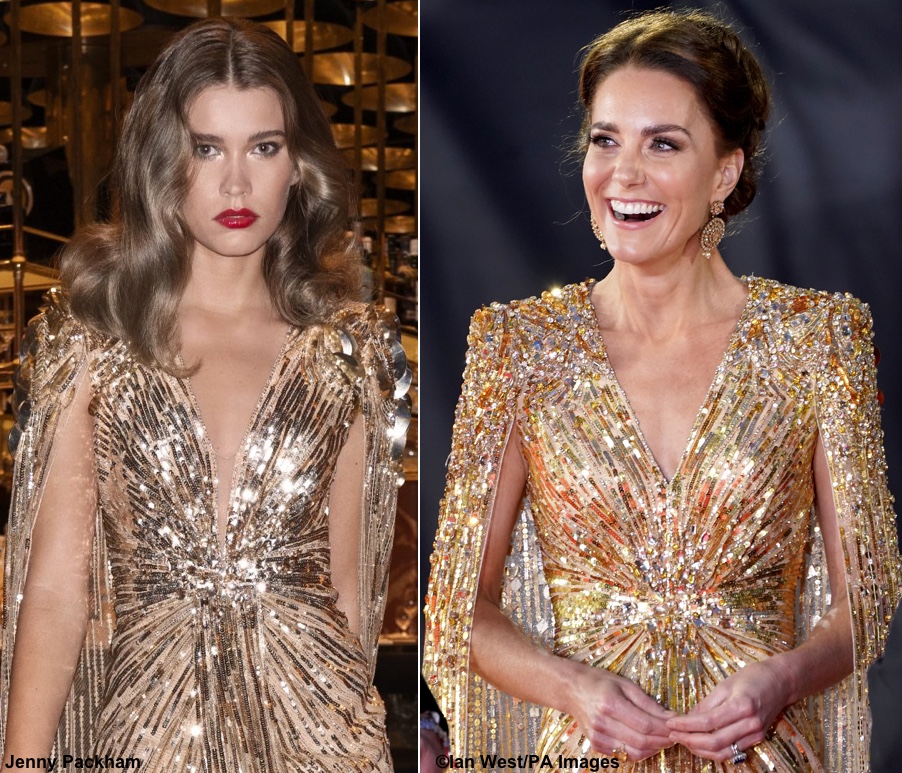 The gowns are available at luxury retailers like Neiman Marcus and Farfetch.

Hear more from @UCL‘s Professor Pasco Fearon about their landmark ‘Children of the 2020s’ Study, which will illustrate the importance of the first five years and provide insights into the most critical aspects of early childhood. pic.twitter.com/NnWmVz1490

— The Duke and Duchess of Cambridge (@KensingtonRoyal) October 5, 2021

The Zara dress is just “meh” for me, but a perfectly appropriate dress for work. I think I would like it better in a different fabric-it just looks a little cheap to me- , and without the neck-bow.

The gold gown is just stunning, and I love that Kate wore a Jenny Packham gown that was linked to the Bond films.

Personally I prefer the Duchess's tailored Packham gown to the one modelled. A stunning ensemble doesn't need to be flesh-baring or low cut.

I love the longer hair with drop curls. It's perfect Princess hair.

I think the shoes are amazing with the dress - just the right accessory - they brighten up the dress, which is perfectly appropriate for the occasion.

I would have preferred to see Kate with her hair pulled back; I feel it would have been a much more professional look for what was a professional visit. Otherwise, I find nothing to carp about.

I’m not fond of the dress although I like the pattern. I also am not loving her hair. Neither style does her justice.

She’s simply stunning in the gold gown and updo. I also love how happy they look.

Her hair is getting longer- almost the long length she used to wear. It is also styled the same- super long and curled at the ends. Her hair looks beautiful long or short but I much prefer no bangs.