A better view of the Duchess and the dress. The Duchess selected a spectacular black velvet frock by Alexander McQueen, a modified version of the brand’s label’s “Strapless Velvet Gown“ at Net-a-Porter; it originally sold at £3,995 (approximately $6200), but is now completely sold out. 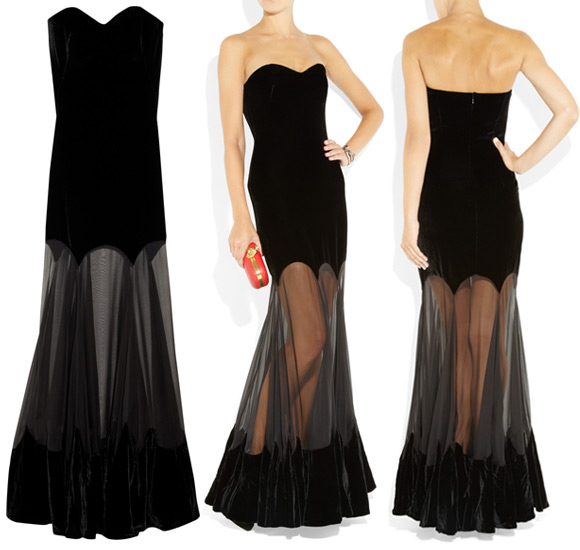 Much as some hoped to see Kate in this exact gown, the transparent black chiffon from mid-thigh to shin wouldn’t have been at all appropriate, nor in sync with her style. Kate’s velvet dress has a sweetheart neckline delicately trimmed with pleated black tulle or chiffon, a flared trumpet-style skirt, and a figure-hugging fit. I expect it is the same silk/rayon blend used in the off-the-rack gown shown above. Diana’s dress was worn on her first formal black-tie appearance following the announcement of her engagement to Prince Charles; there are a number of notable elements about the two dresses:

Of course, Diana’s gown was more-than controversial; not only was it black, the decolletage was scandalous, especially for a young Lady about to marry Prince Charles; obviously that was not a concern with the McQueen couture dress this evening. Kate has shown herself to be an astute follower of previous royal fashions, the similarity of elements between the two garments require one view tonight’s dress as an homage to Princess Diana. Others think Kate wore the Jimmy Choo ‘Cosmic’ in black suede, with heels of 120mm, or 4.8″, although they sit upon a sizable platform that looks to be at least 1″. This shoe is still available on the Jimmy Choo US website, priced at $695. A tip of the hat to WKW FB friend Ashley who pointed the shoes out.

To be honest, I have no idea which shoe it is, although these are both very good candidates. UPDATE: I believe the Duchess wore the Jimmy Choo shoes.

UPDATED: Kate’s bag is by Pretty Ballerinas, by Jaime Mascaro. We show the bag at Large Size Designer Shoes, it measures roughly 11″ x 7″, has a double magnetic clasp closure, and is lined in signature Jaime Mascaro fabric.  The clutch originally retailed at roughly $245 but was last on sale at about $145 USD.  It was the perfect accent with her ensemble, enhancing the look without detracting from the exquisite jewels, the sensational dress, or the Duchess herself.  The credit for the identification of Kate’s bag goes to Vera, who was kind enough to let us know!

The evening was already glamorous, but Kate boosted the glitter factor, shimmering in a new suite of jewelry, diamonds, and rubies at her neck and wrist. Here is a closer look at the jewelry.

UPDATE: The set is by Mouawad, a Lebanese company. It is believed to be a wedding gift.

We have seen the earrings previously, below we show Kate wearing them this evening (left) and at the Canada Day concert this summer during the Royal Tour (right). Our many thanks to those who left comments here and on Facebook correcting my statements that the earrings were also new, special appreciation to Anna of My Small Obsessions.  The Royal Order of Sartorial Splendor shows Sophie wearing just such a piece both ways in this post.

One of the most striking aspects of the evening is that it seems clear Kate plans to bring black back to the House of Windsor, at least on some level; a topic we’ll explore more in the future. In my estimation this is one of Kate’s best looks: the black velvet was seasonably appropriate and the style more sophisticated. Kate’s hair is always lovely, worn up it would have looked a tad more elegant, more in keeping with a black-tie function. But really, the Duchess looked so lovely we’ve no interest in nit-picking on any level.