Today we have several quick tidbits to share, what we often call ‘bits and bytes’. We begin with updates to Kate’s Calendar:

At the top of the news list, a fourth official photo was released of Prince George’s christening last week, shown here on the cover of People‘s special issue. It is by far my favorite of the four images. Special commemorative issues of magazine are in abundance, this is the cover of Hello! Canada. Kate was out and about last Friday, seen shopping at Zara Home. We don’t have a license to post any photographs (they can all be seen here, at PopSugar), but can share what Kate wore.  The Duchess was in her skinny jeans and a blouse purchased more than a year ago, the ‘Debarn’ by British-based retailer Jack Wills. 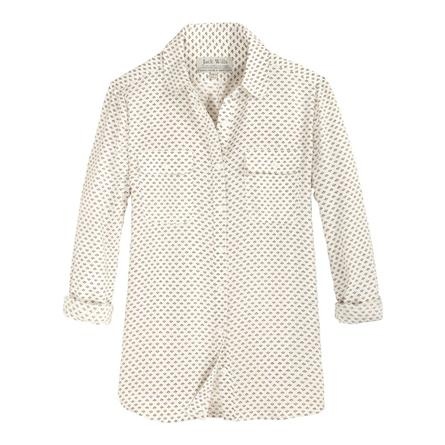 At the time of the purchase, Jack Wills tweeted about the purchase and even shared a photo of an employee in their Glasgow store wearing the blouse. It looked like the Duchess was in another garment that was purchased more than a year ago, the Zara Long Cashmere Cardigan we showed in this post. There was sad news for Collette Dinnigan fan this week, with word she is closing down the majority of her business. The designer shared the news in a handwritten note via social media. More from the Sydney Morning Herald:

By year’s end Australia’s most internationally acclaimed fashion designer will have closed her eponymous boutiques in Sydney, Melbourne and London and stopped producing the high-end bridal and evening attire on which her reputation has been built and which she now sells worldwide.

Back to the Herald story:

Unlike the long list of those in the industry who have hit the skids, Dinnigan insists that she is not in financial trouble. The business is profitable and there is no debt, she says.

Rather, the 48-year-old’s time was the crunch point. She needed more of it after giving birth to her second child last November, a son, Hunter, who joins nine-year-old Estella and husband Bradley Cocks, whom she married in mid-2011.

It is boot season and we have a few updates on specific styles. The Zipkin boot by Stuart Weitzman is back in stock; we show the Duchess wearing it in Denmark for a UNICEF event. We want to update everyone on another pair of boots, the Bally shown below. Intrepid WKWer Lucy got in touch with Bally about the footwear, she was told the boot’s style name was the “Thrall,” it was from the spring/summer 2007 collection. Since our original post on the boots we have been told about a number of repliKate options. Below left, the Cole-Haan Air Cara at Nordstrom ($299.90), the original boots are in the center, and the Naturalizer Larissa is seen below right, it is on sale for only $56.99 at 6pm.com. A reminder about our Aquatalia by Marvin K. giveaway: entries close at midnight tonight (Friday, Nov. 1, 2013), you can see the nifty prize being offered and learn how to enter here. We will announce the winner early next week.

I am touched that William and Kate are spending time Thursday with the poppy volunteers. Each year, I change my avatar and wear the poppy in honor of my grandfather, who fought in WWI. Next year marks the 100th anniversary of the start of WWI in Europe (the Americans didn't join until the very end of the war, but it was a four-year slog for everyone else).

WWI was especially hard on our friends in Canada, who lost 67,000 men out of 620,000 who fought. I would expect that the Royals will be participating in the WWI commemoration events next year and through to 1918.

Thanks so much for a whole batch of updates. Like yourself I find that by far my favourite of the christening photos. The intimacy between them is astonishing and has a curiously excluding effect on the viewer, as if there are things so private we never can, or should, share them. My quibble with the People version is the rather odd cropping which somehow distorts Kate's expression, I think the family group looks better with a little more distance. Maybe People are trying to get just too close!

As for Kate's shopping outfit -- it looked just fine to me. I really like that shirt, it's the kind you can grab easily on those days when you just don't want to have to THINK about clothes! And on those sort of days I too would grab my favourite cashmere, for sheer comfort and practicality, it's an amazingly tough fabric. I've found it handy in the past crammed into an overnight bag and able to emerge the other end quite unscathed.

However it's always tricky with a pale-base pattern to know whether to throw on a pale cardi or dark as I also find the former looks a bit washed out and the dark too severe. But, hey, it's only for shopping, after all!

As for Bally, I've always loved their boots and shoes both, they know how to make a high heel comfortable to wear and I've always liked that they keep up such classic styles.

Sad news about Collette. A tough decision for her -- she's made some very pretty frocks in the past.

Very nice roundup of the latest news. I am curious as to whether Kate will wear her black DVF embellished coat for the third Remembrance Day in a row, or if she will debut a new garment. Could we ever see the Duchess in a cape or capelet? Are those shapes too informal or impractical for such an occasion? What does the commentariat think?

If the Duchess is in attendance at Remembrance Day, my bet is on the black DVF coat again. Although I'm only hazarding a guess, I can see her wanting to recycle an outfit for an event following so close on the heels of the christening, where she wore the very expensive McQueen suit. Personally, though, I'm hoping she will wear a new coat with the Philip Treacy hat. I adore that hat and wish she would wear it more often.

I'm not sure about the cape/capelet idea. I don't think we've ever seen the Duchess in a cape before, which makes it unlikely she would wear one. Similar to her reliance on a single hairstyle and her trusty nude LK Bennets, the Duchess tends to favor certain silhouettes in clothing and stick with them.

While our Editor here at "What Kate Wore" may not hold licensing for the christening pics, "While Kate Wore" was linked by Vanity Fair's VF website for further info on the Christening. Congratulations on becoming such a trusted source even print mags are referring to you! It's quite a feather in your editorial cap. Well done!

Congratulations Susan, well deserved! Please keep up the good work, yours is truly the most intelligent of all Kate-following blogs! By far and away my favorite.

It's nice to see that Vanity Fair recognizes what we've all known for a very long time: WKW is the penultimate place for tasteful discussion of the Duchess's public engagements and clothing choices.

I always find it kind of funny that when Kate is out shopping she turns her engagement ring around so you cannot see it. Looking at the Zara shopping day you can see her wedding band and than the plan band of her engagement ring which she turned around. I know she has done this before. I find it funny because people are still going to recognize her even without the ring. The ring does stand out, but so does she, especially being followed by a bodygaurd. I like that she tries to blend in, but Im sorry she is a woman who will always stand out:).

Do you think she turns it around on purpose, or that she is merely being photographed at a moment when the ring has slipped backwards and she hasn't had time to set it to rights? My large rings tend to do this at various points throughout the day.