We are back with something of a ‘catch-up’ post. We begin with Children’s Hospice Week in the UK, which started Monday; the event runs through Sunday, the 17th. Together for Short Lives oversees the annual campaign. As in previous years, Kate has written letters in support, this one was sent to EACH; the Duchess is Patron for the organization. Readers will remember Kate’s work on behalf of EACH, including her involvement with the charity’s efforts to build a new children’s hospice called The Nook. Below you see her at the launch of a fundraising campaign for The Nook. All Photos by James Whatling/Splash News

If asked which of the causes Kate supports that is most meaningful to her, one would have to say it is the children’s hospice movement, at least if using public engagements as the criteria for making that determination. On royal tours Kate has made it a priority to spend time at children’s hospices. When in Kuala Lumpur during 2012’s Jubilee Tour it was Hospis Malaysia. And when the Duke and Duchess were in Australia they spent time at Bear Cottage; that visit so emotionally wrenching Kate was quoted as saying she was “ready for a big sob” following the engagement.

The topic’s importance is underscored by the fact that Kate’s public speaking engagements have involved children’s hospices. Above, Kate addresses patients, families and staff at Bear Cottage; below she is seen speaking at EACH (her first public speech) in March 2012, and also at Hospis Malaysia in September 2013. When on ‘home turf’ in England Kate’s hospice work hasn’t been limited to EACH projects, below you see her visiting Naomi House in April of 2013. Kate’s first video message was on behalf of the cause, urging support for Children’s Hospice Week in 2013.

In today’s ‘Linkage’ section we share ways to get in touch with US efforts in this arena. 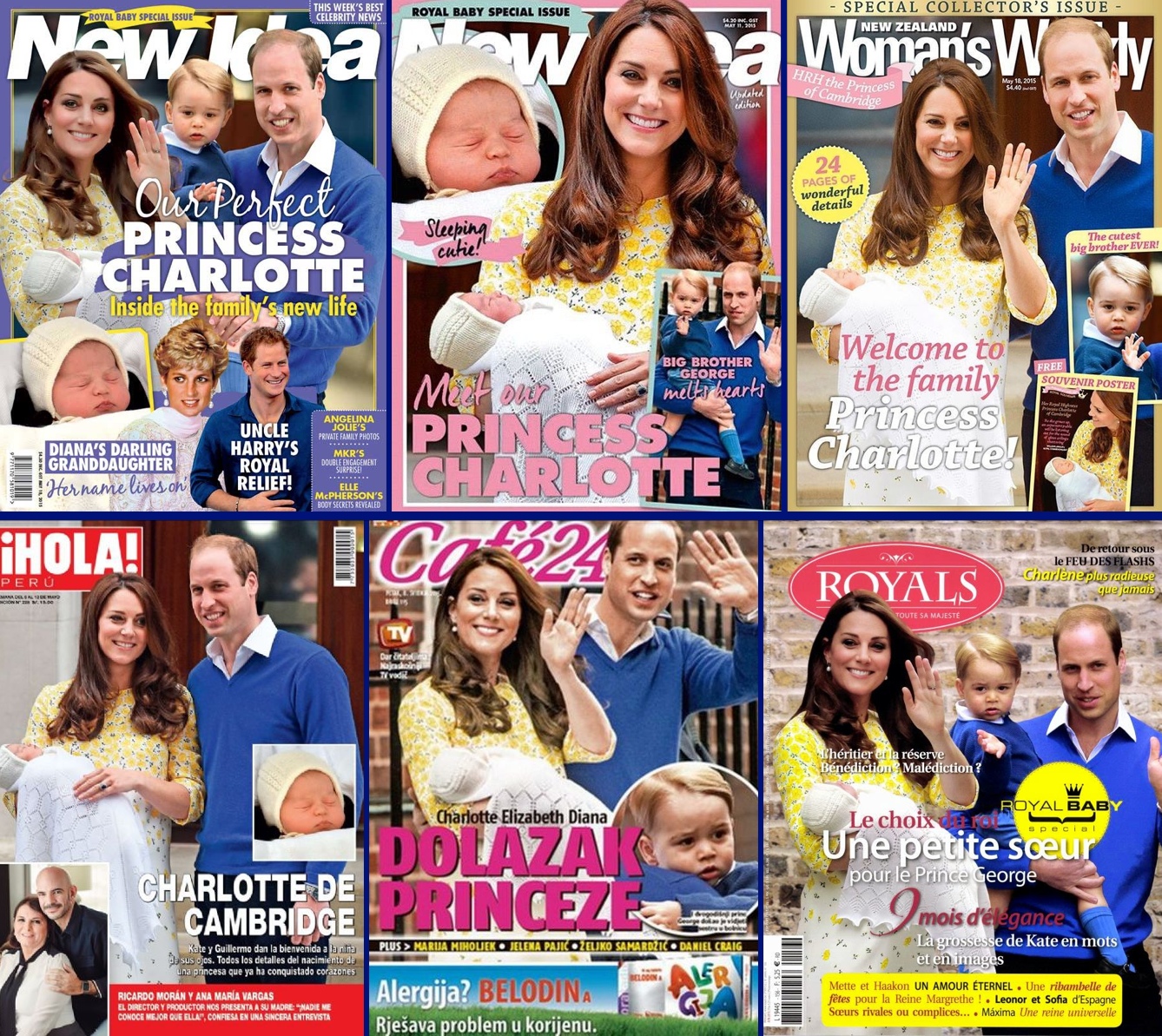 And Newsweek has a special edition out as well, described as including “… tales of Royal weddings, romance, pomp and ceremony, and a bonus section detailing the fashion frenzy surrounding Duchess Catherine and Prince George. It’s an intimate portrait of the most-talked-about Royals in the world.” We move to fashion news now, beginning with Beulah London. The company let me know they have sold out their additional runs of the Brisa Print Shawl, the piece Kate wore for the family’s trip to Anmer Hall last week.  If you pre-ordered one of the shawls you’ll be fine, no worries. But if still hoping to place an order for the popular item, no such luck – they are all spoken for and Beulah will not be ordering additional runs of the piece. Kate’s Boat Print Dress from the Alice Temperley Somerset Collection is back in stock at John Lewis, available in almost all sizes.

With thanks to Katlyn on the WKW Facebook page for the tip, here’s a great copyKate for the LK Bennett Natalie clutch. It’s the Abigale Straw Clutch at Francesca’s, regularly priced at just $44, but currently 30% off that price, making it a real steal. For anyone interested in the original bag, the Natalie is shown as being out of stock on the US site, and ‘low in stock’ on the UK site. BTW, if a UK customer, LK Bennett is doing free standard delivery on all orders for a limited time; use promo code FREE at checkout. The retailer is also offering UK customers 30% off a broad selection of shoes and clutches, the promo code for this event is THIRTY.  (Fear not, US shoppers, we will be seeing Memorial Day offers before too long.)

Hobbs has released its 2015 version of the Wessex dress, this year’s color is cornflower blue. The dress retails for $270 on the US site, and the standard delivery charge is just $5.

Below you see Kate in the original Wessex, we show her wearing the frock in July 2012 and again in April 2014 during the Australia tour. A few months ago we shared the Antonio Melani ‘Belinda’ dress on Pinterest, it is a stellar repliKate for the Zimmermann ‘Roamer’ dress Kate wore in Sydney and to Wimbledon. Since that time the dress price has been discounted, it is now permanently reduced to $101.40 (originally it was $169) and it is still available in larger sizes. Our final note in the retail section: Joules is offering 15% off all full-priced merchandise; use promo code MAY15 to receive this discount.

Irulea, the company that made the little cap worn by Charlotte on her way home from the hospital, has released photographs of that item and others that were part of the same gift for the Princess. We have individual pictures of each piece, as well as prices for the items, in this post on our What Kate’s Kids Wore site. (Please forgive the ‘look’ of the site, it’s still in the development stages!)

Finally today, an update on the Emma Bridgewater ‘Hooray for Charlotte” mug we told you about in an earlier post.

The mugs can be pre-ordered for $34.95 on the Emma Bridgewater site, but be advised shipping to the USA is £20 – that’s almost $32 at today’s exchange rates. But there is good news for US shoppers: the mug is available for pre-order at Joanne Hudson for $38.99 and that price *includes* shipping. (A big ‘thank you’ to WKW Facebook friend Trisha S. for telling us about the great deal.)

There’s more good news from Emma Bridgewater in the commemorative mug market: the pottery is re-issuing its original “Hooray for George” mug. This mug is also priced at $34.95, the company will begin shipping them May 25th; shipping rates are the same as for the Charlotte mug.  (Is this what we would term “The George Effect” in reverse? Or a pre-emptive move against the The George Effect…? Whatever it’s called, it is savvy management from Emma Bridgewater, meritorious of a speical Tip of the Tiara.)

I checked with Joanne Hudson and they are offering a *very* limited number of the George mugs, their free shipping deal applies to this mug as well. If still thinking about buying one of the the Emma Bridgewater mugs being sold as a fundraiser for the Nook Appeal, those items can all be seen here.

I love the Emma Bridgewater mugs but I would like to order them personalized with my children's names/stats on them. Wouldn't that be cute! I can't in good conscience buy them because I think it's weird - especially as an American (and therefore not a "subject" to the Royal family) - to celebrate someone else's children in this way but I really do love the design.

Thanks so much for a post to lighten up the weekend! I appreciate your round-up of Kate's hospice work, I hadn't fully appreciated how many different ones she's visited.

Interested too to see the Hobbs Wessex getting regular updates. I think I prefer Kate's grey pattern in this, the pale-blue windowpane reminds me a little too much of a café tablecloth. I like the Belinda repliKate for the Zimmerman -- the dress is improved by being neater in line and less childlike.

The Charlotte mugs are very sweet. I must admit, though, I'm glad I bought the smaller size available in the earlier Ladybird mugs as I think the Bridgewater styles come up pretty chunky. I greatly enjoyed the pottery clip, and I just LOVE WKKW!! :-)

There is no doubt that it cannot be easy for Kate to deal with the sadness visible at the hospices she visits and supports. She could opt for the easy choice and make occasional, glamorous, appearances in public. She is clearly a conscientious person, conscious of her good luck in life, who has decided to highlight and help people who need the services provided by a children's hospice. She just seems to be a very good person. One who seems to always look fabulous-even on the day she gives birth!!

I bet she would be the first to admit she has a lot of support to always look fabulous :)

I think it's so, so lovely of her to devote time to children's hospices. <3

I am not a huge fan of the Hobbs dress, but Kate makes anything look good. It's hard to imagine anything she wears looking terrible.

The 30% code on UK website only works for selected items. The code doesnt seem to work for the nina clutch

I bought it from the us site and the 30% worked but I also found a coupon code for an additional 20% off. MAY15. Maybe it will work for you since the 30% didn't.