Kate opted for a Jenny Packham gown for this evening’s glamorous, glittering premiere of the new James Bond film, SPECTRE. The Duchess was joined by the Duke of Cambridge and Prince Harry. The film is 2015′s Royal Film Performance, a benefit for the Cinema and Television Benevolent Fund. The Fund helps film and television professionals, providing “support for those facing personal and career challenges of illness, injury, unemployment or finances.” SPECTRE is the 24th James Bond film, as well as the third time a Bond film has been chosen for the Royal Film Performance. A brief description of the plot from Sony Pictures:

…a cryptic message from Bond’s past sends him on a trail to uncover a sinister organization. While M battles political forces to keep the secret service alive, Bond peels back the layers of deceit to reveal the terrible truth behind SPECTRE.

Actress Léa Seydoux plays one of the Bond love interests. Mr. Craig with both leading ladies, on the right Monica Bellucci is in a velvet Ralph and Russo dress. It seems everyone was having a good time this evening, more details from Richard Palmer’s story in The Express;

Upstairs in the Royal Albert Hall, there was the bizarre sight of Prince Harry acting like a fanboy and asking Daniel Craig for his autograph. It was hard to tell who was more excited – the actors or the royals.

During an animated chat he patted Craig down as if discussing his suit or physique and then asked to borrow a reporter’s pen to get the actor to sign his programme. Asked whether it might be for charity,  a royal aide laughed and said: “No I think it is for him.” For this evening’s engagement, the Duchess went with another Jenny Packham evening gown. Kate’s gown is based on a dress we actually showed in a September 2012 post during the Jubilee Tour. (A big thank you to Kate’s Closet for pointing this out, once again yours truly completely forgot about posting the frock back in 2012.) The dress has a halter-style top but with spaghetti straps at the shoulder, as opposed to the garment’s fabric going up to the neck and being tied in back. Kate’s gown also showcased a crossover top in the front and a full, multi-layer skirt. Perhaps the most distinctive design element is the bodice topped by a sheer overlay that is slit open on the back. The garment closes at the back neck and with a zipper in the skirt portion of the piece. Here you see the shimmering rhinestone belt and the extended row of rhinestone or crystal button/snaps at the wrist. Kate accessorized with a clutch that was also by Jenny Packham, the miniature ‘Casa’ bag:

The miniature version measures 15cm/6″ in length, which would be consistent with the way it fits into Kate’s hand, it is £325. The larger size is 20cm, almost 8″ and it is £455. The clutch is a popular piece with the celebrity set, Taylor Swift carried the clutch to the Winter Whites gala at Kensington Palace in December of 2013. (The party where Prince William got up and sang with Ms. Swift and Jon Bon Jovi, more here.)

The Duchess wore Robinson Pelham earrings, the jeweler’s Pagoda style set with blue topaz and diamonds in white gold (£14,300, about $22,000). Anna of My Small Obsessions pointed out that Carole Middleton actually wore these earrings back in 2011, for Kate and William’s evening wedding reception. And she wore her ‘Vamp’ platform sandals from Jimmy Choo.

We saw an updo from Kate this evening. This offers a better look at Kate’s hair from the front. This was the second film premiere of the day for Harry, Kate, and William: this morning they saw the new Shaun the Sheep film, although that is a 30-minute production as opposed to a full-length feature film like SPECTRE.

Kate has worn quite a few dresses in this ‘icy blue’ shade. Below, you see Kate in Jenny Packham at the National Portrait Gallery for an April 2013 event, wearing Emilia Wickstead at a Photography Awards function in October of last year, and at tonight’s premiere, and then in tonight’s Jenny Packham frock. 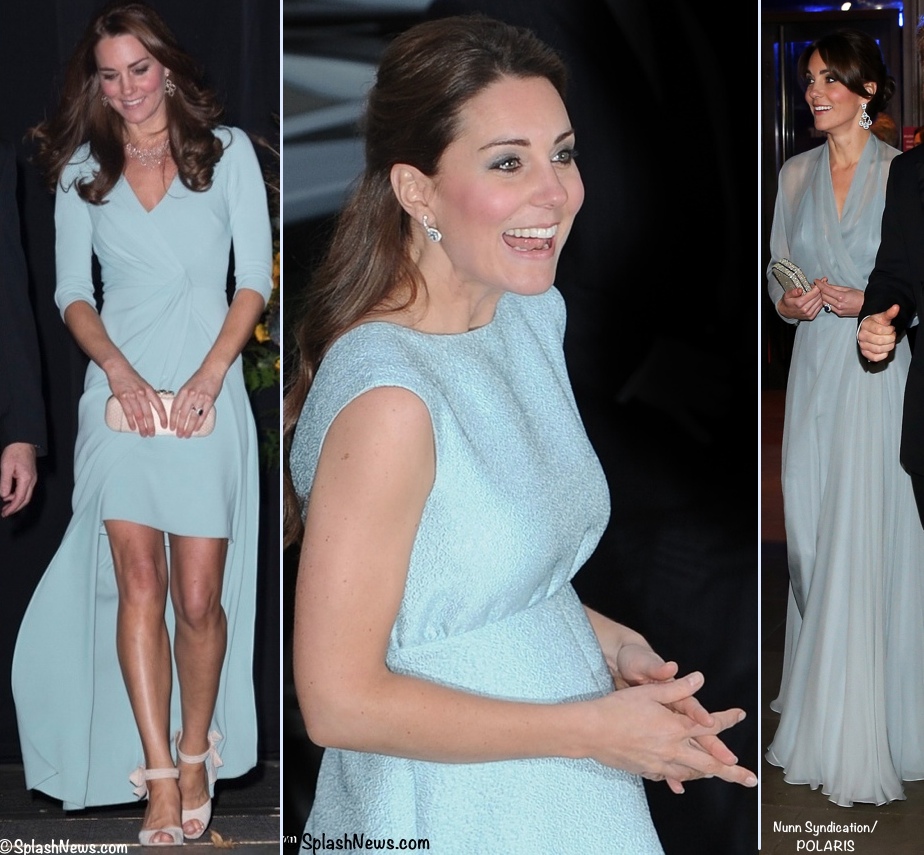 Many thanks to those commenting and messaging with suggestions for the 4th item I was trying to remember.  worn for a Mosque visit while in Malaysia during the Jubilee Tour.

Today’s dress isn’t quite as rich a color, but it struck me as being very similar; I would swear there was a fourth dress in this shade for an evening engagement, but I. With thanks to those commenting, messaging, and emailing with ideas about the fourth piece I was trying to remember, we have another montage of Kate in the icy blue hue. When worn in the evening the color really pops as seen, as seen with the Amanda Wakeley gown worn for a 2011 reception, the Christopher Kane coat at a Buckingham Palace function and that lacy McQueen gown only seen in a vehicle heading into the Queen’s 2013 diplomatic reception. The Beulah London dress worn for a 2012 visit to a mosque in Malaysia is also done in this same blue, but in daylight, it doesn’t shine the way the color does in the evening. We will see you shortly for Kate’s engagement with Chance UK’s mentoring program, along with her attendance at the 100 Women in Hedge funds dinner at the V & A.

The following garments on the shades of light/ icy blue spectrum also came to my mind:

dress with parasol mentioned before: https://encrypted-tbn0.gstatic.com/images?q=tbn:ANd9GcQNCQbdWSkSeSbZlCWpQP6GoK-i9_pV-r-DADVcfDJ7pSDTCmLkRA

I have never been a fan of this color on her save for the time she wore the headscarf. That close to her face and in natural daytime lighting, I felt that it really brightened her complexion. Otherwise, I think it tends to wash her out, particularly in a flat fabric like this chiffon. Perhaps this looks better in person and just doesn't photograph well? I also dislike this silouhette on her. I love the movement of the skirt, but the overall look is, as others have noted, a bit droopy. I could see this working well on a tall blonde like Diana, worn with a strong eye and a fair lip, or on the late Carolyn Bessette Kennedy with a neutral eye and classic red lip.

I must be one of the few that love this gown, but I am one of the younger ladies that love vintage-y looking fashions. I also love ice blue because it shows off her pale complexion. I don't believe you need a tan to wear lighter colors. The most beautiful part about Kate is that she herself is pale complected and is showing that it's okay to be pale complected. I am very pale (to the point you can see my veins in my chest!) because I cannot go in the sun for long due to lupus and I used to get horribly teased about it; since Kate has been in the media more, I've been picked on less. Ice blue looks quite lovely on her.

My favorite aspect of this outfit is the slice of skin she allows to peek through. Yes, it might be a sheer gown, but I think that's very sexy. She's very modestly covered, all things considered, yet she allows us to see the one slice of bare skin.

I'd like to comment on one thing and I guess it's because it bothers me. To see a gown/dress NEEDS this type of figure to flatter it properly is shaming a person's body. I guess this may come from the years I hid behind too big clothes when I'm actually of a boyish frame (and quite thin) like Kate, but when someone looks at me and says, "That dress needs a curvy body," it makes me cry, especially when I'm in it. I have a dress a bit like Kate's (only much less formal and no sheer overlay) and I love it to bits and pieces. I'm quite sorry if I'm being oversensitive, but words like that almost damaged my eating habits irreparably and I hope we all can find a way to be a body positive community. Please talk about how her dress fits, the colors flatters her, and things like that, but can we please refrain from such absolutes as "This gown deserves a curvier body than hers?"

I also don't think this is the most flattering look I've seen on Kate, but I also respect her choice to wear something flowy and loose with full coverage - sometimes a gal (especially a mom of 2, even if she IS a rich mom of 2...) just wants to wear something comfortable where she can just enjoy hersef and doesn't have to worry about whether the dress is perfectly placed at all times so as not to accidentally show boob/bum/too much leg etc! usually when Kate wears full coverage dresses they are close to the skin (ie. the marsala one she wore for the Chinese state visit).

The chiffon fabric diluted the blue and washed Kate out. I am brunette myself and just can't pull off the paler pastels. I think the stronger light blues look great on Kate. Camilla is the one who can wear the palest pastels---she looks great in them.