Kate in Katherine Hooker & Russell and Bromley While Out Shopping

We’re back with a very (*very*) brief post about Kate’s outfit when out doing some shopping. The photos are from Australia’s Woman’s Day magazine, our thanks to Kylie Wallace for sharing the images, they can be seen here in Anna’s post as well.

Kate is wearing a new pair of Russell and Bromley ‘Chester’ loafers.

This is how Russell and Bromley describe the Chester:

Our original heritage loafer,  Chester is everyone’s favourite go-to shoe.  The preppy silhouette complete with tassels and fringing provides the right amount of quintessential British charm to any ensemble.

Made in Italy, the shoe is navy nubuck with a half leather/half rubber sole. As of this writing the Chester is available in all sizes; it retails at £175, about $250.  It looks like a great shoe, I am guessing it is comfortable. The style is offered in a very broad range of finishes and colors. Kate’s jacket is also a new piece. It is by Katherine Hooker, the Hendre style. Here is how the the Hendre is described.

The Hendre jacket is a slightly longer style which is fitted at the waist and flares out towards the hips. It has reversible cuff bands and a small belt on the back waist.

The piece is offered in a variety of fabrics. I believe Kate is wearing the navy version shown above, crafted from a boiled wool fabric. It is a single breasted style that is a littler longer than many of the other Katherine Hooker jackets, with a fitted silhouette that descends into a slight flare at the hips. The Hendre also has mock horn buttons and chocolate brown Alcantara® suede trim on the pocket jets, inside collar, cuff-bands and back belt.  This image of the jacket offers a look at the back of the garment. Kate’s style in navy boiled wool retails at £675; that is roughly $1000 at today’s exchange rates. There is also a Hendre style that is part of the collaboration between Katherine Hooker and Pendleton. More on that partnership from a 2014 Women’s Wear Daily story:

“Since I started the business [in 2001] Pendleton was always in my mind — the idea of a mill all the way out on the West Coast of America is something I always found really intriguing,” said Hooker, who approached the mill about collaborating. She worked together with Pendleton to design the striped fabric for her Hendre and Patmos jackets, taking inspiration from the mill’s rugged horse blankets.

That Pendleton Hendre is available here.

Kate . UPDATE Aug 2017: Giulia shared a photo that shows the sweater worn at the rugby is a crewneck, clearly different from the family photo.

. (See update one paragraph above.) The sweater could date back to at least 2009. NOTE: See update below with additional thoughts on the sweater. 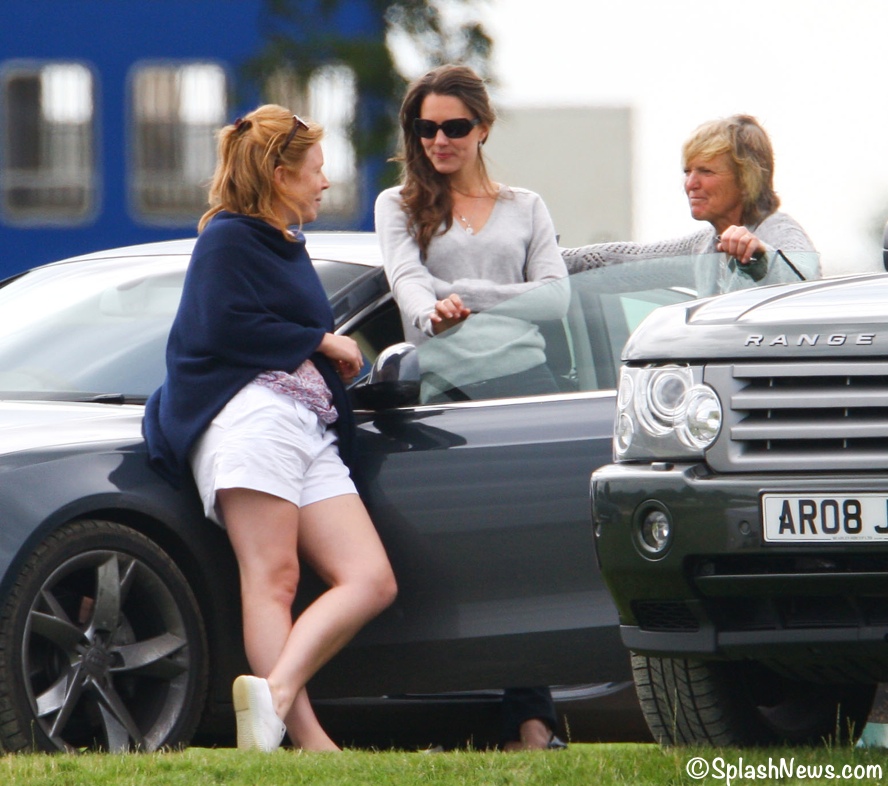 Above you see Kate at the 2009 Chakravarty Cup at the Beaufort Polo Club. Below, a closer look at the sweater seen during that same polo match. The piece looks like a basic v-neck sweater with ribbing at the cuffs and hem, or a banded piece of fabric.

UPDATE: Several comments here, as well as on Facebook, suggest the sweater shown from the 2009 polo match is *not* the same as that worn in the family photo and the new photo from when Kate was out shopping with George. Mary-Frances, Shantel, and Theresa shared input via their comments on the post. On Facebook Janice, Janet Evelyn, Jennifer Marie concur, while Janet Evelyn wonders if it isn’t the sweater seen when Kate was walking George in his pram. Jennifer Moen and several others the past few weeks noted the similarity to Zara’s Grey Oversized Sweater.

The sweater remains available in black ($19.99, but the gray is sold out.) Obviously if it is the sweater seen when walking George in 2013 it could not be the Zara sweater shown above. *Many thanks* to those sharing their input on the topic, I’m not sure it’s a mystery we’ll be able to resolve, primarily because of the lack of hi-res photos.

Kate also wore a pair of skinny jeans we have not yet identified. Prince George was in his Joules Baby Milford jacket seen before (more here), and his Start-Rite Flexy Soft Air shoes (more here).

We leave you with another reminder to pop in and vote in our polls if you haven’t done so yet. We’re seeking your input on your favorite dresses worn by the Duchess in 2015. The polls cover special occasion looks.

We’ll see you shortly for our accessories polls.

NOTE: It turns out there could be copyright issues with the photos initially used in the post so I have removed them. The issue isn’t privacy; I did not find the picture intrusive. It was taken on a public street and didn’t appear to be inflicting any distress on Kate or George. If it appeared *at all* invasive I would not use the photo. This image didn’t ‘cross the line’ in my opinion, it was not like the pictures of Prince George on the beach with Carole Middleton, or those from George’s playdate with Kate at Snettisham Park, or the photos taken inside a grocery store showing precisely what items Kate was purchasing as she checked out. Most readers know how conservative I am in this regard, that hasn’t changed. I understand some find the new photo inappropriate and I respect that opinion, recognizing we can agree to disagree.