It was a somber scene in France for today’s ceremony marking the 100th anniversary of the Battle of the Somme. The skies were heavy at the Thiepval Memorial as dignitaries arrived to commemorate what is considered by most as the worst day in British military history. Troops have been keeping vigil throughout the night in Thiepval, France, to mark #Somme100https://t.co/fVLrcdNRD8

Below you see the Duke and Duchess with Prince Harry and President Hollande as they arrive to honor the 72000 Commonwealth soldiers killed and without known graves. The group with other dignitaries. 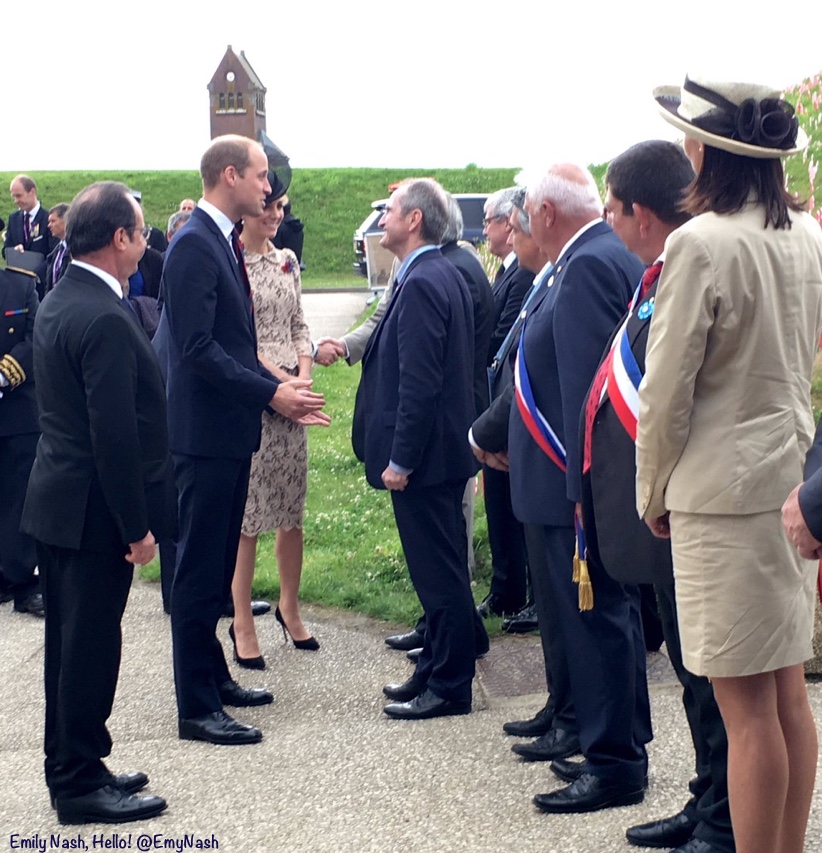 Before today’s service, the royals toured the newly renovated visitors center at the Memorial. Behind the Duke and Duchess you can see one of two 30-foot murals depicting battle scenes. A quick video inside the Museum.

William and Kate and President Hollande being guided around the #Thiepval museum in English and French #somme100pic.twitter.com/CJBQF20K2f — Emily Nash (@emynash) July 1, 2016

The pair enjoyed speaking with some of the children at the center. A 2-minute silence starting at 7:28am was observed throughout the UK. In London it was followed by the Royal Horse Artillery firing a 100-second salute. This file photo offers an aerial view of the Thiepval Memorial. Both cornflowers, the French flower of remembrance, and poppies were visible during the day’s program. The young royals arriving for the service. Today’s events were broadcast live throughout France, the United Kingdom, and many Commonwealth countries. Prince Charles and President Hollande laying wreaths at the Cross of Sacrifice. For part of the service it was rainy… …and for other portions it was dry. 10000 dignitaries, guests, and members of the public watched film footage of the Battle. From Simon Perry’s story in People.

After the sounding of the “Last Post” by buglers, the royals walked among a group of 300 French and 300 British and Irish schoolkids, who stood quietly at the gravestones. Kate and Harry speaking with some of the children. From Victoria Murphy’s story in The Mirror:

A group of 600 schoolchildren – 300 French and 300 British and Irish – laid wreaths on many some of the war graves. The Duchess of Cambridge told schoolchildren she was finding her visit to the Somme “emotional,” as she toured the new museum prior to the event From a story in The Express:

Poppy Hodgson, from Hermitage Academy in Chester-le-Street, and Neave Heaton, from Greenfield School in Durham, presented William and Kate with a binder of art, photography and history work produced by pupils taking part. Poppy said: “She said it was quite emotional being here and that they were really enjoying their visit. She said it was very moving.”

The trio just after the service concluded. Today we saw Kate in her go-to textile, lace. The dress features a Peter Pan collar and princess seaming.

Other design elements include a peplum waist, three-quarter sleeves, and eyelash lace.

The lace is by Sophie Hallette, a renowned French textile house. The firm made the lace used for Kate’s wedding gown and shoes. (More here in a Telegraph profile of the company.)  From the Sophie Hallette Facebook page:

Several people messaged/emailed & noted on the Facebook page that there is a similarity between the lace on today’s dress and that used in the Alexander McQueen seen at the Queen’s Diamond Jubilee church service and a garden party at Buckingham Palace. This is most striking when looking at the fronds; I turned the photo from the Jubilee upside down for this comparison. It certainly looks similar; wearing McQueen for this observance would very much be in keeping with Kate’s pattern of choosing designs from the brand for important, high-profile events. Here is a comparison at the hem. The scallop size looks about right, the photo on the right is closer in, which is why it might appear off.

While my personal preference is for lace at evening functions like cocktail parties, I recognize that for many the material has become acceptable, if not preferred, for daywear among younger generations.

DRESS UPDATE: It seems the dress is not by Alexander McQueen. HeavenLM got in touch with McQueen & was advised the piece was not one of their designs; she shared the company’s response on Twitter. She also reached out to Dolce & Gabbana, the company told her Kate was not wearing one of their garments. (That info was shared here.)

Kate brought back a Sylvia Fletcher for Lock and Company hat. the Lion Tamer is a signature style in our Couture collection. Hand-sculpted from layers of dyed ebony sinamay and finished with a simple ostrich feather, it elegantly frames the face.

This offers a better look at Kate’s hair. She also wore her her Gianvito Rossi heels in black suede.

And the flowers of remembrance. We will continue to update the post throughout the day as more photos become available. We leave you with a few videos. The first shows an extraordinary event, young men dressed as World War I soldiers singing “We’re here because we’re here.” Scenes like this one played out across England, Scotland, Wales and Northern Ireland today, part of a National Theatre project.

This offers a 2-minute overview of the Battle.

This video explains the Battle of the Somme in two minutes. Watch to find out more. #Somme100 https://t.co/lF6iDml1UY

I agree also , this is one of her most amazing moments . . . She as always will make the most outstanding and stylish queen and we will all do so very well in her queenship and glory . . . Z7

The dress has been identified on DM as a bespoke Jenny Packham. Please investigate and let us know your findings. If it is JP, it is a very new silhouette for JP.

The dress is an almost exact copy of the dress that Grace Kelly wore during her civil wedding ceremony to Prince Rainier.

Kate has also been wearing an exact duplicate of the mabe pearl earrings that Grace Kelly wore in Rear Window.

I hope this post won't get angry comments from Kate's fans. She could do a lot worse than copy Grace Kelly.

It works! This is a sophisticated, stylish look. The black underlay gives the lace some edge. The fit is perfect. I'll even live with the Peter Pan collar as it barely noticeable and works with the hair back. The hat is one of her best - the open brim is a subtle echo of the lace but at the same time the clean, modern lines balance out the lace. The black accessories do the same. A million times better than that boho lace at Ascot. On the other controversy. Why is it inappropriate to remark on someone's posture? Good posture used to be considered an asset, not sure why its not now.